Mickie and Chelsea even filmed a match together (Picture: WWE)

Mickie James has admitted she never understand why she didn’t get to work with Chelsea Green on WWE TV.

The current IMPACT Wrestling Knockouts Champion – who will defend her gold against Deonna Purrazzo at Hard To Kill on January 8 – got fans talking as she and Chelsea built of a potential storyline on social media, which was very reminiscent of Mickie’s own stalker plot with Trish Stratus in 2005/06.

However, despite both stars being very keen – and fans on Twitter responding positively to the idea – it was never explored on screen.

Mickie exclusively told Metro.co.uk: ‘Within the pitch of Chelsea Green on the way out, it would’ve been a perfect, magical re-circling way to build Chelsea and elevate her and make her a star as I was transitioning to find my foot into this other [backstage] role.

‘For me, I felt like it was the perfect set of business but didn’t seem to hit on that level, and whatever. I don’t wanna say, “I get it” because I don’t get it.

‘I know that that story would have been money and I know that would have ended up probably rivaling Trish and I’s angle, because it was going to mimmick and mirror it, but in a different capacity so well.’ 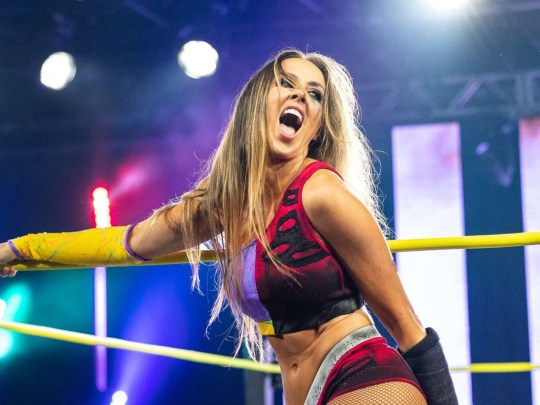 Both Mickie and Chelsea were released from WWE in April 2020, and while the company hasn’t used their ideas with other performers, the veteran admitted that wouldn’t be unusual in the wrestling world.

‘There’s been a lot of times where I’ve pitched ideas and they’ve went to somebody else. Or I’ve itched ideas and I thought they were really good, and they – that’s always the most disheartening thing,’ she admitted.

‘When you pitch an idea and you know and believe it’s really good, and they kinda ho-hum it, or they’ll thumbs down it a bit but then they used the exact same idea for someone else.’

Mickie wouldn’t go into detail on what those other pitches might have been, but she said her attitude when it does happen is to hope the other star makes the most of the opportunity.

‘There’s a lot of stuff – and I don’t sit here and like to give away all the stuff behind the scenes, because there’s a but of magic to it,’ she smiled. ‘But at the end of the day, I’ve been in wrestling for a very long time so I’ve seen that and had it happen to me a fair about of times.

‘I just hope that when those ideas, if they’re used on someone else, that that person can either deliver better than I was going to – which a lot of times they don’t, or sometimes they do – or that they tell it the right away, or tell it in a way that means something to the people.’

Mickie noted that, beyond title reigns and big wins, the root of the wrestling business is ‘that emotional connection’ through the stories the stars are telling in and out of the ring.

‘That’s what I’m always about. I’m about the stories, I’m about that emotional connection and taking people on those rides,’ she said. ‘At the end of the day, it’s drama. What makes people care about wrestling is being connected to those characters.’