Are Amy and Josh still together? (Picture: E4)

Married At First Sight UK fans think they’ve stumbled on a clue that may confirm if Josh Christie and Amy Christophers are still together after the so-called experiment.

Turns out it looks like they might still be an item despite viewers being shocked by their explosive rows, which have only heated up throughout the series.

Amy recently shared a snap of the couple looking particularly snug while filming the E4 programme.

One fan wrote: ‘Great couple, hoping you two make it!’ because who doesn’t want love to work, right?

Well, Amy’s response implies love is definitely still on the cards, popping the emojis ‘❤️?’ beneath.

Josh has also shared several pics of them looking cosy, posting photos of their honeymoon and home stays on Instagram. 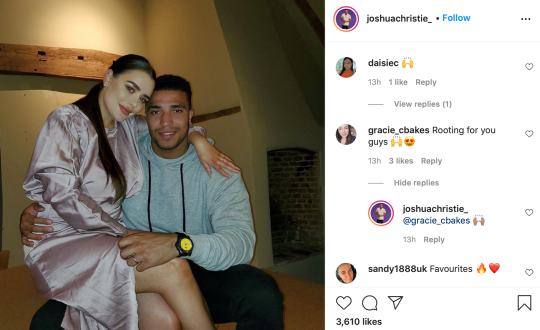 When one fan said they were ‘rooting’ for Amy and Josh, he replied with the positive hands up emoji.

It’s been quite the week for Amy and Josh as he confronted Morag Chricton who claimed he added her on social media and liked her photos on social media.

But actually some clever sausage managed to find the photos Josh liked and they’re probably not the images you were expecting.