Trying to impress! Before Machine Gun Kelly and Megan Fox officially started dating, the rap star was intent on impressing her from the start — despite a painful injury that could have stood in his way.

“It was bad,” the Dirt star, 31, revealed of his coccyx injury on the Wednesday, December 1, episode of The Tonight Show Starring Jimmy Fallon. “I had a match with Post Malone in a beer pong game. You know, when you get the cup and start drinking? We didn’t even get to the game and I started drinking, and so they filmed on the way out, they did, like, a Rocky, like, boxing match film on the way out. I couldn’t take the pressure of the camera, so I was like, ‘Every five steps, I gotta do something cool,’ because it’s, like, 500 steps, I don’t want to just walk.”

Something “cool” turned out to be sliding down a banister, which the “Rap Devil” musician didn’t realize had a spike sticking out of it at one point. While Kelly (real name Colson Baker) attempted to play his injuries off nonchalantly, he admitted the timing was less than ideal.

“This was also right when I started to date Megan and I was holding it together,” Kelly, who wore a shirt with his 35-year-old love’s face on it, admitted to Jimmy Fallon. “It was a bad night. I won the beer pong match, I went home [and] Travis [Barker] got me this knife that had an engravement from the new album on it, and I was like, ‘Check this out. This is sick.’ And I threw it up, and it stuck in my hand.” 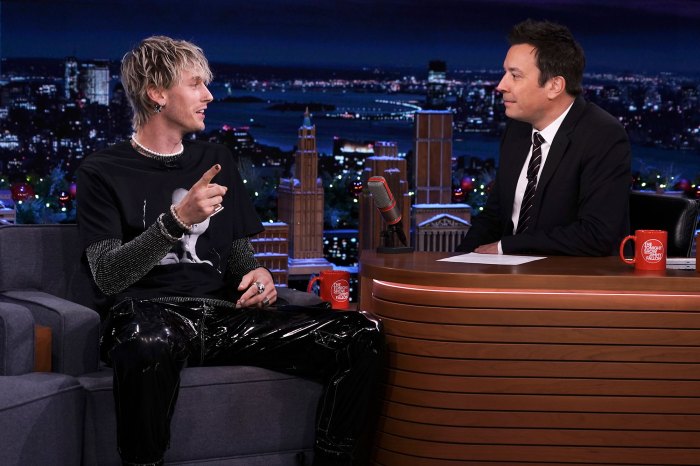 He continued at the time, “You know how you throw it up, and you’re supposed to catch it? I looked at her, and I was like, ‘Check this out.’ And then the next morning as soon as she left, I was like, ‘Yo, I need stitches real quick. I’ve got a bruised coccyx and a knife in my hand.’”

The Jennifer’s Body star and the “Bloody Valentine” crooner first met on the set of Midnight in the Switchgrass in March 2020. They began dating two months later amid her separation from Brian Austin Green, with whom she shares sons Noah, 9, Bodhi, 7, and Journey, 5. 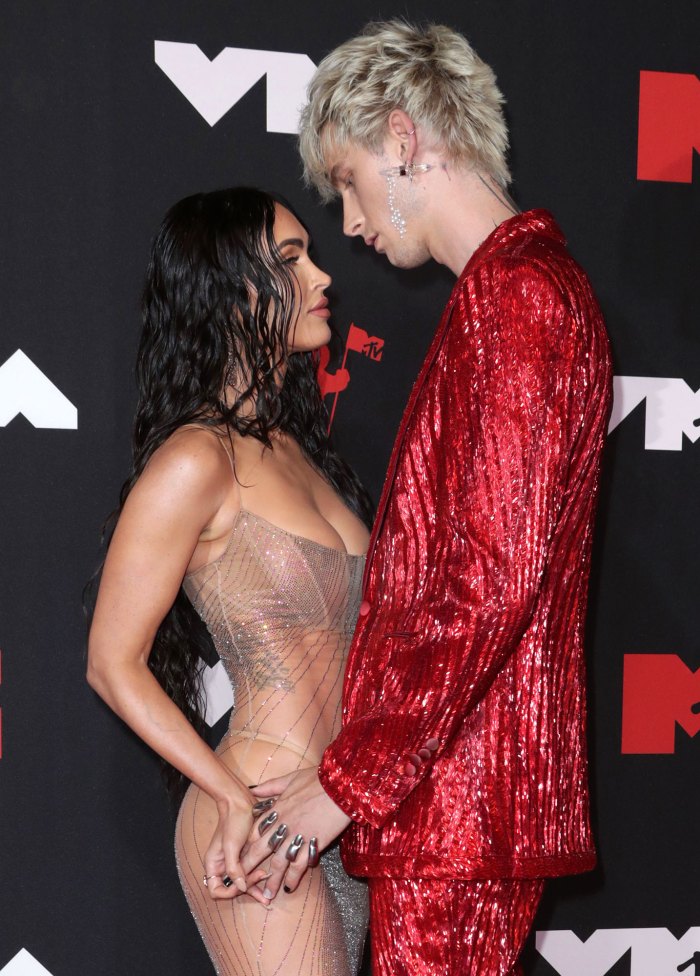 “Megan and MGK have gotten more serious and are officially dating and referring to one another as boyfriend and girlfriend,” a source told Us Weekly exclusively in June 2020. “They’re enjoying spending more and more time together and have a strong connection.”

Since then, the pair’s relationship has continued to heat up as they frequently pack on the PDA on red carpets and via social media, as well as publicly discuss their intense connection.

“I was like, ‘Who is going to play this role?’ And [Randall Emmett] was like, ‘Oh, we just got Machine Gun Kelly,’ and immediately, I was like, ‘Uh oh,’” the Transformers actress revealed on a July 2020 episode of the “Give Them Lala … With Randall” podcast (currently the “Give Them Lala” show), even referring to the musician as her twin flame. “I could feel that some wild s–t was going to happen to me from that meeting, but I wasn’t yet sure what. I just felt it like, deep in my soul.”