LOVE Island star Eve Gale has been spotted almost bursting out of a low-cut swimsuit in a raunchy new social media post.

The reality TV star posed in the tight-fitting blue swimwear as she took a dip in the sea as she holidayed in Ibiza, Spain, this week.

Eve, 23, placed her hands above her head and ran them through her long blonde hair as she posed for a series of saucy snaps.

Showing off her incredible figure, the former Love Island contestant wore a low cut swimsuit that hugged her curves.

The cut-out number featured a slit going down to her belly-button, revealing her ample assets that almost spilled out of the top.

Eve closed her eyes as she showed off her minimal make-up look, which featured false lashes and perfectly groomed brows. 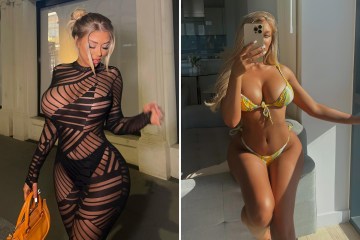 “Just add water,” she captioned the two snaps, which saw her swishing her wet hair back and forth in the sunshine.

Fans and friends went wild in the comments section over her latest look, including a number of reality TV stars.

It comes after Eve and Jess opened up about being BANNED from wearing certain bikinis while on Love Island.

During a recent interview, the girls confessed to having some rather racy bikinis which were not allowed to be worn on camera.

She continued: “I had a bikini and it was the real thong one like the Oh Polly ones, it wasn’t nude, but it was thong.”

Jess added: “I was wearing an Ann Summers one and because it’s a family TV show they were like this is inappropriate.”

Last month, Eve sent fans wild with a sexy sun-kissed selfie just days before the return of the new series of Love Island.

Her lookalike sister Jess said she was “glowing” while other ex Islanders like Demi Jones, Sophie Piper and Yewande Biala were all full of praise.