Love Island fans have been unable to sleep after the show’s official Twitter account shared photos of what appeared to be a cosy conversation between Brad McClelland and Kaz Kamwi, which for reasons unknown didn’t make it to air.

What did they say? Why didn’t Love Island show it? Give us more!

After the first coupling of the series, Brad was partnered up with Faye Winter while Kaz is currently coupled up with Toby Aromolaran.

While the Chloe Burrows-centric episode was packed with date after date, viewers were far more interested in learning about the potential romance between Brad and Kaz when, as it stands, there’s been very little love in Love Island.

Metro.co.uk’s resident body language expert Judi James even told us all the couples are doomed already.

But perhaps there is more going on behind-the-scenes… 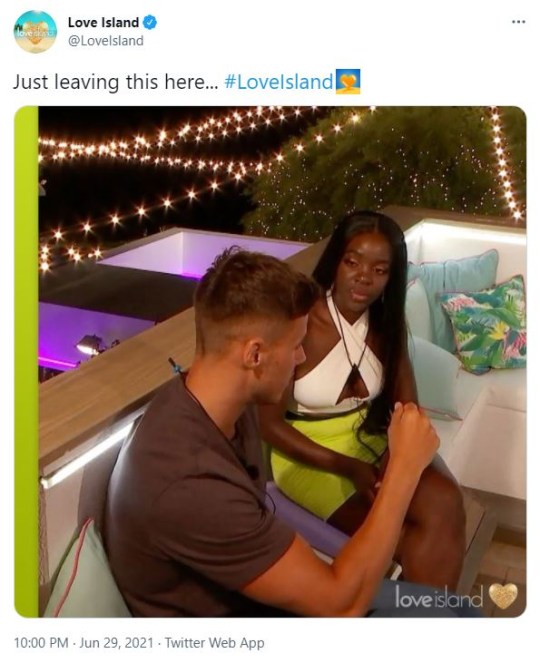 What is Love Island doing to us? (Picture: ITV2)

Regardless, fans are totally shipping Brad and Kaz already and gagging to know more but baffled as to why we didn’t get all the info on screen.

How did the happen????? Are they just being good friends or is there something more there??? I’m actually really curious however with that said I think Brad and Kaz would make a lovely couple. Brad’s a gentleman and Kaz has a great personality â¤ï¸ #Loveisland I’ll call them #Braz https://t.co/TLpjvx4Tqe

Love island producers for showing Kaz and Brad having a convo in the preview, dedicating the whole episode to Chloe and, then posting a pic of them after the episode#LoveIsland #loveisland2021 pic.twitter.com/8nqJAFPRZu

Kaz might have competition, however, in Holly Willoughby who has been swooning over the 26-year-old on This Morning.

Speaking to Love Island 2019 winner Amber Gill, Holly said: ‘Great accent. It did take me a couple of seconds, because he sort of just talks.’

The presenter added that he’s ‘gorgeous’, with Amber agreeing he was ‘so beautiful’.

‘We’ll see what happens with him,’ said Holly. ‘He seems like quite a nice boy as well, he does seem like a sweetheart.’