Things are set to heat up in tomorrow’s instalment of Love Island as Andrew Le Page and Dami Hope get a little friendly with the new girls.

Casa Amor opened its doors for business on Friday night with a fresh batch of boys and girls ready to ruffle some feathers.

However, it was the new girls that stole the show in Sunday’s edition as they immediately put Andrew in the hot seat and questioned his compatibility with Tasha Ghouri.

Although he tried to brush off the comments, Andrew revealed he couldn’t help but feel like a ‘t*t’ following the girl’s observations.

Elsewhere Dami was seen getting to know Summer Botwe, and while things started off friendly, Tuesday’s teaser showed the bombshell leaning in for a kiss, while Andrew also looked ready to smooch Coco Lodge. 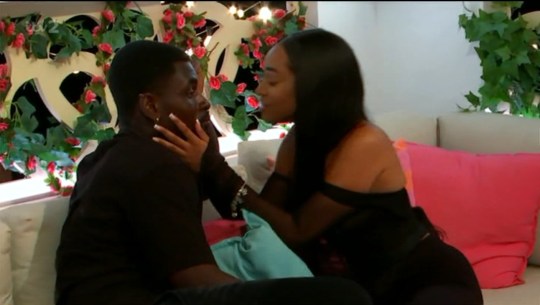 Dami was in a secure couple with Indiyah Polack, but has his head been turned? (Picture: ITV)

‘Dami, Jaques & Andrew did nothing but make me want to remain single for the rest of my life,’ one person wrote.

‘I’m not sleeping well tonight but it hasn’t even been a DAY and Dami is out here kissing?!?!?!.’ another added.

‘The only thing calming me down was that she made the first move on Dami and leaned in,’ a third person tweeted.

Elsewhere, the OG girls are also getting to know the new boys with Gemma Owen clarifying her relationship with newcomer Billy Brown.

‘Wait Gemma follows Billy on Instagram,’ one pointed out, while another said: ‘Okay but why is nobody talking about how Gemma knows Billy.’