One viewer slammed Sharon’s remark as the ‘most ignorant thing ever’ (Picture: ITV)

Love Island viewers have criticised Sharon Gaffka for ‘comparing race to cosmetic surgery’ during her chat with Hugo Hammond over his ‘fake’ remark in tonight’s programme.

On the latest episode of the ITV2 show, Hugo found himself in deep water after taking part in a couple’s challenge, where the islanders were tested to see how well they know each other.

At several different points during the game, Hugo emphasised that he’s not attracted to ‘fakeness’, which upset Faye Winter and Sharon, who took offence given they have had cosmetic procedures in the past.

After being made aware of the upset he caused, Hugo took Sharon to one side to apologise to her directly.

Sharon told Hugo that while it’s ‘fine’ if he’s ‘not into fake stuff or girls that look really fake’, he doesn’t ‘know the reasons why we’ve had stuff done’. 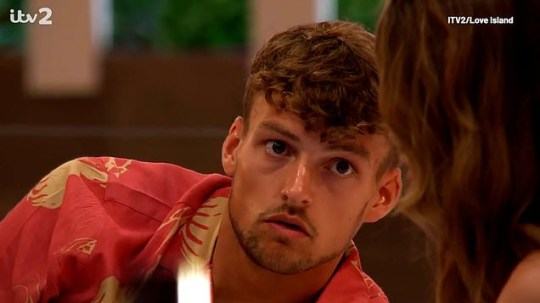 Hugo was apologising to Sharon when she made her comment (Picture: ITV)

Several Love Island viewers were taken aback by Sharon’s comments, with one saying that ‘comparing cosmetic surgery to race’ is the ‘most ignorant thing ever’.

‘Still can’t get over that fact Sharon compared plastic surgery to race,’ one person tweeted.

I can’t believe what I just watched….over plastic surgery?! And Sharon putting race in the same boat…naah! #loveIsland

Sharon comparing cosmetic surgery to race is THEE most ignorant thing ever! #loveIsland

I just canât believe Sharon really sat that and compared plastics surgery to race lol. I am just done #LoveIsland

Someone else wrote: ‘I just can’t believe Sharon really sat that and compared plastics surgery to race lol. I am just done.’

Another fan said: ‘How can Sharon compare not liking plastic surgery to not liking someone’s race??’

After Sharon’s confrontation with Hugo, she said that she forgave him, before he also buried the hatchet with Faye.

While tonight’s episode of Love Island was filled to the brim with drama, tomorrow’s instalment looks like it’s going to also pack a punch.

Following the arrival of Lucinda Strafford and Millie Court, a teaser for tomorrow showed Brad McClelland almost certainly having his head turned by Lucinda, leaving a devastated Rachel Finni crying in the Beach Hut.

Liberty Poole will also be concerned about her partner Jake Cornish, after he admitted he could be swayed if another blonde islander entered the villa.

Love Island returns tomorrow at 10pm on ITV2 and is available to watch on ITV Hub.