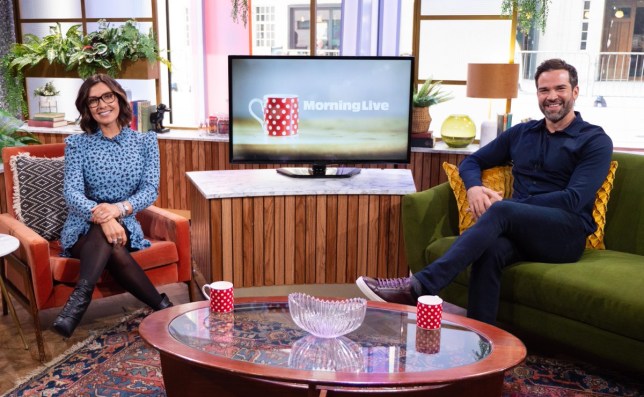 BBC’s Morning Live has launched with impressive ratings, making history with the highest number of viewers in the 9am time slot.

The new show, which is hosted by Coronation Street’s Kym Marsh and The One Show’s Gethin Jones, kicked off on Monday and had an audience peak of 1.5m viewers.

For comparison, Lorraine is said to have brought in an average of just 892,000 viewers last week, according to BARB.

Sharing the news on Twitter, a BBC spokesperson said: ‘#MorningLive launched with a peak audience of 1.5m viewers and a 26% audience share – the highest in its time slot! Follow @BBCMorningLive to join the conversation.’

Morning Live is slated as an entertaining mix of topical content and expert advice, perfectly placed to reflect and respond to viewers concerns at the start of the day, with The One Show closing the day on BBC One in the evening.

The mix of content aims to both entertain and inform viewers, providing great company and the kind of trusted expertise viewers have come to expect from BBC Daytime’s popular factual and flagship series.

‘I think the nation really needs it at this point in time, just having familiarity and also something to look forward to,’ he said.

‘I’ve got a front row seat in one of the best shows ever.

‘I’m lucky, I have been starved of entertainment the last eight months, I really have.’

At the start of the programme, Kym announced: ‘Every morning for the next eight weeks we will be here to get your thoughts on the things that matter most to you, and we are not only here to listen, we really want to solve some problems too.’

Morning Live airs weekdays at 9.15am on BBC One.

I had a miscarriage in July like Meghan Markle, it was my third & I’ll never get over it– I didn’t know I was pregnant