Lorraine Kelly admitted she’s been anxious for the Queen after she pulled out of yesterday’s Remembrance Sunday service at the Cenotaph yesterday.

Buckingham Palace announced Her Majesty, 95, would not be attending the event in central London just hours before she was due to arrive due to a sprained back.

It comes after the monarch has cancelled two recent trips and stayed in hospital overnight for the first time in eight years last month.

In turn, during today’s Lorraine, the host admitted she was ‘worried’ because for ‘her not to turn up about this event of all things’.

Instead, Prince Charles fulfilled his mother’s duties to lay a poppy wreath on the memorial.

‘I’ve never seen him looking so upset, I don’t think,’ she added.

A statement from the Palace insisted the Queen had ‘great regret’ over missing the poignant ceremony.

‘The Queen, having sprained her back, has decided this morning with great regret that she will not be able to attend today’s Remembrance Sunday service at the Cenotaph,’ the announcement read.

Her Majesty is disappointed that she will miss the service. 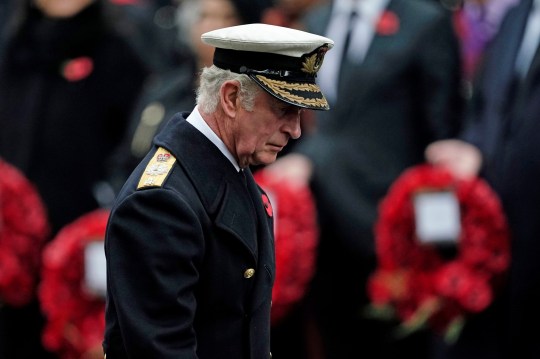 Prince Charles filled in for his mother (Picture: REUTERS)

‘As in previous years, a wreath will be laid on Her Majesty’s behalf by The Prince of Wales.

She has only missed the service six previous times in her 69-year reign due to pregnancy or overseas travel.

Lorraine airs weekdays at 9am on ITV.