Nadia Sawalha has admitted she doesn’t know if she’s a ‘true altruist’ as the Loose Women panel discussed the Government’s new Homes for Ukraine scheme.

She also voiced her hesitancy over committing to offering her house to refugees fleeing Russia’s invasion, as she thought about the practicalities.

The new scheme asks British citizens to sponsor individuals or families to stay with them, or to offer another home for them to live in rent-free, in return for a £350 monthly payment.

Those who sign up to the scheme will be asked to commit to a minimum of six months.

As Nadia discussed the visa scheme with Ruth Langsford, Linda Robson and Carol McGiffin, she said: ‘My first thought is, “Oh how many people can I take in?”, before adding: ‘My second thought is I know myself very well and I think I’m a great starter and a terrible finisher and I could just see that I would get completely overwhelmed.’

Listing the realities of other commitments she juggles, including elderly parents and full-time work, the actress said she fretted over ‘whether I would be available enough’ to help someone through the scheme.

Nadia was honest about her own possible shortcomings (Picture: ITV) 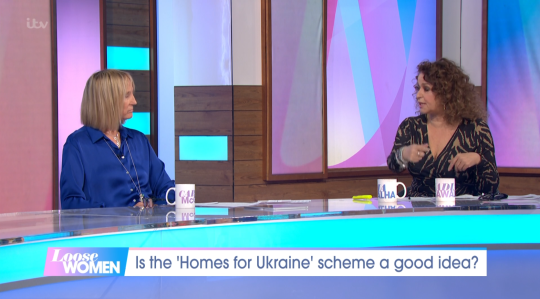 The panel had a frank discussion about the downsides of the scheme (Picture: ITV)

‘I think we have to no what our limits are,’ she explained. ‘So I’m looking at other things, like there are websites where you can buy things directly from Ukrainian people and then not take the goods but you give them money, there’s fundraising – I will be moving much more around there because I don’t think I’d be good at it.

Altruism is defined as selfless concern for the well-being of others, that could even benefit another at your own expense.

Former This Morning star Ruth agreed, adding: ‘I’m in awe of people who say they’ll do it and then do it, follow it through.’

She continued: ‘My initial reaction is like “Yes, that would be a lovely thing to do.” I could fit them in my home but then the reality bites – but you’re never at home, and you’ve got your mum and where would they sleep, and when you look into the details, they’re asking you to commit to this for six months minimum.’

Carol also branded the scheme ‘too much too soon’.

‘A lot of people are saying this is too little too late I think it’s too much too soon, I honestly do, because it just has not been thought through.

Loose Women, which was forced off air on Thursday after a security alert, has been axed from the rest of this week’s TV schedule to make way for live coverage of racing at the Cheltenham Festival, with it set to return to air on Monday March 21.