The Loose Women set literally fell apart as the panel opened up about their childhood sweethearts on today’s programme.

The ITV daytime show was rudely interrupted when a piece of the wall panelling collapsed forward onto another pop-up wall, giving presenters Charlene White, Coleen Nolan, Jane Moore and Storm Keating a fright.

The foursome had been talking about whether they would have married their former childhood partners, as England captain Harry Kane is loved up with his, Katie Goodland.

‘I was with my first love for about four years,’ Coleen said, but was quickly brought to a standstill after hearing a loud crash.

‘Sorry, that’s just part of the set,’ Charlene explained. ‘It’s not normally a health and safety nightmare like this.’

Coleen added: ‘I’m not being funny, but the budget for this show is off the scale.’

Part of the set fell off its hinges during today’s Loose Women (Picture: ITV) 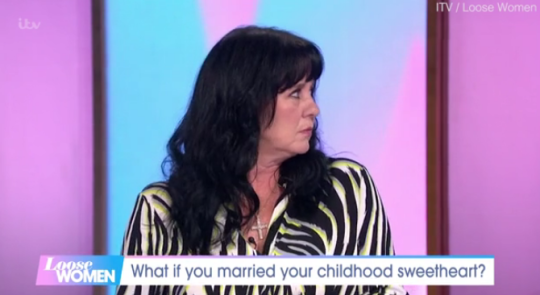 Coleen Nolan had been in the middle of a story when disaster struck (Picture: ITV)

‘The sticky back plastic isn’t working great,’ Charlene joked, as the presenters began to laugh. ‘Don’t worry, somebody is going to secretly go backstage and pick it up while Coleen talks.’

Luckily, none of the presenters were injured during the incident.

Viewers were in stitches at the unfortunate blunder and rushed to Twitter to comment. Some even pointed out that a repairman, who walked out onto the set in a bid to repair the issue, was using a BBC branded ladder.

Haha part of the Loose Women set has fallen down live on air!

‘Even the set has had enough of #loosewomen and we are only 20 minutes in,’ wrote one.

‘The set is falling apart. How apt,’ another penned.

Elsewhere on today’s show, Charlene revealed she fell down the stairs on Sunday night after England’s Euro 2020 final match against Italy.

‘So, I popped upstairs to check on the kids, to make sure all of our screaming hadn’t woken them up.

‘As I was coming down the stairs I just wasn’t concentrating, and I slipped and I think I probably fractured my toe.’

She added: ‘So I’ll be hobbling around for the rest of the week I reckon, unfortunately.’