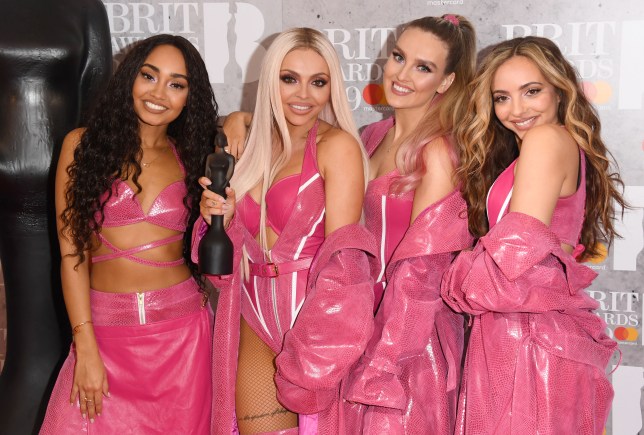 Little Mix have never shied away from a saucy jam and their new album Confetti is no exception.

No doubt fans of the former X Factor winners have been counting down to today as they get to hear what Jesy Nelson, Jade Thirlwall, Leigh-Anne Pinnock and Perrie Edwards have been cooking up in the studio.

The singers have released Confetti, their sixth album, which follows 2018’s LM5.

My Love Won’t Let You Down, Breathe and, of course, Confetti have been praised as highlights by fans.

There’s also a cheeky dig at their former boss Simon Cowell in the track Not A Pop Song, which refers to them leaving his record label Syco.

However some other tracks have got listeners hot under the collar…for reasons.

In this track the ladies spell it out to a lover (or rather a booty call) that they’re in the mood.

They sing: ‘Say if you need a ride/I could be right outside/Pull up in your driveway/Take you to paradise/We can go anywhere/As long as we take it there/Nothin’ that I won’t do.’

Little Mix also sing about ‘clouding up the window’ and demand of their partners: ‘Let me hear you say my name’.

Nothing But My Feelings

This track sees them reminiscing about an old flame who they know is bad for them, but they can’t help but think about how good the physical side of things was.

Basically they’re totally naked (wearing nothing ‘but my feelings’ – oh, and some diamond earrings) and waiting for some action.

Jade sings at the start: ‘I’m layin’ here in nothin’ but my feelings/Thinkin’ ’bout our shadows on the ceiling/Waitin’ for you/So you should probably come through/If you know what’s good for you.’

Holiday is in a similar vein to Touch as they sing to their lover about how good they are in bed.

The lyrics include: ‘Wanna have a little taste, so let me lay you down/Nothing better than your skin on mine’.

Of course, the album has something for everyone. There’s another girl boss anthem in Gloves Up and the group explore learning to love themselves in Happiness.

Fun and fierce, Confetti is a hit with their passionate fans and will ensure the foursome are around for years to come.