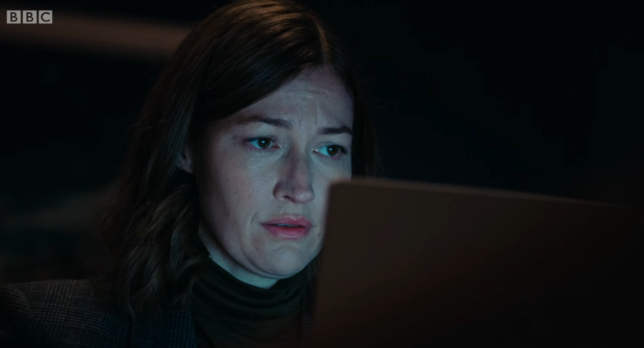 Line Of Duty series 6 episode 3 left on an almighty cliffhanger with DCI Joanne Davidson messaging an unknown character to confirm that she’d successfully managed to throw Detective Superintendent Ian Buckells under the bus.

In the closing scene, the newcomer, played by Kelly Macdonald, was seen using the very same software that John Corbett’s (Stephen Graham) OCG gang had implemented to communicate with ‘H’ in the previous chapter.

Alone in her apartment, Joanne told the mysterious Unknown User: ‘All under control now’.

But just who is Joanne messaging?

At this point in time, it remains unknown as to whether Joanne is the elusive ‘H’ character after all or whether she’s being blackmailed and is being forced by the OCG to carry out tasks in return for help.

If she is in fact under order, her comments about her family being estranged could also have something to do with it? 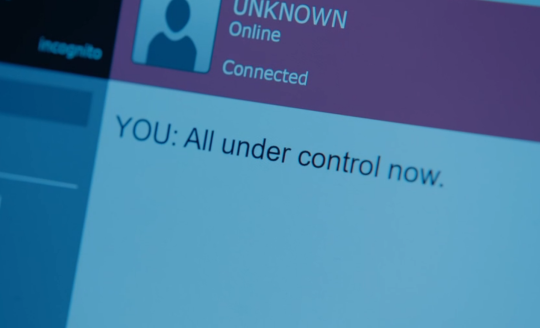 What is Joanne up to? (Picture: BBC)

Fans have been busy sharing their theories far and wide on what could possibly be going on, with many suspecting that Joanne is being blackmailed and that H still remains at large.

‘I’m gonna go with the theory that Davidson is being blackmailed by Unknown User (H) to frame Buckells because they have Jo’s mum and that’s why she launched her glass at the framed photo in previous episode,’ wrote one.

‘Davidson isn’t dodgy by choice,’ another added. ‘The OCG definitely has something on her and are using it to manipulate her into doing stuff. That’s been the OCG’s way of operating, blackmail.’

Davidson isnât dodgy by choice, the OCG definitely has something on her & are using it to manipulate her into doing stuff. Thatâs been the OCGâs way of operating, blackmail #LineOfDuty

However, another suggested that Joanne knows exactly who H is and is actually trying to expose them.

‘Davidson is indeed a bent copper, but one trying to bring down H because they’re closer to home than anyone even thinks,’ they penned. ‘The fourth “man”? Davidson’s mother. Davidson’s mother? Wise (fringe lady).

‘She’s working for H to try and take them down from the inside. She’s willing to do whatever it takes to take them down, even if it means destroying her own life and career.’

While fans aren’t convinced that Joanne is H, a glaring sign in the latest episode linked Stephanie Corbett (Amy De Bhrún), the widow of DS John Corbett (Stephen Graham), to the character.