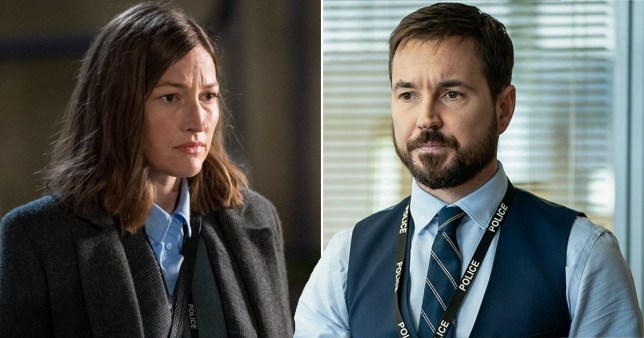 According to Martin, there’s only ‘one credible explanation’… (Picture: BBC)

Warning: major spoilers ahead for Line of Duty.

In the final scene of series six episode four of the crime drama, it was revealed that Jo has a ‘blood relative’ of particular significance.

As Ted Hastings (Adrian Dunbar) reacted with shock to the huge revelation presented to him by Steve Arnott (Martin), Line of Duty viewers craned their necks to try and catch a glimpse of the document on his desk in the hope it might provide a clue.

It turned out that Jo’s relative didn’t appear on screen, but that hasn’t stopped fans from speculating over who it could be, with guesses ranging from Tommy Hunter to John Corbett and Jackie Leverty.

If viewers turned the subtitles on, this also let a vital clue slip regarding the identity of the unknown individual.

Despite the enormous amount of effort going into viewers’ guesswork, according to Martin, the answer is very simple.

Quote-tweeting the clip from Line of Duty where the relative was discussed, the actor wrote: ‘Only one credible explanation…’

Oh Steve why do you tease us like this!

Several fans of the show expressed their frustration over Martin’s baiting tweet, while also saying how excited they are to find out the truth.

‘This waiting week to week isn’t good for the blood pressure,’ one person wrote in response to his remark.

‘Stop teasing Martin,’ another commented, with an angry emoji.

‘I can’t cope with all this teasing,’ someone else said, while another fan tweeted: ‘This season has been a real mind bender, looking forward to Sunday!’

The upcoming episode of Line of Duty will see Anna Maxwell Martin return as Detective Chief Superintendent Patricia Carmichael, having last been seen in series five.

Patricia was previously brought in as an independent investigator from AC-3 after suspicions grew over the integrity of fan-favourite Ted.