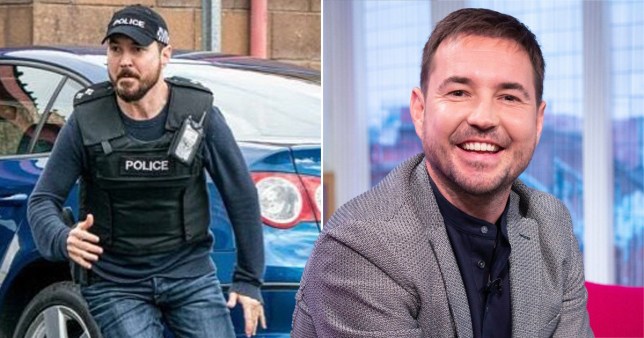 Line of Duty star Martin Compston has teased that fans will need to have their seatbelts fastened when they watch series six episode five, warning that they’re going to ‘need therapy’ by the end of it.

During the latest episode of the BBC crime drama on Sunday evening, viewers were gripped as they watched Steve Arnott (Martin) engage in an intense shoot-out, escaping with his life thanks to a stellar shot at a sniper above him.

Steve clearly hadn’t gone rusty since his days as an authorised firearms officer, with several fans tweeting that they were holding their breath as they watched the action-packed scene unfold.

But if people thought that the drama had peaked in episode four… they’re going to be in for a surprise, if Martin’s latest Instagram post is anything to go by.

In the picture shared by Martin on the social media platform, Steve can be seen mid-run, wearing a police vest and cap over a pair of jeans and a casual sweatshirt.

‘Episode 5 kicks off as stores re-open and there’s a sale on waistcoats. In all seriousness though if you thought Ep 4 ended on a cliffhanger, you’ll need therapy by the end of Ep5,’ he wrote in the caption. The suspense!

In response to the actor’s warning, one fan wrote: ‘Joke’s on you I’ve needed therapy since the end of the first episode.’

Someone else implored Steve to ‘watch his back’ amid the character’s painful back injury.

‘All we are interested in is bent coppers,’ another said. ‘Neck’s still not recovered from cranking it on Sunday to get a glimpse of who’s on the next page.’

At the end of episode four, viewers were left scratching their heads when it was revealed that DCI Joanne Davidson (Kelly Macdonald) has a ‘blood relative’ of interest.

Fans went to extreme lengths to try and figure out who it is, with numerous people pausing the programme, rewinding and looking at the TV upside down in an attempt to work out the mystery.

As if Line of Duty was going to let viewers in on the secret that easily!