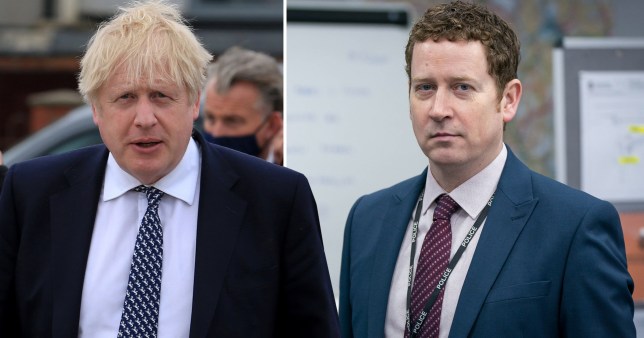 Do you believe theory that Buckells may be based on prime minister? (Picture: Lindsey Parnaby/Pool via Reuters / BBC)

Warning: spoilers ahead for the series six finale of Line of Duty.

Fans of BBC crime drama Line of Duty have speculated that former Detective Superintendent Ian Buckells (Nigel Boyle) may have been based on Boris Johnson, with former Labour Party spokesperson Alastair Campbell chiming in on the conversation.

On Sunday evening, the highly-anticipated series six finale of Line of Duty aired, revealing Buckells to be the corrupt police officer otherwise known as ‘H’ and referred to by AC-12 boss Superintendent Ted Hastings (Adrian Dunbar) as ‘The Fourth Man’.

Numerous viewers were left feeling underwhelmed by the big reveal, as Buckells – who was believed to simply be incompetent at his job – confessed to collaborating with the Organised Crime Group (OCG).

After watching the final episode, some viewers tweeted their belief that Line of Duty creator Jed Mercurio may have taken inspiration from Mr Johnson for Buckells, with several of the posts being retweeted by World Productions, the company that makes the crime drama.

One of the tweets included a transcript for the final speech made by Hastings in the episode, with ‘Ian Buckells’ crossed out and replaced by ‘Johnson’ and ‘officer’ replaced by ‘politician’ in a sentence that originally read: ‘Ian Buckells was an incompetent officer.’ 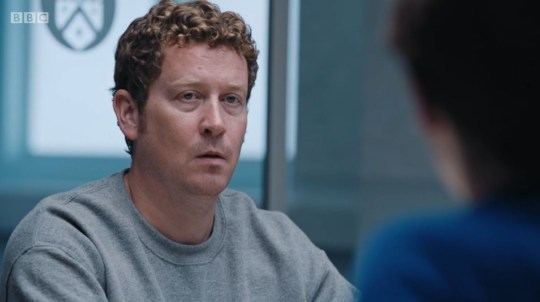 Many fans were left disappointed by Buckells’ reveal as ‘H’ (Picture: BBC) 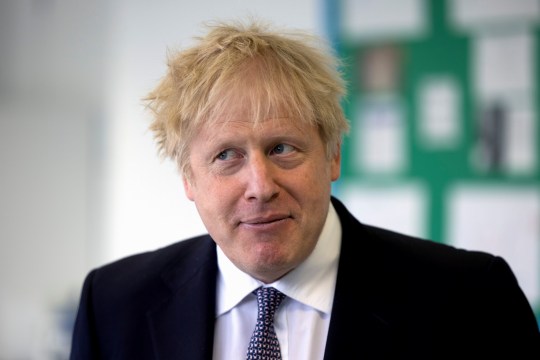 Some viewers believe Boris Johnson could have inspired the character (Picture: Dan Kitwood/Pool via Reuters)

‘I wonder if the reason so many people are angry, is because they don’t want to acknowledge that this guy is basically Buckells?’ one person tweeted with regards to the reaction to the series six finale.

‘Incompetent men being promoted to a level of power and corruption…. hmm sounds familiar @BorisJohnson,’ someone else wrote.

Another Twitter user shared a picture of Buckells alongside a picture of the prime minister with his hand over his mouth, writing the quote: ‘Your corruption has been mistaken for incompetence.’

‘”I just pass things on.” Big Boris vibes tonight from @jed_mercurio,’ someone else remarked.

Alastair, who was recently announced as the new guest presenter on Good Morning Britain following Piers Morgan’s exit, also tweeted: ‘“How some people can fail upwards beggars belief” – the best @jed_mercurio troll of @BorisJohnson yet #LineOfDuty.’

On Monday, Nigel addressed the disappointed fans during an appearance on BBC Breakfast, describing the avid followers of the TV show as ‘brilliant’.

‘There’s always going to be some element of disappointment. You can’t have every series with a big shoot out and “urgent exit required”. Sometimes a subtler message is more important,’ he said.

Creator Jed said in a tweet that he knew the final instalment ‘wouldn’t appeal to everyone’.

‘We’re honoured and flattered by the viewing figures for #LineofDuty6. We knew attempting to explore the real nature of corruption in our society wouldn’t appeal to everyone, but we do sincerely thank you all for watching,’ he wrote.

‘It’s been our privilege to share your Sunday nights.’

The BBC is yet to confirm if Line of Duty will return for a seventh series.

Metro.co.uk has contacted the BBC, World Productions and Jed Mercurio’s representatives for comment.

Line of Duty is available to watch on BBC iPlayer.