Lindemann’s Live In Moscow concert film is coming to cinemas for one night only – check out the trailer below.

Last November, the duo announced they had parted ways and would be “pursuing their own plans in the future”. They said at the time that a “final joint release” of last year’s Moscow show would be arriving on DVD this spring.

It has now been confirmed that the blistering arena gig will be hitting the big screens around the globe on Thursday, May 20 via Trafalgar Releasing.

Although the film is being screened for just one night in selected countries, a press release states that fans in Germany and Austria will be able to catch the show throughout the summer. Tickets go on sale next Thursday (May 13) – get them here. 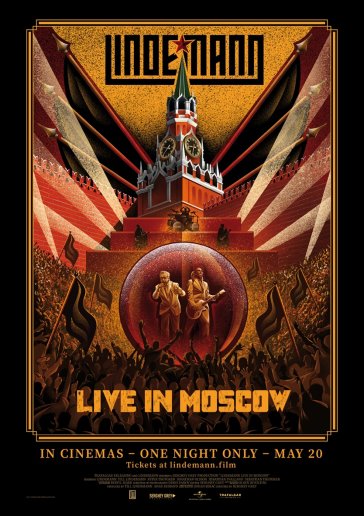 “Since Till Lindemann and Peter Tägtgren agreed in November 2020 not to continue Lindemann together and to dedicate themselves to other projects, Live in Moscow is a memorial to the special combination of two exceptional musicians that, over the space of just two albums, have created their own, unique musical coordinate system,” a statement reads.

Fans will also be able to own the concert on vinyl, CD, DVD and Blu-ray editions from May 21 (pre-order here) as well as new merchandise.

Lindemann’s Moscow performance has been described as “probably one of the very last concerts of the old era, the big party before the worldwide shutdown”, in reference to the coronavirus bringing live music to a halt.

Marc Allenby, CEO of Trafalgar Releasing, said: “As cinemas begin re-opening across the globe, we are proud to be bringing this audacious concert to audiences on the big screen, and are excited to partner on a solo project from the band following our successful release of Rammstein: Paris in 2017.”

Till Lindemann will continue to work under the Lindemann moniker, with last year’s statement promising “a new set up in the future”.