The right time for everything. Lily James finally addressed her PDA scandal with Dominic West, but she isn’t quite ready to divulge all the details.

“Ach, I’m not really willing to talk about that,” the Mamma Mia! Here We Go Again actress, 32, told The Guardian on Sunday, May 2. “There is a lot to say, but not now, I’m afraid.”

The Downton Abbey alum was caught kissing West, 51, who is married to Catherine FitzGerald, while in Rome in October 2020. In photos published by the Daily Mail, West stroked the actress’ hair and they rode around the Piazza di Pietra and Spanish Steps on an electric scooter. The Wire actor was not wearing his wedding ring in the images. 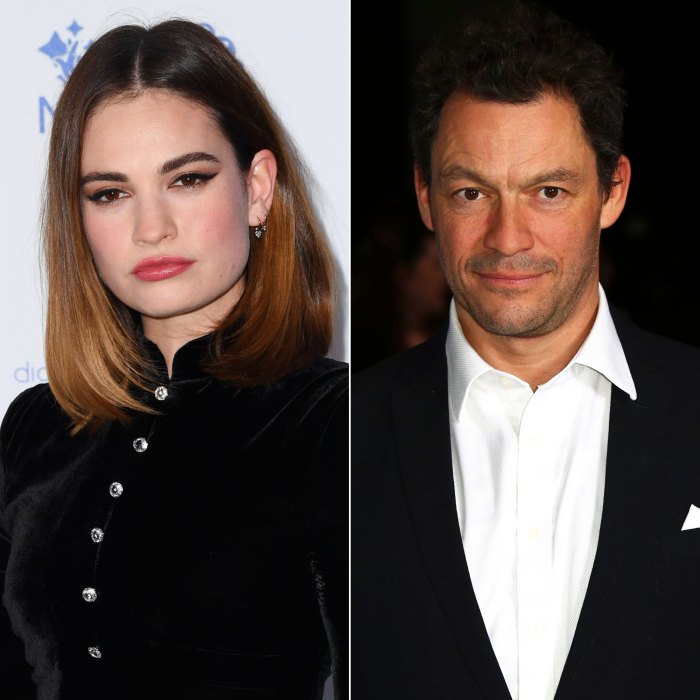 The newspaper also reported the pair spent two nights at the five-star Hotel de la Ville. A week after the initial photos were released, more snaps — which showed the Pursuit of Love costars hanging out with their arms wrapped around each other — were published. The duo also reportedly cuddled and kissed on the plane ride home to the U.K.

The pair — who play father and daughter in the upcoming BBC series — were flirty on set, a source told Us Weekly exclusively at the time.

“Dominic didn’t seem to be trying to hide the fact that he was attracted to her,” the insider said. “The way Dominic was carrying on with Lily people assumed that he was allowed to stray from his marriage.”

A day after the initial photos were released, West and FitzGerald, 49, shared that they were still very much together by kissing and posing for photographers outside their Wiltshire, England, home. They also handed a note to reporters that read, “Our marriage is strong and we’re very much still together. Thank you.”

Following the incident, a second source told Us exclusively that the landscape designer and James “were both horrified” by the photos.

“Dominic and his wife wanted to put up a united front,” the insider added in regard to the couple’s public appearance. “[The situation] strained Lily and Dominic’s working and personal relationship too.”

The War & Peace actress, who was rumored to be dating Chris Evans prior to the news, cancelled her upcoming press appearances in the wake of the photos’ release — even though she was set to promote her new film, Rebecca.

Less than a month after the scandal, she dined out with her Mamma Mia! costar Dominic Cooper in November 2020. In February, she was spotted kissing Queens of the Stone Age bassist Michael Schuman.