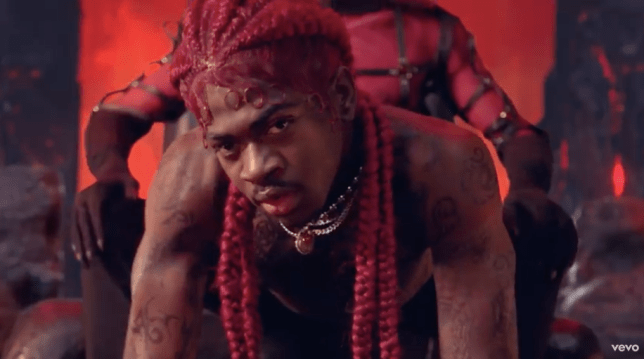 Lil Nas X has made a statement in his new video (Picture: YouTube)

Lil Nas X is ‘pushing an agenda to make people stay the f*** out of other people’s lives’.

The rapper has dropped his long-awaited song Montero (Call Me By Your Name), and it comes with his most unapologetically queer video to date.

The video for Montero opens with a voiceover saying: ‘In life, we hide the parts of ourselves we don’t want the world to see. We lock them away. We tell them no. We banish them. But here, we don’t. Welcome to Montero.’

We then see the 21-year-old pole-dancing in hell, being shackled by captors in Regency-era wigs and giving the devil a lapdance – all while looking incredible in a series of candy-coloured wigs and skintight costumes.

Being unapologetically queer in a rap video was always going to cause controversy, but Lil Nas X addressed his reasons for living his truth in a note to his 14-year-old self.

‘You see this is very scary for me, people will be angry, they will say I’m pushing an agenda. But the truth is, I am. The agenda to make people stay the f*** out of people’s lives and stop dictating who they should be.

‘Sending you love from the future.’

Fans and colleagues praised Lil Nas X’s epic video, while a comment from the official MTV account read: ‘you are paving a path for so many people, and I’m so proud of you.’

Over on Twitter, the rapper – real name Montero Hill – shared memes about the video, and gave a brilliant clapback to someone questioning the morality of the video.

In response to a tweet reading: ‘Basically he is riding the Devil explain how this visualization is supposed to be interpreted by the youth ? Should all men dress androgynously and sleep with satin [sic]?’, Lil Nas X simply responded: ‘Yes.’

The Grammy award winner shot to fame in 2019 with his track Old Town Road, which found success on TikTok before the remix with Billy Ray Cyrus spent 19 weeks at number one on the Billboard Hot 100 chart.

In June 2019, while at number one, Lil Nas X came out publicly as gay, later joking that he thought he ‘made it obvious’.

The star has been praised for coming out and being a role model to young people, although has also been hit with a lot of backlash from the hip-hop community, which has drawn attention to homophobia in the culture.

Speaking to the Guardian about his sexuality, Lil Nas X said: ‘The honest truth is, I planned to die with the secret. But that changed when I became Lil Nas X.

While he came out to his family before coming out publicly, the Holiday star said that it is ‘not something that’s ever brought up’.