Liam Payne’s been changing his accents for a while, apparently (picture: ITV/REX)

Myles Stephenson has claimed Liam Payne put on a different accent while speaking to Rak-Su backstage at the X Factor.

The singer and I’m A Celebrity star, 30, claimed Liam, 28, would ‘change his voice’ depending on the situation.

Wolverhampton-born Liam had made headlines after an interview on Monday’s Good Morning Britain went viral due to his ‘bizarre’ accent, which was likened to Irish, American and even Dutch, as he spoke about Will Smith slapping Chris Rock at the Oscars.

However, it appears it’s not the first time Liam’s accent has deviated, as Myles told Capital Xtra’s Tea Time podcast hosts Will Njobvu & Yewande Biala that he’s witnessed it first-hand.

Myles explained: ‘He’s done that to me before. He changes his voice. When we were on X Factor, he was performing.

‘And after, we were walking past, he said “hello.” We [Rak-Su] don’t speak with much etiquette. He’s come up to us and said “yes bruv, what are you saying?”’

Myles and Rak-Su had won the 2017 series of the X Factor, with Liam performing live on one of the shows from their year.

Liam had weighed in after Will had slapped Chris on stage, following a joke about wife Jada Pinkett-Smith.

The comedian had likened her to GI Jane without allegedly knowing Jada’s hair loss was down to the medical condition alopecia, which angered Will into confronting him.

Will later apologised to Chris in a statement, acknowledging that his reaction was misjudged, having addressed it during his tearful speech after winning the best actor Oscar for his role in King Richard.

Liam said of the altercation during his interview: ‘I believe whatever he felt that he did, he had the right to do. I also felt there were three losers in one fight.

‘He didn’t know being Chris Rock, he didn’t wanna do what he had to being Will Smith, and she did nothing, being Jada. 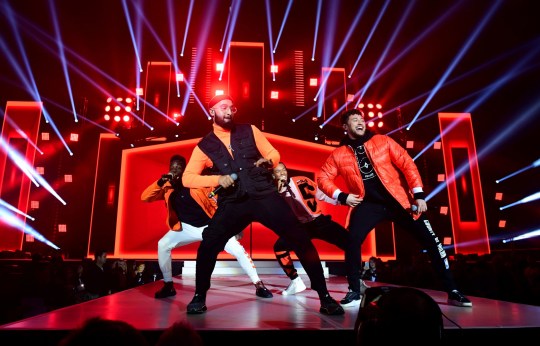 Liam changed his accent when he met Rak-Su (Picture: PA)

‘It was a powerful moment for me to sit and watch one of the world’s best emoters we’ve ever seen speak from the heart and I would rather take the beauty out of the situation than take the pain.

‘But I had to leave my chair, I’ll be honest with you, it cut me really deep and I don’t get deep about these things but I’m a big movie fan.

‘Out of a horrible moment there was a little bit of beauty in what came on and I’m sure everyone’s apologetic about what happened, shouldn’t happen.

‘But ask yourself what would you do in the situation, I don’t know how we would react, we’re all human.’