Dating pro! Miley Cyrus has had her fair share of love throughout her life, including many high-profile relationships.

The “Midnight Sky” singer’s dating life has been a popular topic throughout her career, beginning with her short-lived romances with Tyler Posey and Nick Jonas.

Her relationship with her Last Song costar Liam Hemsworth made headlines as the pair dated on and off for 10 years. They tied the knot in December 2018 after getting engaged in May 2012. The pair split for good in August 2019.

After a whirlwind rebound romance with Kaitlynn Carter and a relationship with Cody Simpson, Cyrus, who identifies as pansexual, got real about the highs and lows of her love life.

“I’ve been in love three times, but I’ve been in love more than I’ve loved anyone else one time,” she told host Alex Cooper on the “Call Her Daddy” podcast in August 2020. “I think that kind of sticks around … I don’t believe in one true love because there are qualities people bring to your life that someone else won’t.”

The Hannah Montana alum did not reveal who her three big loves were. She did, however, note that one of her past girlfriends has continued to pop up in her dreams.

“I’ve been in love [with] one person, who is a girl, who I still think about and dream about all the time,” she said. “But you just know that something doesn’t fit.”

Cyrus’ dating history has included both men and women, both before and after her divorce from Hemsworth. When it comes to what she wants in a partner, the “Wrecking Ball” singer is focused on someone in the same place as she is: sober.

“As of right now, having someone who is sober — like a partner — is very sexual to me,” she said in August 2020. “As someone who’s living the sober lifestyle, don’t find your next partner at the club, put yourself in places you’ll be successful, you can control the people who will flow into your life and I control who comes in and who doesn’t.”

Tyler Posey
The Disney Channel alum met the former Teen Wolf actor on the set of her dad’s show, Doc, in 2000, and started dating shortly after. “We were so damn young … I would get excited when we would hold hands,” Posey told ET of the relationship, which happened when she was 7 and he was 9. He also revealed that the “Malibu” singer was his first kiss.
Jim Smeal/BEI/Shutterstock; Matt Baron/BEI/Shutterstock 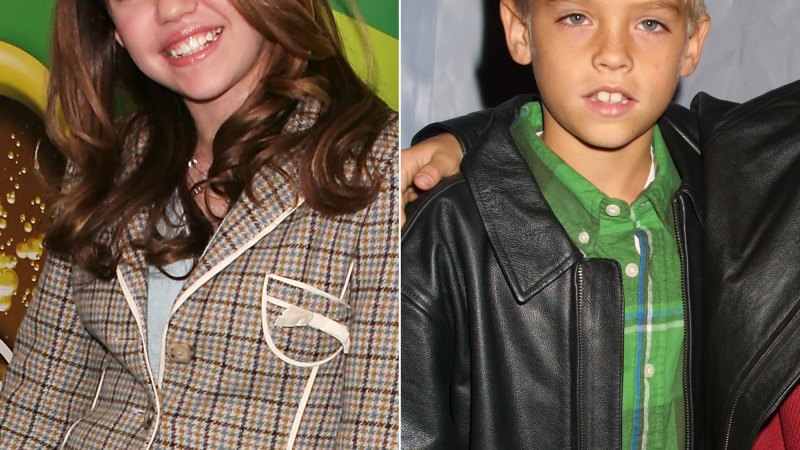 Dylan Sprouse
The Suite Life of Zack & Cody star admitted he and Cyrus dated for about a day when he was 11 or 12 years old. “We met at her set, I believe, and we dated. And then Nick Jonas walked by and it was over,” he joked on Jimmy Kimmel Live! in 2008.
Eric Workum/Starpix/Shutterstock; Matt Baron/BEI/Shutterstock 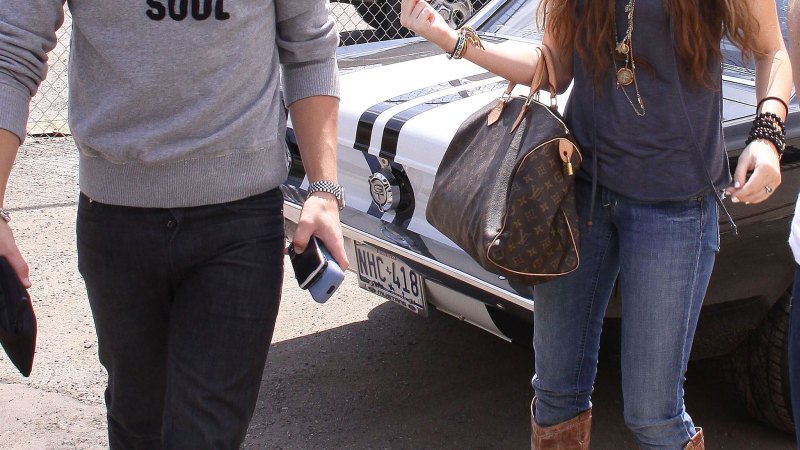 Nick Jonas
The “Jealous” and “Wrecking Ball” singers met in June 2006 when they were just 13 years old, before Jonas’ career with his famous brothers really took off. The pair dated throughout the Best of Both Worlds tour, which the Jonas Brothers served as the opening act, but called it quits in December 2007. “It seemed like my life was over, but everyone still living,” she said of the split in her book, Miles to Go. Cyrus proceeded to write “7 Things” about Jonas, whom she reconnected with years later to create the JoBros’ song “Before the Storm.”
Mcp/Shutterstock 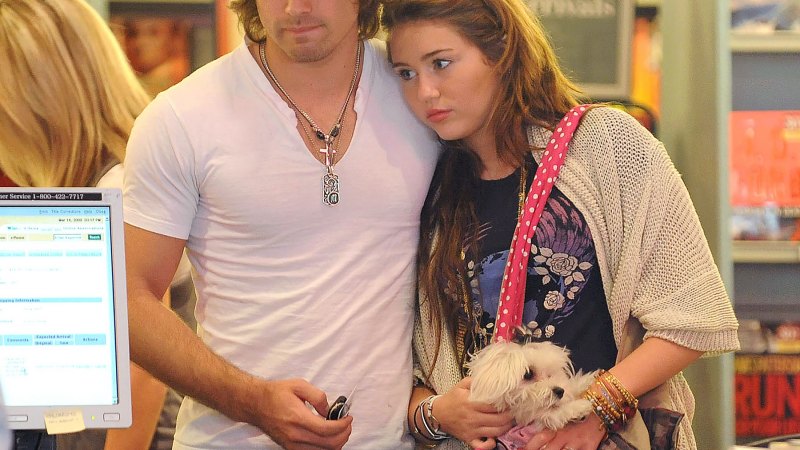 Justin Gaston
Shortly after the Nashville native split from Jonas, she struck up a relationship with Gaston, a former constant on her dad’s reality show, Nashville Star. The pair were solid despite their five-year age gap, but they decided to go their separate ways after nine months of dating when Cyrus left to go film The Last Song in Georgia.
Mcp/Shutterstock 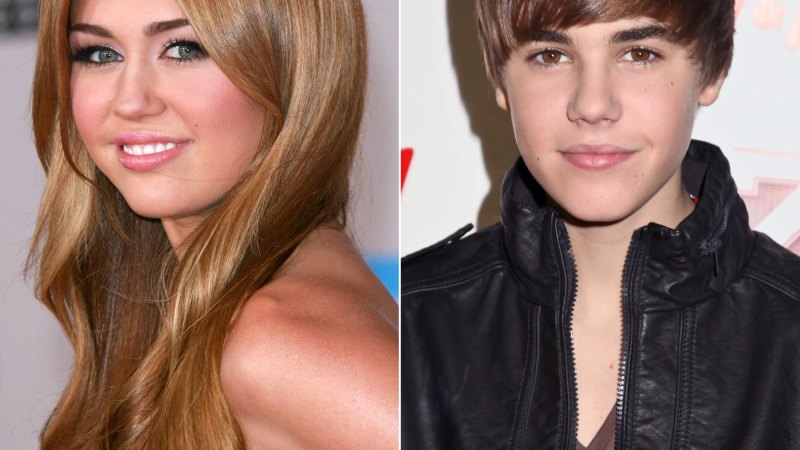 Justin Bieber
Fans freaked out when Cyrus went out to dinner with the “Sorry” crooner in May 2010. While many people assumed they were dating, Bieber admitted the “Nothing Breaks Like a Heart” singer was “not [his] type” and Cyrus added that they were together to discuss “a side project.”
Jim Smeal/BEI/Shutterstock; Gregory Pace/BEI/Shutterstock 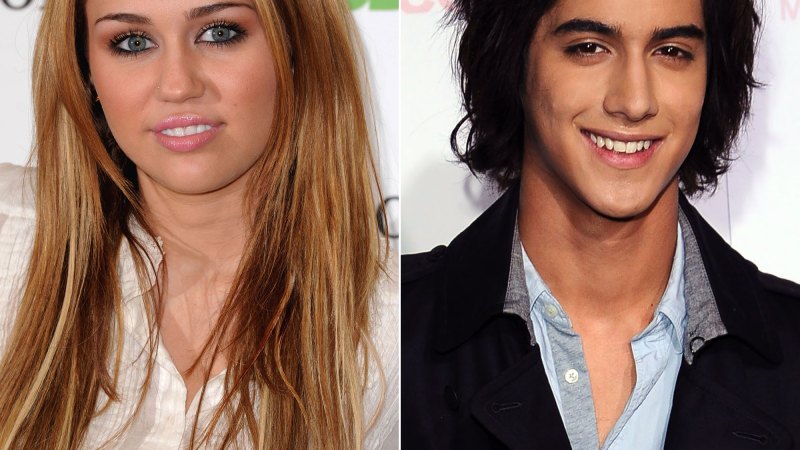 Avan Jogia
The former Disney and Nickelodeon stars sparked romance rumors when they were spotted making out at her birthday party in November 2010. Jogia was photographed kissing Cyrus’ neck as she leaned against a counter at the Trousdale nightclub in Los Angeles, a few days before she turned 18.
David Fisher/Shutterstock; Jim Smeal/BEI/Shutterstock 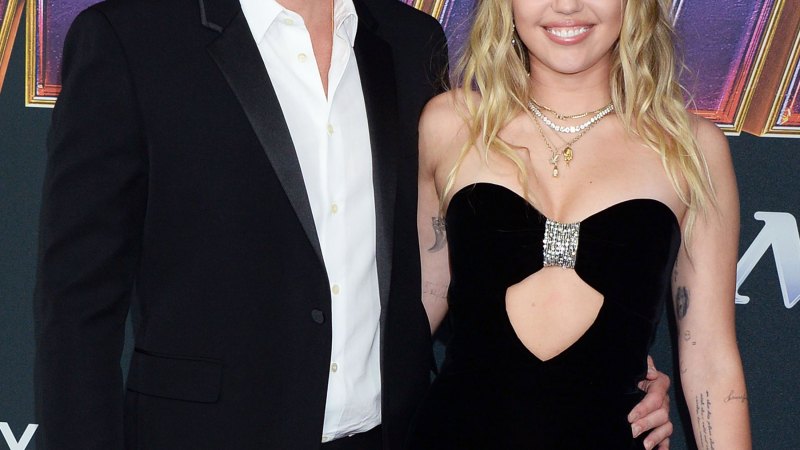 Liam Hemsworth
Cyrus and Hemsworth dated on and off for years after meeting on set of the 2010 Nicholas Sparks movie The Last Song, where they played Ronnie and Will, the lead roles, respectively. The Australian actor popped the question in May 2012, but the couple split in September 2013. Two years later, they were spotted hanging out once again and the former Disney star put her engagement ring back on shortly after. They got married in December 2018 after almost a decade of knowing each other. The duo shared the news of their separation in August 2019, and Hemsworth filed for divorce less than two weeks later.
Broadimage/Shutterstock 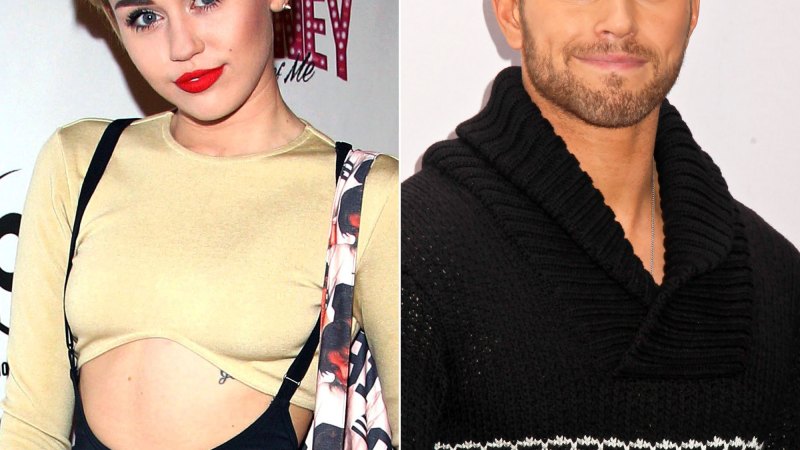 Kellan Lutz
Us Weekly broke the news in late December 2013 that the Twilight alum was hooking up with Cyrus, whom he met earlier that month. Lutz has been friends with Hemsworth for years, which added to Cyrus’ interest. “It doesn’t hurt that he’s Liam’s pal,” a source told Us at the time. “They really enjoy each other’s company.”
Nancy Rivera/Shutterstock; Gregory Pace/BEI/Shutterstock 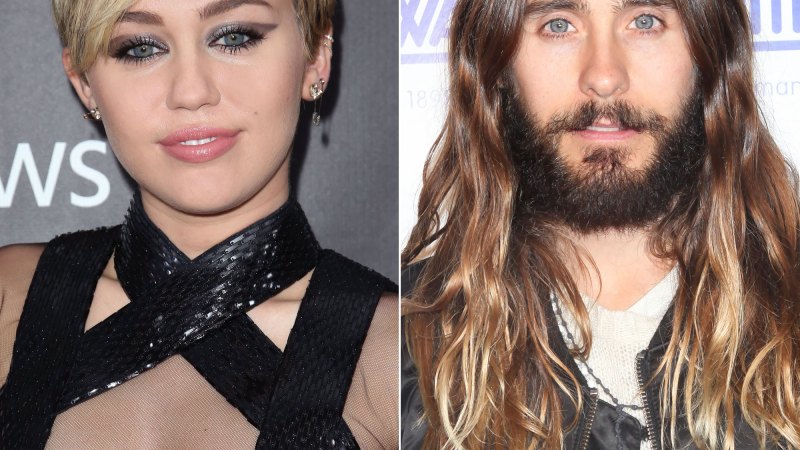 Jared Leto
“They like to have a good time, they love to talk about art and music — and they’re both comfortable with nudity!” a source told Us of Dallas Buyers Club actor and Last Song actress’ brief fling, which kicked off in February 2014. The insider added that the duo “[knew] each other for a while” before they began “hooking up,” but weren’t looking for anything serious to come out of the pairing.
Matt Baron/BEI/Shutterstock; Mediapunch/Shutterstock 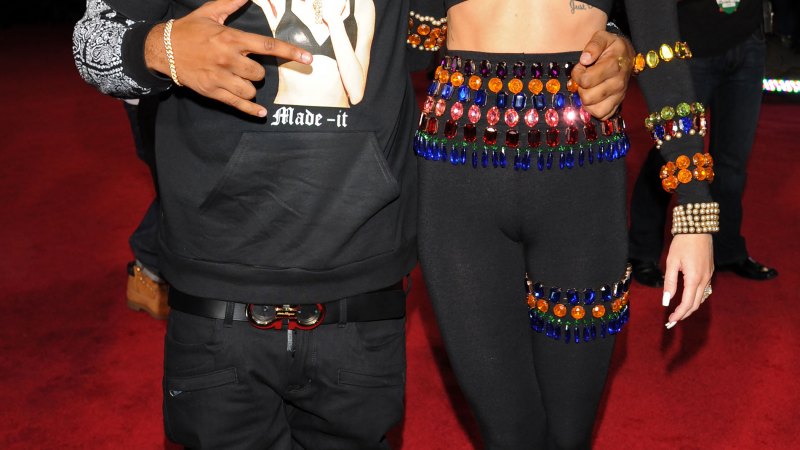 Mike WiLL Made-It
Us Weekly confirmed in June 2014 that Cyrus had been dating the Bangerz album producer since she and Hemsworth called off their engagement. “Everybody in her circle knows they’ve been together this whole time,” a source told Us at the time, adding that her mom, Tish Cyrus, loved him and felt like he was “part of the family.”
Scott Gries/Invision/AP/Shutterstock 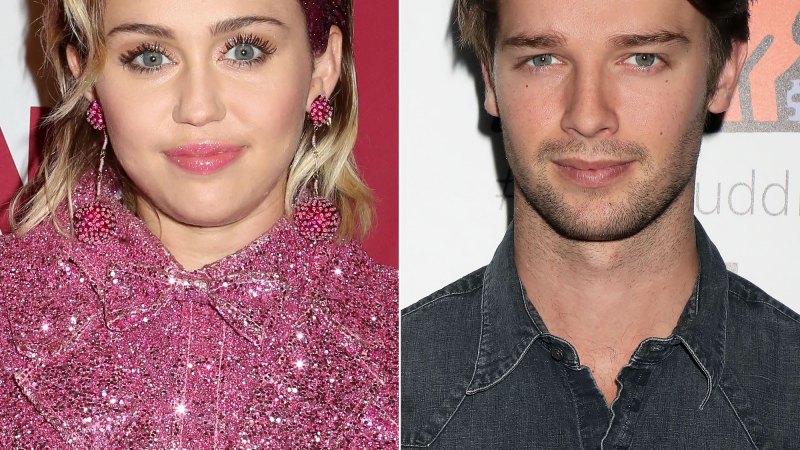 Patrick Schwarzenegger
Schwarzenegger told Details that his “eye [was] set on Miley” in 2011, and the pair started dating over three years later. Us Weekly confirmed that the pair had a brief fling during one of Cyrus’ breaks from Hemsworth, but they reconnected in 2014 and linked up for real. The Midnight Sun star was photographed doing body shots off a mystery girl in March 2015, which caused him and the So Undercover actress to call it quits. They attempted to reconcile, but ultimately split for good in April 2015 after five months together.
Greg Allen/Invision/AP/Shutterstock; Kcr/Shutterstock 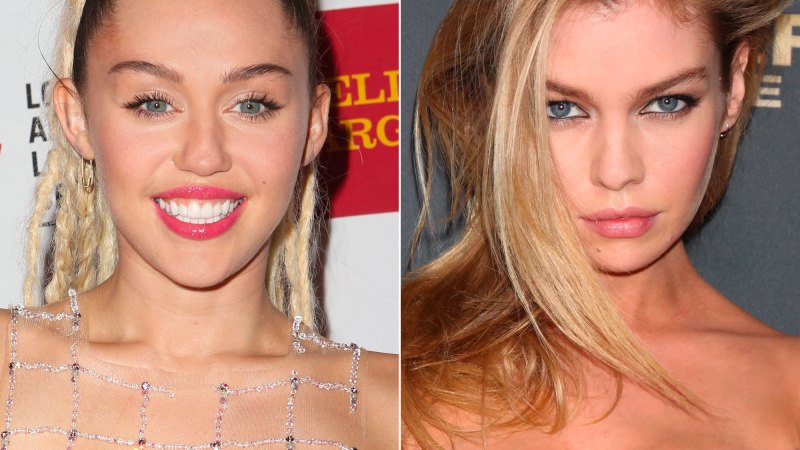 Stella Maxwell
Two months after her breakup with Schwarzenegger, Cyrus was seen kissing the Victoria’s Secret Angel on the set of a music video in Hollywood. The “We Can’t Stop” songstress opened up about her sexuality the month prior, telling Paper magazine, “I am literally open to every single thing that is consenting and doesn’t involve an animal and everyone is of age. Everything that’s legal, I’m down with. Yo, I’m down with any adult — anyone over the age of 18 who is down to love me.”
Mediapunch/Shutterstock; Gregory Pace/Shutterstock 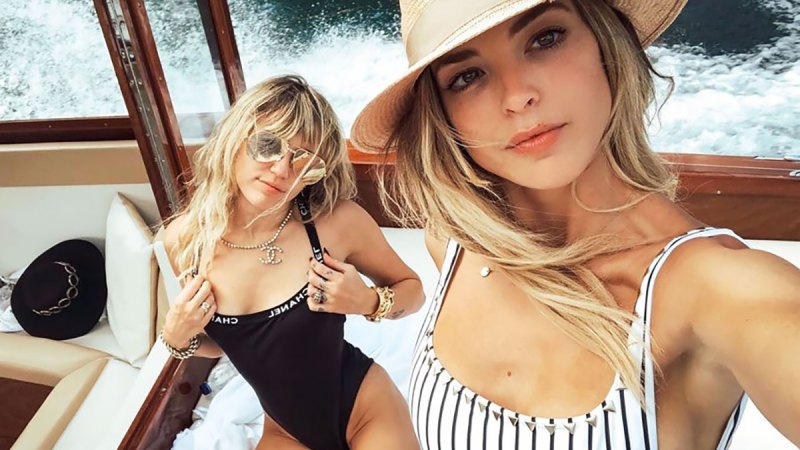 Kaitlynn Carter
Cyrus was seen kissing the blogger, who had recently split from Brody Jenner, during a trip to Italy in August 2019, around the same time that she announced her breakup with Hemsworth. The women continued to show PDA after returning home to the U.S., but they called it quits a month later.
Courtesy of Kaitlynn Carter/Instagram 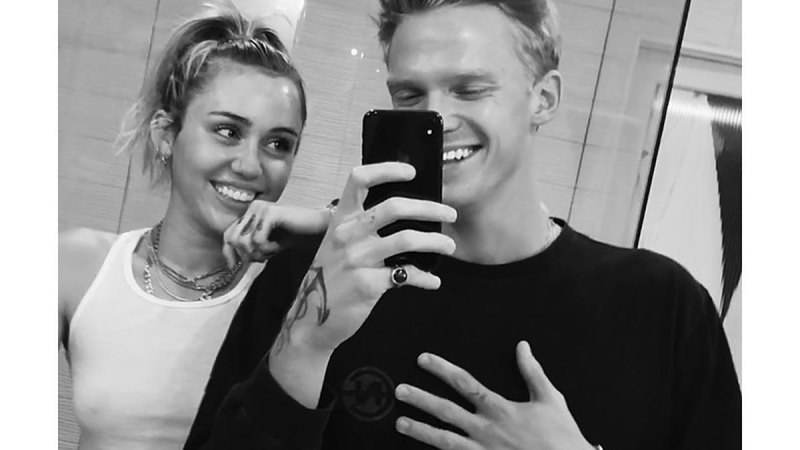 Cody Simpson
The longtime friends were spotted making out in Los Angeles in October 2019 after Cyrus’ splits from Hemsworth and Carter. The next day, the former Disney Channel star confirmed their romance on Instagram by uploading a shirtless photo of Simpson with the caption, “22 [check] Australian (my type) [check] Abs [check].” She later tweeted, “Get used to me dating – this is where I am at !”
The “Surfboard” crooner told Us exclusively in October 2019 that the pair “found each other in a space where we’re not partying, working real hard and just like [to] keep things healthy.” Cyrus, meanwhile, shaded her previous exes by stating that she’s only “met one” person — being Simpson — who has a “d–k” but is “not a d–k.” Later that month, Simpson was inspired by his romance with Cyrus to pen the song “Golden Thing.” However, they later sparked split rumors after the pair stopped posting photos together across social media, which the “La Da Dee” artist shut down by sharing a pic of the Disney alum to his Instagram Story.
It was reported in August 2020 that the duo called it quits.
Courtesy of Cody Simpson/Instagram