Lawyers from Slater and Gordon and Redfern Legal Centre who are launching a class action investigation into potentially unlawful searches by New South Wales Police at Splendour in the Grass have detailed their investigation to NME, saying they aim to file proceedings by next year.

Yesterday (November 16) it was first reported by triple j’s Hack that RLC and S&G are encouraging anyone who believes they were unlawfully searched at the festival between 2016 and 2019 to confidentially join the class action. Those impacted by “serious breaches” are potentially entitled to tens of thousands of dollars in compensation, RLC and S&G said.

Speaking to NME at S&G’s Sydney office yesterday, RLC principal solicitor Alexis Goodstone said they hoped to file proceedings by the middle of 2022, urging affected festivalgoers to come forward and share their experiences before then.

In 2020, the Law Enforcement Conduct Commission concluded a two-year inquiry into NSW Police strip search practices. The watchdog then released a 150-page report that found there was “grey area” in the force’s protocol when it came to police searches.

As part of the LECC’s inquiry, it questioned a NSW police officer who admitted that the 19 searches he conducted at Splendour in 2018 may have been unlawful. The LECC also found that a 16-year-old girl was unlawfully searched at the festival in 2018.

This action, focused on Splendour, comes after RLC and S&G’s own 2020 investigation into NSW Police strip searches conducted over the past six years, Hack reported.

“The question of whether someone’s being subjected to an unlawful search or not is not determined by whether drugs that were found or not. So, people may well be eligible to be part of the class action and to obtain compensation even if drugs were found on them.”

They encourage festivalgoers to reach out even if they are unsure of whether they were searched unlawfully or not, S&G senior associate Ebony Birchall adds: “We just want to hear from everyone who was searched because we can work out if the search was unlawful or not on our end. It’s more about hearing from everyone.”

Goodstone says they hope the class actions proceedings also serve as an impetus for wider change. “We know that strip searches are harmful and degrading, and we know that in the vast majority of cases they don’t find anything,” she says.

“The high numbers of strip searches are, we think, undermining confidence in police in New South Wales. We think that there’s a real need for change, and we’re hoping that the class action will be a part of that movement for change.”

Punters at Splendour In The Grass 2019. Credit: Matt Jelonek/Wire Image

Yesterday, a spokesperson for NSW Police told NME that whether a search had been conducted lawfully was “ultimately a matter for the Court”.

“Police are required to suspect on reasonable grounds that the circumstances are serious and urgent when determining whether a strip search is necessary. When making that determination, police will consider all of the available information, including the risk of someone overdosing or dying.”

When presented with NSW Police’s comment, Goodstone said: “I’d be surprised to find that of all of the strip searches that have taken place at Splendour or at other music festivals were based on a reasonable suspicion that the person was at risk of serious harm because of ingesting drugs.” (NSW Police declined further comment.)

Goodstone says that they believe police had implemented strip searches at festivals like Splendour in the Grass in a “routine” fashion that did not meet the “high threshold” for what warrants such a search. She says that what both their investigations, as well as that of the LECC, have found is police don’t always understand or apply the law correctly.

“The law sets quite a strict test as to when it’s lawful for police to undertake [strip searches], and that is that police have to have a reasonable suspicion that you’ve got something on you that’s unlawful, like drugs, but also that the circumstances are serious and urgent, so as to make a strip search necessary,” she explained.

“We know from the Law Enforcement Conduct Commission that strip searches in the context of music festivals and targeting people really for possession of small quantities of drugs are not likely to meet that serious part of the test. 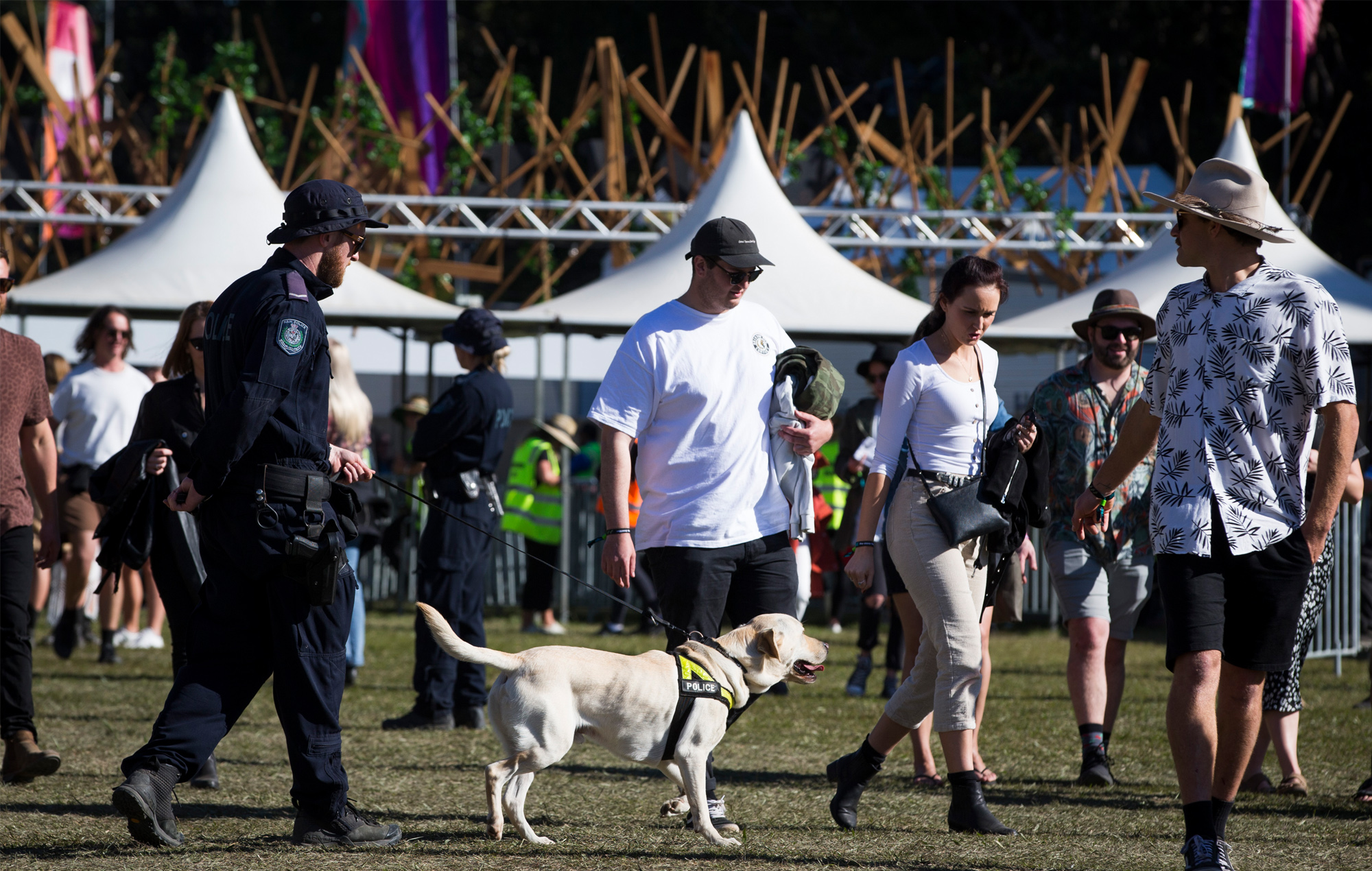 A police officer and drug detection dog at Splendour In The Grass 2019. Credit: Matt Jelonek/Wire Image

One of the people sharing their story as part of RLC and S&G’s investigation is Chad Helman, who attended Splendour in the Grass in 2016 aged 25. Helman told NME in an interview yesterday that as he was attempting to enter the festival site on its first day, he was grabbed on the shoulder by a police officer, who claimed a sniffer dog had sat down as he walked past.

Helman was asked if he had anything on him he shouldn’t have, and after saying he didn’t, was told he had “one more chance” to surrender any illegal items or he wouldn’t be able to enter the festival.

Helman was then taken into a demountable area and had his footwear, pockets, wallet and phone checked. All that turned up, he says, was an insulin pen he needs for his diabetes.

A male officer was instructed to come in, who told Helman to take off his pants and underwear, turn around, and “bend down and open up”. Helman says he felt “invaded” by the search, which he says he did not consent to. “There was no rights read out to me. None of that at all. I wasn’t asked for or give consent.”

Birchall says, “I think that it’s really important to say that actually, in that moment, he did have rights, because the law does protect people and say that these strip searches can only occur in certain circumstances.

“When the police do the wrong thing and break the law, that’s actually classified by law as an assault, which then gives right to compensation. Chad and other people who have been unlawfully searched do have rights. I think this class action is a really powerful way to let society know that, and shows the police that we’re watching their conduct, they will be held accountable, and that they can’t get away with doing the wrong thing.”

Splendour in the Grass co-founder Jessica Ducrou said in a statement yesterday that Splendour organisers had “no insight” into police search processes at their festivals.

“Splendour wishes to make clear that we had no insight into NSW Police search processes at our festivals,” Ducrou said in a comment included in the press release from RLC and S&G.

“We do not support drug dog operations as a method to manage a broader societal challenge that extends well beyond the context of a music festival. We support our patrons who wish to come forward to call out and help stop unlawful conduct.”

One of the findings of the LECC’s report last year was that Aboriginal and Torres Strait Islander people were disproportionately targeted in strip searches, accounting for between 17.1 to 19.5 per cent of all persons strip-searched, which Goodstone called a “horrendous” statistic.

“When the use of one of the most invasive police powers has a disproportionate impact on vulnerable people, including First Nations people, then we really need to have a good close look at it,” she said.

Goodstone says she hopes that this Splendour investigation can pave the way for other class or individual actions concerning potentially unlawful strip searches in other contexts. “We’re keen to use this as a testing ground, and to then use the findings of this case to expand our reach beyond just [Splendour] and beyond music festivals.”

A coronial inquest into deaths at music festivals back in 2019 made a number of recommendations for NSW Police, including some that addressed strip searches.

These included limiting strip searches to circumstances in which there is reasonable suspicion the person searched has or is planning to commit an offence of supplying prohibited drugs, that the search is necessary to prevent “immediate risk to personal safety”, and no less invasive alternative is appropriate.

The Australian Festivals Association, which participated in the inquest, maintains that “the implementation of the recommendations… remain an important step towards patron safety at festivals”, AFA managing director Julia Robinson said in a statement to NME.

“At the time of release we welcomed the coroner’s recommendations in full as they represented a robust investigation into all factors relating to the deaths, including any connection with strip search procedures,” Robinson said.

“The AFA maintains that the implementation of the recommendations provided to all parties as part of the inquest process, remain an important step towards patron safety at festivals.”