Making tough choices. Lamar Odom is sending love to former sister-in-law Kim Kardashian and her husband, Kanye West, amid ongoing rumors that they’re heading for a divorce after six years of marriage.

Odom, who was previously married to Khloé Kardashian from 2009 to 2016, added that he hasn’t been in touch with the 43-year-old rapper recently. The Yeezy designer was a big support system for Odom in the wake of his 2015 health scare and hospitalization.

“I haven’t been able to speak to him,” the retired athlete told Us. “I would love to though [after] what he did for me.” 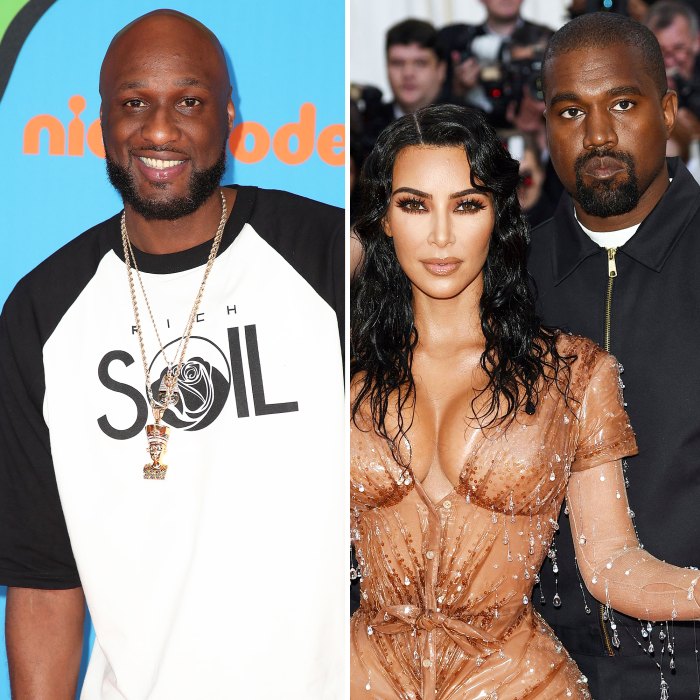 West and the KKW Beauty founder, 40, tied the knot in May 2014 and share four children: North, 7, Saint, 5, Chicago, 3, and Psalm, 21 months. Us previously reported in July 2020 that Kim was meeting with lawyers to discuss her options after the “Gold Digger” rapper’s emotional display at his presidential campaign rally in South Carolina and subsequent Twitter rants. At the time, a source explained that the reality star hesitated to follow through with the split “because of their children.”

In January, however, the twosome’s marital woes came to a breaking point after having “a big fight” during the holiday season. An insider revealed that the pair “have both been living separate lives for many months” and “haven’t been on the same page for a while now,” adding that the Skims CEO is “done” with West.

The couple attended marriage counseling earlier this year, but the Keeping Up With the Kardashians star was spotted without her wedding band on multiple occasions. Kim has also had famed divorce attorney Laura Wasser on retainer for months and has discussed her “exit plan” at length with financial advisors, according to insiders.

“Kim has had all of her and Kanye’s financials and properties ready to be split, it’s a very fair deal for everyone,” a source told Us exclusively in January. “Kim has all of her assets and financials ready for when she decides to file officially. Friends thought she was going to file in September, but she’s holding out. That does not mean that everything behind the scenes is already done.”

Odom isn’t the only one encouraging the duo to make the healthiest choice for themselves amid their ups and downs. The California native’s inner circle has her back as she continues to consider her next step.

“While they have a multitude of problems, friends on both sides think there is a chance this separation could give them a fresh start,” a separate insider revealed in January.

The former NBA star recently went through a public breakup of his own, splitting from fiancée Sabrina Parr one year after he proposed in November 2019. The pair briefly reunited for the Thanksgiving holiday but won’t be getting back together anytime soon.

“Maybe it was too much time together too soon for the both of us,” Odom told Us of his split. “We kind of just jumped into it. … . We didn’t give each other, the time to really know each other before we made some life-changing decisions.”