The Vanderpump Rules star, 31, seemingly commented on Emmett’s alleged cheating scandal by recreating an October 2021 photo of the producer, 51, walking with two women in Music City. (The incident ultimately played a part in the pair’s split that same month.)

“You rocked my world, Nashville. I loved staying at @graduatehotels,” Kent wrote via Instagram on Wednesday, May 11. “Three more shows left for the Give Them Lala Live tour! See y’all soon!”

Kent’s first snap showed the Bravo star — who shares 13-month-old daughter Ocean with Emmett — at the Graduate hotel in Nashville wearing a Give Them Lala Live tour T-shirt. 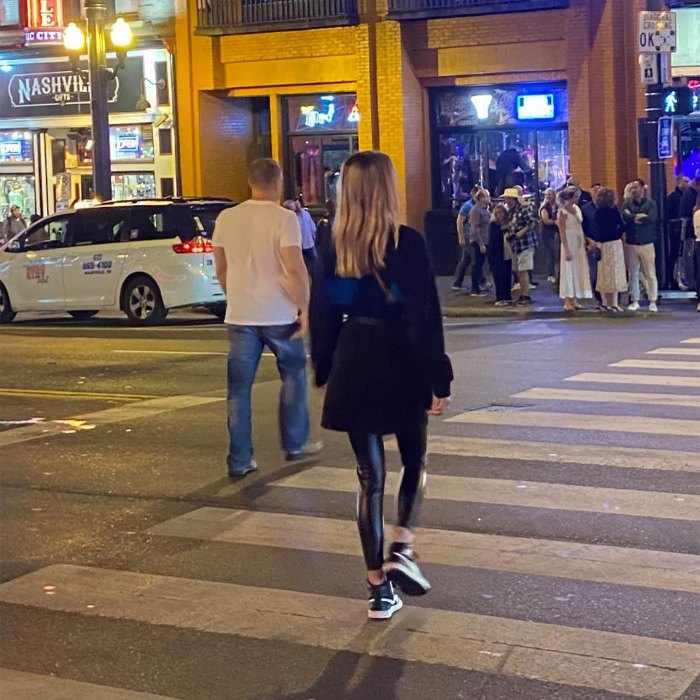 The second picture, however, raised eyebrows as it showed the Give Them Lala Beauty founder walking in a crosswalk wearing all black on Broadway Street headed toward Honkey Tonk Central.

Eagle-eyed fans were quick to see that Kent was replicating a photo that was previously shared by a social media user last year in front of the same bar. At the time, the fan claimed that Emmett was out in Nashville with two women who “were not Lala.”

“😂😂😂😂 second pic #savage,” one fan replied to Kent’s post on Wednesday, while another person wrote, “SECOND PICTURE I’M ON THE FLOOR.”

The “Give Them Lala” podcast host’s fans sang her praises for the scandalous recreation, with one writing, “🙌🔥 yes for the 2nd pic! Well played 👏.” A different follower added: “Iconic AF😂😂👏👏👏👏.”

The Utah native sparked split speculation in October 2021 after she “liked” a meme about Emmett allegedly cheating on her. Days later, Kent was seen without her engagement ring while out in Los Angeles.

Us Weekly confirmed in November 2021 that the pair called off their engagement after three years, with a source saying that “it was Lala’s decision” to end the romance. “The trust is gone,” the insider said at the time.

One month later, Kent commented on the 2021 Nashville cheating rumors, explaining that the incident led to her changing her tattoo about the Midnight in the Switchgrass director to something more empowering.

“I found out about the pictures of his name we shall not mention and the Nashville girls,” she explained during a December 2021 episode of her podcast. “[And] I decided on October 20th, the day of my book signing, that I was going to change my tattoo from [‘Rand’] to ‘bRand new.’”

Kent didn’t directly talk about her ex’s alleged affair during the episode, but she did note that she “got the f—k out” of the relationship after she “felt unsafe” with Emmett.

The filmmaker, who shares daughters London, 12, and Rylee, 8, with ex-wife Ambyr Childers, addressed the infidelity claims during a March appearance on the “Genuinely GG” podcast. At the time, Emmett said he would “never” comment “on any of that stuff.”

The Gotti producer added: “There’s always two sides to every story. But I am just not going to ever take that to the public. I can’t get involved in that — it is never going to be who I am.”