Lady Gaga did the absolute most to prepare for her role as Patrizia Reggiani in House of Gucci, making sure she gave the part her all.

Fans will know all about how the 35-year-old spoke with an accent for months in a bid to get her portrayal of the real-life ex-wife of Maurizio Gucci as accurate as possible.

In a new featurette ahead of the DVD release on February 21, obtained by Metro.co.uk, the Bad Romance singer lifted the lid on the other lengths she went to behind the scenes.

‘My character, Patrizia Reggiani, was a woman in a man’s world. She was smart and she wanted so much to be taken seriously,’ she said in the clip.

‘When I was researching Patrizia, I read anything that I could find that didn’t have too much of an opinion.

‘I walked all around Italy, I’d have my mask on and no one knew who I was, and I would say, “What do you know about Patrizia Gucci?’

Lady Gaga really went all out for her House of Gucci part (Picture: Universal)

Side note: Imagine realising months later that the woman who questioned you in Italy was Gaga herself?!

Director Ridley Scott also took a moment to heap praise on the star, telling the camera: ‘I started being very curious when I saw A Star Is Born and I thought, “This is a real engine of creativity”.’

‘She just threw herself into this part and captured the essence of this character.’ 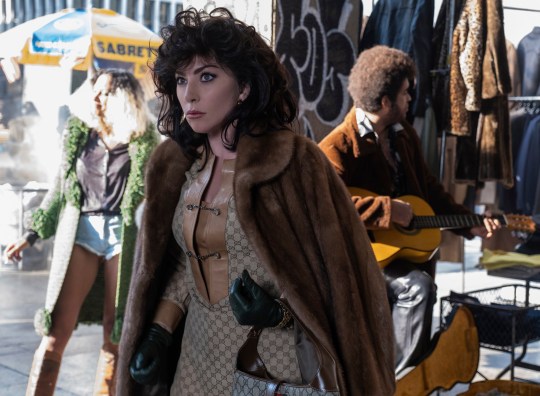 Gaga underwent a transformation for the role (Picture: MGM)

Gaga – real name Stefani Germanotta – raised eyebrows when she was first announced to be appearing in the fashionable flick, alongside Adam Driver, Salma Hayek, Jared Leto and Al Pacino.

Discussing her preparations to play Patrizia in a candid chat with Vogue last year, she confessed that she actually had trouble snapping out of the role.

‘I remember I went out into Italy one day with a hat on to take a walk. I hadn’t taken a walk in about two months and I panicked. I thought I was on a movie set.’

‘It is three years since I started working on it and I will be fully honest and transparent: I lived as her Reggiani for a year and a half,’ she added.

‘And I spoke with an accent for nine months of that. Off camera, I never broke. I stayed with her. It was nearly impossible for me to speak in the accent as a blonde.

Gaga has been tipped for success in the best actress categories at the upcoming Baftas and SAG Awards for House of Gucci.

House of Gucci is available on Blu-ray and DVD from February 21.