Kylie Jenner and Travis Scott arrive at the 2022 Billboard Music Awards held at the MGM Grand Garden Arena on May 15, 2022 in Las Vegas.
Image Press Agency/NurPhoto/Shutterstock

Expecting baby no. 3? Kylie Jenner’s recent comment on her beau Travis Scott’s photo left fans wondering if another Kar-Jenner pregnancy announcement was on the horizon.

The Kardashians star, 24, complimented her longtime boyfriend, 31, on Sunday, July 24 after he shared a photo of himself via Instagram in New York City. “Got there in a New York minute,” the “Anecdote” rapper captioned his post, to which Jenner commented, “😛🤰🏻🤰🏻🤰🏻🤰🏻.”

The Kylie Cosmetics founder — who shares daughter Stormi, 4, and a 5-month-old son (whose name has yet to be revealed) with the Texas native — confused fans with the emoji move, as many wondered if she was announcing a third pregnancy.

“OMG??” questioned one social media user while another wrote, “3rd baby is coming.” More followers questioned the reality star about her possibly being pregnant while others pushed her to release the name of her second child before welcoming another. 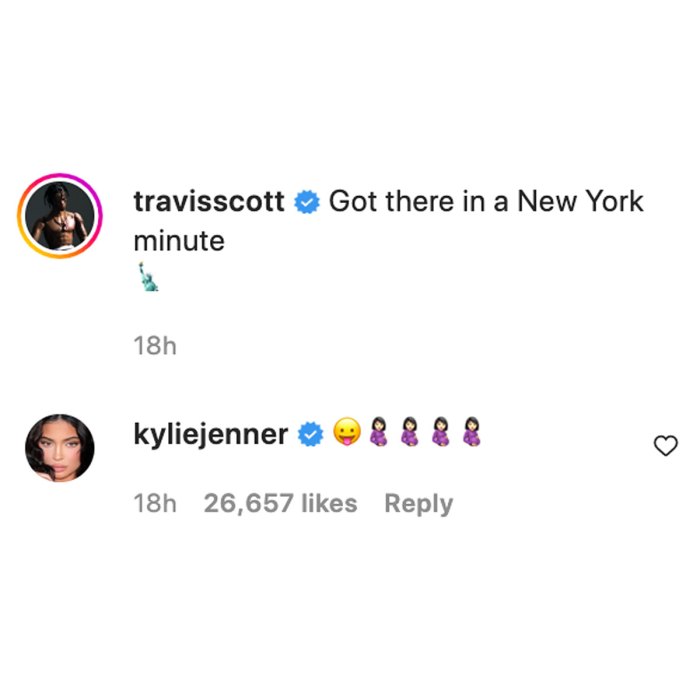 This isn’t the first time the couple sent the internet into a frenzy. Just last week, followers of the couple began speculating they were engaged after the Keeping Up With the Kardashians alum was spotted arriving at the Los Angeles celeb hot spot Giorgio Baldi on Wednesday, July 21, wearing an all-white look.

Jenner was joined by her sisters Kim Kardashian and Khloé Kardashian and friends Stassie Karanikolaou and Yris Palmer, who all opted for black outfits for the night out, causing fans to believe they were celebrating the Kylie Skin founder’s bridal shower.

Moreover, fans of Jenner and Scott discovered a wedding registry on the site Scully & Scully credited to Cactus Jack — which is the name of Scott’s record label — and Mother Goose, with December 10 as the listed wedding date. (The names and date on the registry have since been changed.) The couple in question registered for items like a $15,000 Baccarat crystal chess set and a $36,000 Daum Crystal sculpture — luxury items that seemed plausible for the billionaire makeup mogul to request.

According to Page Six, however, the registry doesn’t belong to the couple. Although they’ve been dating since April 2017 (with a brief split in between), they don’t have any plans to marry any time soon.

“I’m not thinking about marriage right now, but I would hope to get married one day,” Jenner told host Andy Cohen during the KUWTK reunion special which aired in June 2021.

Scott also shared his thoughts on tying the knot with Rolling Stone in December 2018. “We’ll get married soon. I just gotta sturdy up — I gotta propose in a fire way,” the “Highest in the Room” rapper shared with the outlet. “[At first,] we was just two kids, f—king around. Maybe, like, the first week, you don’t know if it’s real or a fling. Then the second week you’re like, ‘Whoa, I’m still talking to her, she’s responding, I’m responding. We ain’t run out of a thing to say. And it got to a point where I was like, ‘I need her with me to operate. She’s that one.’”