Headed down the aisle? Kourtney Kardashian and Travis Barker’s pals think it’s only a matter of time before the couple tie the knot, a source exclusively tells Us Weekly.

“Kourtney and Travis are so happy together,” the insider says. “And friends think they absolutely will be getting engaged sooner rather than later.”

The pair, who were first linked in 2020, have been traveling together for months and showing PDA wherever they go. Their most recent trip was jetting off to Utah following Kardashian’s birthday earlier this month. 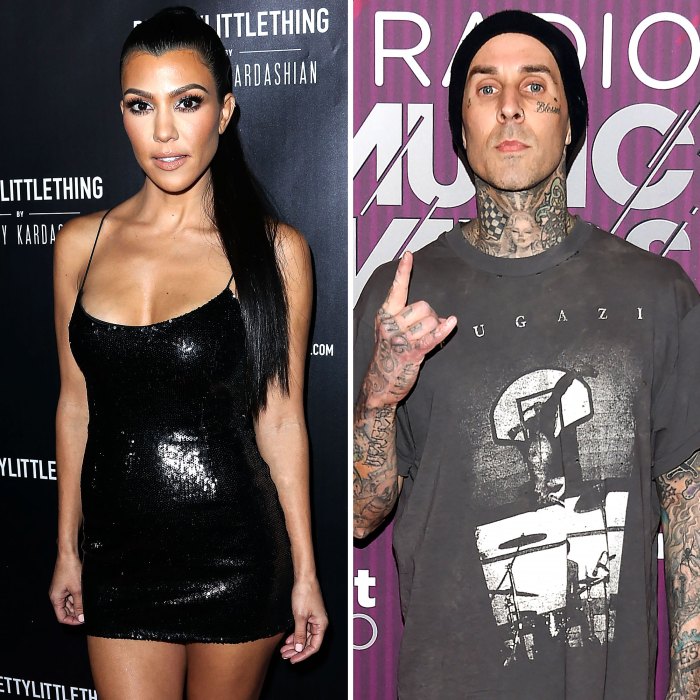 “They love getting out of L.A. and being with their families in the Utah environment,” the source adds.

Us confirmed in January that the Keeping Up With the Kardashians star and the Blink-182 drummer are “officially a couple” and “have been dating for a couple of months” after being close friends for years. “Travis is very smitten with Kourtney and has been for a while,” the source told Us at the time.

The duo made their relationship Instagram official in February after celebrating their first Valentine’s Day as a couple. The following month, the lovebirds attended the UFC 260: Miocic vs. Ngannou 2 event live in Nevada alongside Megan Fox and Machine Gun Kelly.

Barker showed his girlfriend how much she means to him by sending her a giant floral display on her birthday in April before taking her out for a romantic dinner.

“I F—KING LOVE YOU! YOU’RE A BLESSING TO THIS WORLD,” he captioned a series of PDA-filled photos in honor of the Poosh founder’s big day. “HAPPY BIRTHDAY.”

A source later told Us that Kardashian gave Barker “permission” to post the sexy photos of them on her birthday, noting that the drummer’s post was “just him wanting to let everyone in the world know how crazy he is about her.”

The insider explained that as a couple, they’re “always showing PDA” and their chemistry is “off the charts.”

Although the reality TV star and the musician have been dating less than a year, their romance is the real deal.

“Their relationship has gotten more serious over the past two months,” the source said. “They love each other very much.”

The TV personality dated Disick, 37, on and off for nine years before calling it quits in July 2015. She later dated Younes Bendjima from October 2016 to August 2018.

The Meet the Barkers alum, for his part, filed for divorce from Moakler, 46, in August 2006 after nearly two years of marriage. The pair briefly reconciled but split for good in April 2009. He was then linked to Arianny Celeste and Rita Ora.