The couple that overshares together, stays together. Kourtney Kardashian gave fans a glimpse of her intimate date night with boyfriend Travis Barker — and the pics prove their romance won’t be cooling off anytime soon.

One close-up snap showed Barker, 45, with his arms wrapped around the reality star’s rear end as she straddled his lap. Kardashian pulled the drummer in for a big kiss. A second photo showed the same steamy moment from a different angle.

“My baby❤️‍🔥,” the Blink-182 musician responded, while Khloé Kardashian left a series of sweating emojis in the comments section.

Kourtney’s close pal Simon Huck even joked that the pose was her “signature move.”

Us Weekly confirmed in January that the couple had taken their relationship out of the friend zone after Barker was spotted spending time at Kris Jenner’s home in Palm Springs, California. “They have been close friends for years and have been dating for a couple months,” a source said at the time. “Travis is very smitten with Kourtney and has been for a while.”

Since going public with their romance, the twosome haven’t shied away from sharing their affection — even if it comes across as NSFW. In April, Barker made a suggestive remark on social media, teasing, “Dogs never bite me. Just humans.”

At the time, Kourtney left little to the imagination, replying with a vampire emoji. 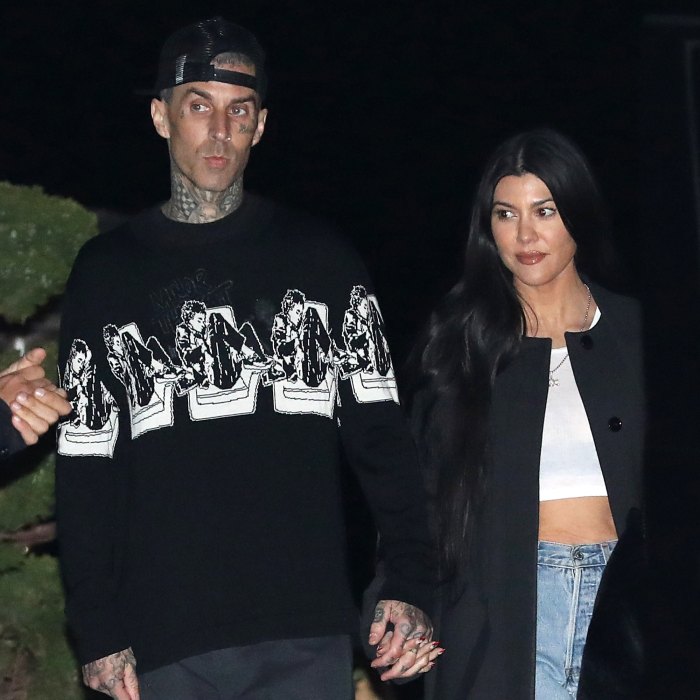 The couple’s connection has only continued to grow deeper and the Keeping Up With the Kardashians alum’s family members are fully onboard. “Isn’t it great?” Jenner, 65, gushed over her eldest daughter’s romance during an interview with Ryan Seacrest earlier this month. “It’s the best.”

With the way their relationship is progressing, Kourtney and the “All the Small Things” rocker might be taking the next step sooner rather than later.

“An engagement could be right around the corner for Kourtney and Travis,” a source revealed on Wednesday, June 16. “The engagement would be very over the top since Travis loves impressing her.”

The potential proposal might take place “at their favorite place in the world, Disneyland, in front of the kids and family,” the insider added.