The Keeping Up With the Kardashians star’s new pad is a six-bedroom home in the California desert costing more than $10 million, the insider adds.

The 42-year-old TV personality gave fans a glimpse at her new house over Memorial Day weekend while celebrating the holiday with boyfriend Travis Barker and her three kids, Mason, 11, Penelope, 8, and Reign, 6, whom she shares with ex-boyfriend Scott Disick.

“Happy weekend,” Kardashian captioned a series of photos via Instagram on Monday, May 31.

The Poosh founder wore a floral bikini and black sunglasses in one snap, which revealed the wood covered exterior of the outdoor living space. She also posted a photo of her view of the mountains from the pool in the backyard, which is lined with palm trees. 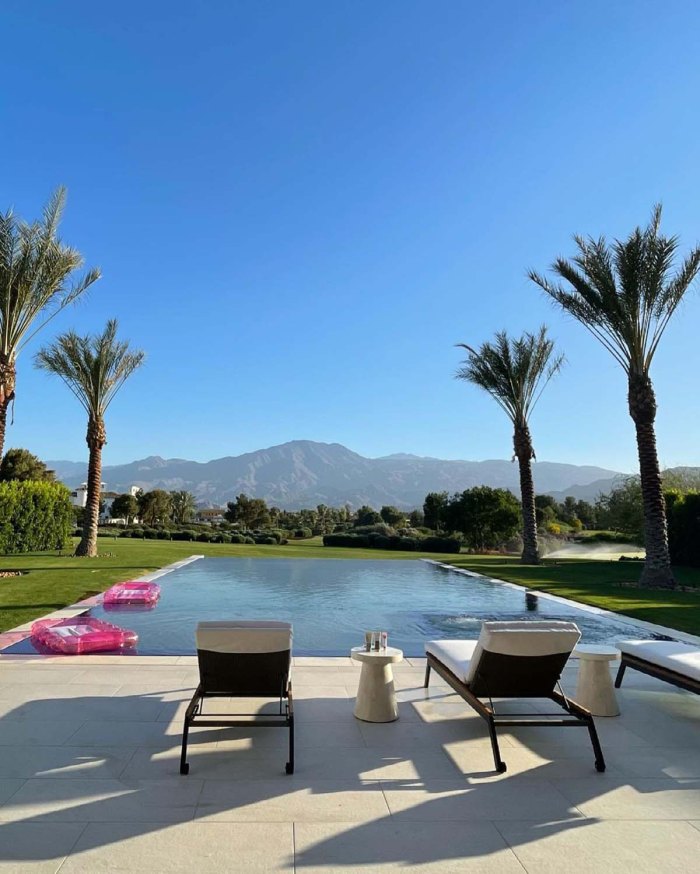 The home appears to be located near a golf course, based on multiple videos Kardashian shared of Reign rolling on the green. Barker, 45, was also spotted playing around on the grass with the little one.

The mother of three, who has been dating the drummer since late 2020, posted videos of her beau going down a giant waterslide near the vacation home alongside Penelope and Reign.

Kardashian channeled her inner child during the holiday weekend, sliding down the blowup slide in a black bathing suit cover-up. The group capped off their celebrations with a festive feast in the backyard, complete with stars and striped décor.

Us confirmed in January that the reality star and the Blink-182 drummer were officially dating after being friends for years. The pair have since showed off their romance by packing on the PDA while traveling together and in Instagram tributes to one another. 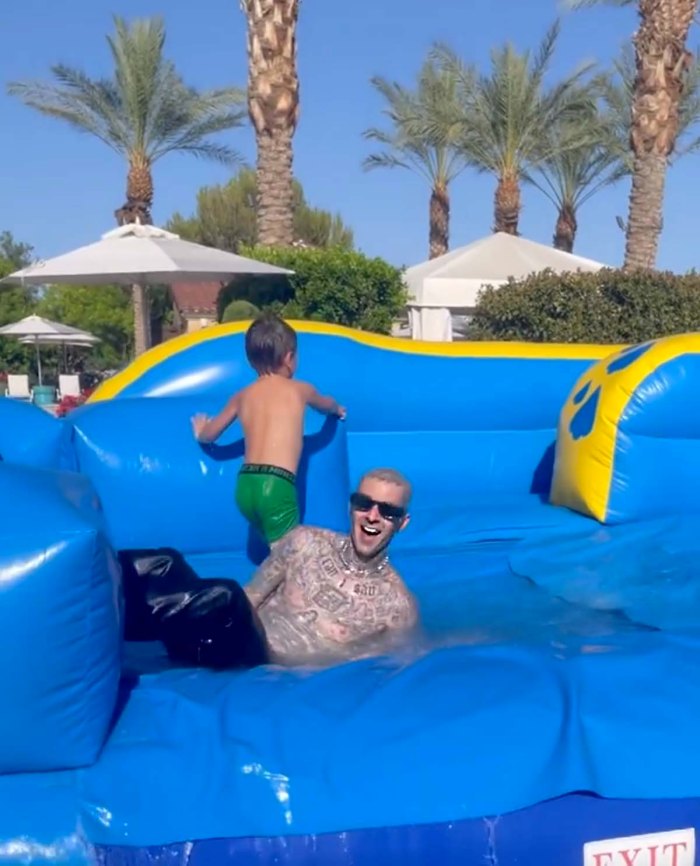 Last month, Barker came under fire after his ex-wife, Shanna Moakler, claimed he hooked up with Kourtney’s sister Kim Kardashian while the former spouses were still married.

Moakler, 46, exclusively told Us in May that she “caught” the musician having an “affair” with the Skims founder, 40, which led to her signing the divorce papers.

Barker previously spoke about his relationship with Kim in his 2015 memoir, Can I Say: Living Large, Cheating Death and Drums, Drums, Drums, admitting he couldn’t stop “secretly starring” at her during a trip to Amsterdam in the early 2000s alongside Paris Hilton.

He insisted, however, that he looked but “never touched” the KKW Beauty founder amid his rocky relationship with Moakler, which came to an end in October 2008 after four years of marriage. The former Miss USA told Us last month that Barker was “100 percent” lying about not hooking up with the Selfish author.

Kim clapped back at the allegations on May 26 via her Instagram Story, telling a fan during a Q&A session that the claims were a “false narrative.” She noted that she has been “friends for years” with the musician and she is “so happy for him and Kourt.”

Barker and Kourtney have not publicly addressed Moakler’s recent claims, instead, they have continued to spend time together and with their kids. Last month, the duo were seen in Disneyland with Kourtney’s little ones and Barker’s son Landon, 17, and daughter Alabama, 15, whom he shares with Moakler.

A source told Us at the time that Kourtney was “aware” of her beau’s past remarks about her sister, but they got together anyway.

“It wasn’t a dealbreaker,” the insider said. “Ultimately Kourtney loves Travis and is pushing it aside. Kourtney and Travis are still obsessed with each other and going strong.”