A special tribute. Ahead of Queen Elizabeth II’s state funeral, eldest son King Charles III had specific requests when it came to her casket display.

Charles, 73, laid a handwritten note atop his late mother’s coffin during the Monday, September 19, processional ahead of the funeral service. His card read, “In loving and devoted memory” and included his official royal signature of “Charles R.”

The signed tribute sat beside a large floral arrangement — which the new sovereign helped pick out.

“At His Majesty The King’s request, the wreath contains flowers and foliage cut from the gardens of Buckingham Palace, Clarence House and Highgrove House,” a statement from the palace noted on Monday. “This includes foliage chosen for its symbolism.”

Charles made sure to include bunches of rosemary for remembrance, English oak for the strength of love and myrtle. The sprigs of myrtle symbolize a happy marriage, which is a sweet nod to her seven-decade marriage to the late Prince Philip, who died in April 2021. The myrtle had been cut from a plant that was grown from a sprig in her original 1947 wedding bouquet. The wreath also included scented pelargoniums, garden roses, autumnal hydrangea, sedum, dahlias and scabious in various hues of gold, pink, burgundy and white.

The reigning monarch also requested that the wreath be made “in a totally sustainable way” using a nest of English moss and oak branches without any floral foam to hold its shape. 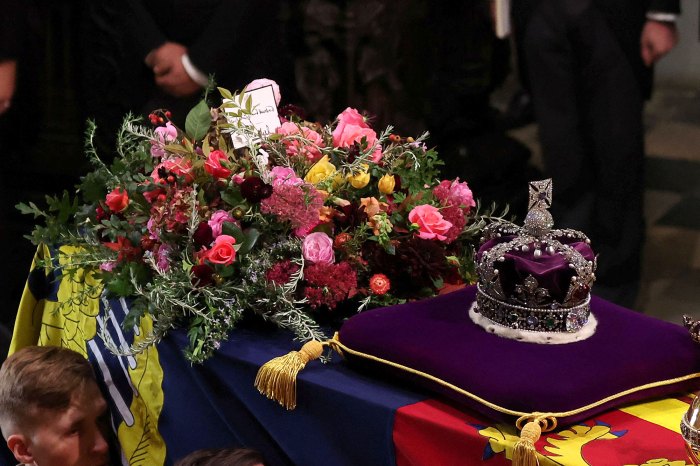 Elizabeth’s coffin — which also was adorned by the Sovereign’s Orb and the Sovereign’s Sceptre With Cross — was carried into Westminster Abbey by the British royal navy on the State Ceremonial Gun Carriage. Charles and his siblings — Princess Anne, Prince Andrew and Prince Edward — followed on foot. Prince William, Prince Harry and Peter Phillips also joined the march.

After the royal family had arrived at the historic cathedral, they were joined by Princess Kate, Meghan Markle, Queen Consort Camilla, Sir Tim Laurence and Sophie, Countess of Wessex. William and Kate’s eldest children, Prince George and Princess Charlotte, walked alongside their parents before the memorial began.

Following the service, Charles, his sons and his siblings accompanied Elizabeth’s casket from Westminster Abbey to Wellington Arch. The coffin will then be driven in a hearse to Windsor Castle for a committal service before she is buried alongside the late Duke of Edinburgh.

Buckingham Palace previously confirmed on September 8 that Her Majesty had “died peacefully” at the age of 96 while at her Balmoral Castle residence in Scotland.

“The death of my beloved mother, Her Majesty The Queen, is a moment of the greatest sadness for me and all members of my family,” Charles wrote in a statement at the time. “We mourn profoundly the passing of a cherished Sovereign and a much-loved Mother. I know her loss will be deeply felt throughout the country, the Realms and the Commonwealth, and by countless people around the world.”

He added: “During this period of mourning and change, my family and I will be comforted and sustained by our knowledge of respect and deep affection in which The Queen was so widely held.”