Rising above. Following her split from Tristan Thompson, Khloé Kardashian made it clear that she wasn’t going to engage in negativity when it came to her ex.

On Sunday, June 20, Tana Mongeau took to social media to speculate about Thompson, 30, being with other women at her party.

“All i know to tweet about my birthday party last night is that tristan thompson was one of the first attendees,” Mongeau, 22, wrote via Twitter. “Like babe where’s true.”

Someone pointed out the following day that Kardashian, 36, responded without actually saying anything.

The reality star liked a tweet from a fan that responded to the YouTuber, saying, “Shut the f–k up. This screams attention-seeking at it’s finest bc you know damn well that man gon make headlines over anything pertaining to women.”

Kardashian’s subtle reaction comes after a source exclusively told Us that her relationship with the athlete was over.

“They remain amicable toward each other and will continue to coparent” the insider told Us on Monday, June 21. “There was no drama that broke them up, things just didn’t work out between the two of them.” 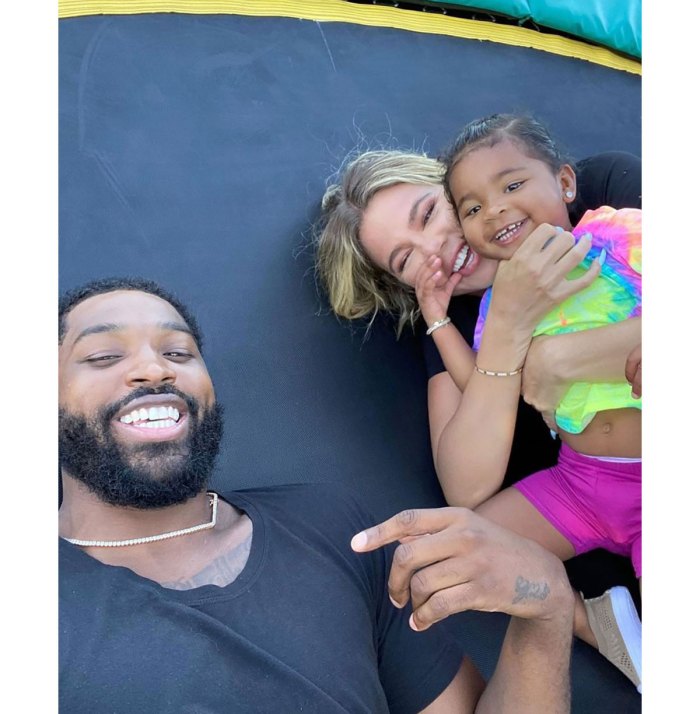 According to the source, the pair “broke up a few weeks ago.”

The Good American cofounder recently opened up about trusting Thompson after their past issues with infidelity.

“I mean, I definitely trust him as a friend and all those things, but I’m not someone that, you know, when I need to find out everything comes my way,” Kardashian told host Andy Cohen during the second part of the Keeping Up With the Kardashians reunion on Sunday, June 20. “I just have to trust … I just need to focus on today and go day by day. I can’t worry too much about everything else.”

Thompson made headlines in April 2018 for cheating with multiple women while Kardashian was pregnant with their daughter, True. While the former Revenge Body host stayed with him at the time, less than a year later Thompson kissed Kylie Jenner’s best friend at the time, Jordyn Woods.

Kardashian and Thompson broke up in February 2019 but got back together one year later.

During the reunion episode, Kardashian added that she has seen all of the work that Thompson put into doing better during their time apart.

“I know all the help that he’s got and the constant efforts that he makes every single day and how hard he fought to get back with me currently,” she explained. “I mean you can ask everyone, it really wasn’t an easy thing for him, but I don’t know why someone would go through all of that if they weren’t really serious.”