Fatherhood stars Kevin Hart as a single dad after the tragic death of his wife (Picture: Netflix)

The poster of Kevin Hart’s new Netflix movie Fatherhood was enough to draw me in alone.

The funnyman is seen laying in a cot looking down lovingly at his small daughter who is cuddled up beside him. Such a simple image might not seem a big deal to some but for many of us, the image of a non-toxic Black father and daughter bond is a rarity on-screen.

Fatherhood is a traumatic, heartbreaking and emotional journey of how one dad is forced to step up for his daughter when his wife dies just hours after childbirth. The first 20 minutes or so make for emotional viewing to say the least, and will undoubtedly be triggering for many.

Over the past few months, it has been highlighted that many women of colour in the UK sadly have negative experiences of childbirth. Statistics have shown that Black women are four times more likely to die during pregnancy or in childbirth than white women.

Fatherhood highlighting this harsh reality was necessary yet traumatic in equal measure.

However, the direction the movie takes after this incident is just as important. That is, showing how the single Black dad adjusts to life after such a tragic experience.

Too often in film, on TV and even in the media we are bombarded with the narrative of the absent or criminal father, particularly with Black families. Precious and Monster’s Ball are just a couple of the prominent movies that spring to mind. Even in real life, too many of us know someone or are the person who has grown up without a dad who actively chose not to be around.

Of course, this is a reality for millions of people around the world.

It’s just a shame that the other side of the coin – the dads who are around but have to go it alone – is rarely presented in a positive light if at all.

In my opinion, Fatherhood gets this right.

Although spurred on by tragedy, it was beautiful to see the small ways Kevin’s character, Matt Logelin, makes an effort to form a close bond with his daughter Maddy (Melody Hurd). Fatherhood confronts the stereotypes of single fathers – the assumption that he ‘can’t do it’ on his own and that he needs women around 24/7 to help him raise his child – and highlights that actually, there are men out there doing it on their own everyday just how single mothers raise their children alone everyday.

Anyone raising a child as a single parent deserves all the applause in the world but it does seem as though the fathers doing the same thing are an afterthought in Hollywood.

It’s clear that the positive representation of the single Black dad seen in Fatherhood is highly sought after. 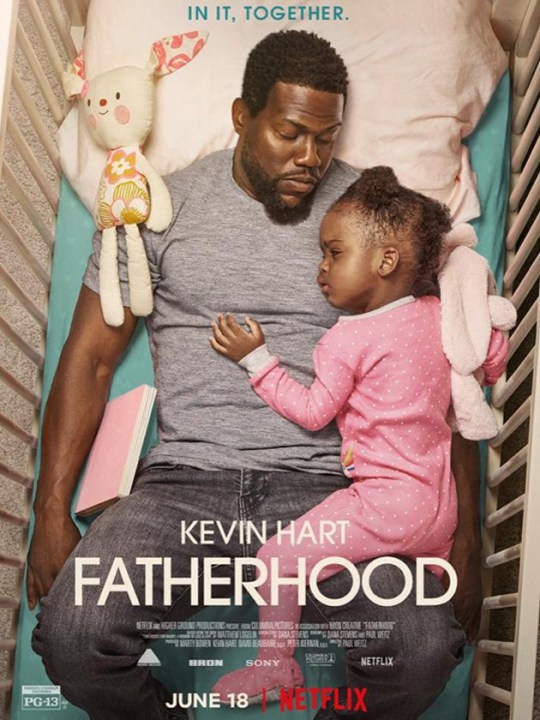 Fatherhood is the representation of Black fathers we need to see more of (Picture: Netflix)

One viewer tweeted: ‘Watching #Fatherhood on #Netflix touching heartfelt & real. Glad someone decided to focus on what men go through, black men and definitely glad they used all chocolate ie black kids instead of mixed which seems to be the norm.’

Another also heaped praise on the drama and said: ‘Just watched Fatherhood on Netflix. It was a really good movie. We need more stories like this that portray black families and black fathers in a positive light.’

‘As a black man, I highly recommend you watch #Fatherhood on Netflix. Had me crying almost all the way through. Kevin Hart really snapped with this one,’ another wrote.

Sharing the same sentiment, one viewer added: ‘It was nice to see another side of @KevinHart4real in this movie. P.S. Let’s see more narratives of Black fathers being there for their children.’

Hollywood has been mostly starved of this representation but there have been some notable moments to the contrary over the years. In 2006’s The Pursuit of Happyness, Will Smith was seen as the father who was up against the odds and could easily have walked away but made sure his son was his priority.

As a black man, I highly recommend you watch #Fatherhood on Netflix. Had me crying almost all the way through. Kevin Hart really snapped with this one

Just watched Fatherhood on Netflix. It was a really good movie. We need more stories like this that portray black families and black fathers in a positive light. #Fatherhood #Netflix

Watching #Fatherhood on #Netflix touching heartfelt & real. Glad someone decided to focus on what men go through, black men and definitely glad they used all chocolate ie black kids instead of mixed which seems to be the norm.
You go boi @KevinHart4real ðð¾ðð¾ðð¾

Denzel Washington in John Q wasn’t a single Black dad – the wife was still in the picture – but the film did focus on his relationship with his son and the (OK, questionable) lengths he was willing to take to save his life.

Similarly, Idris Elba in Daddy’s Little Girls did everything he could to protect his three young daughters from his ex-wife and her criminal lover.

These are all great examples but it’s not enough.

Interestingly, Fatherhood is adapted from the book, Two Kisses For Maddy: A Memoir of Loss and Love, which is based on the true story of a white man, Matthew Logelin. As much as it was Logelin’s real life experience, it has done so much by way of visibility for the Black community that an African-American was cast in the lead role.

Hollywood studios need to make greater efforts in telling positive stories regarding parenting with a Black person at the forefront.

Yes, we’ve seen the positive representations of single Black fathers borne out of trauma. But next, it would be great to see an uplifting tale of parenting within the Black community without the heartbreaking backstory.

A story of their experience just because.

The overwhelmingly warm reaction to Fatherhood proves this should just be the start.