Take the bad with the good! It’s been less than a week since the Bachelor in Paradise season 7 finale aired — and Kendall Long is leaning into all the haters’ comments.

“Sure, I’ll be your villain. … kinda has a nice ring to it,” Long, 30, captioned an Instagram slideshow of herself eating a Ring Pop on Sunday, October 10.

The reality star received backlash following the Tuesday, October 5, finale episode, during which she returned to the beach to confront her ex-boyfriend Joe Amabile one more time, just moments before he proposed to Serena Pitt.

“I came down on this beach and completely was surprised by how it made me feel and by how overwhelming it was,” the Bachelor alum said at the time. “I ended up coming here to fully let you go, and you know, this beach has so many memories. And they’re amazing, and I’ve loved every moment we’ve had, and you’re an amazing person. … I’m really excited for you and Serena, and I felt like I couldn’t leave this beach without fully expressing that to you.” 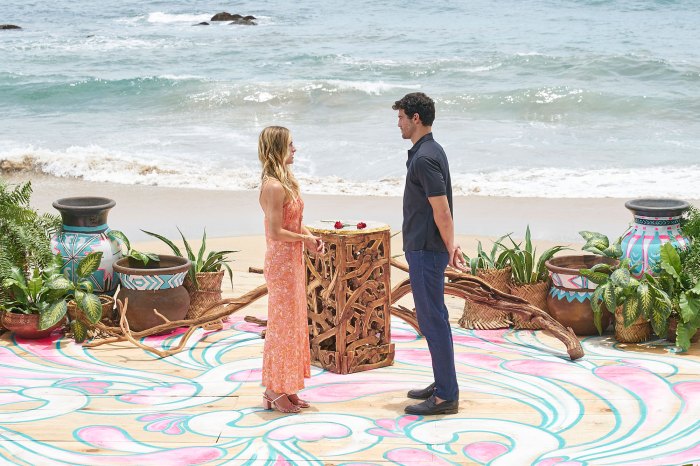 Amabile, 34, and Long first met on season 5 of Bachelor in Paradise but split in January 2020 because she did not want to move to Chicago, while he didn’t like living in Los Angeles.

After her exit on Tuesday’s finale, the former grocer popped the question to Pitt, 23, and the two left the beach engaged — and it doesn’t sound like location will be a hurdle for the new couple.

“Right now, we’re splitting time between Chicago and Toronto, and then we are planning on moving in together in the spring,” the Dancing With the Stars alum exclusively told Us Weekly on Wednesday, October 6. “We’re deciding between probably three locations, either Toronto, Chicago or New York. We’ll figure it out.”

The Bachelor season 25 alum added that they’re taking their time and enjoying their engagement for now, telling Us, “We’re definitely excited to take that step in the relationship and, you know, we both love the East coast, but it’s kind of whatever makes the most sense for us personally and professionally at the time.”

Long, for her part, took to Instagram after the finale aired to remind her fans that she is doing OK after her exit.

“Life’s difficult moments are a lot like takeout food … It’s always better the next day,” the taxidermy enthusiast captioned a slideshow of photos of herself laughing and carrying takeout boxes on Wednesday. “My closest friends and family know me as the one to laugh it off. Sometimes we drop the food and instead of collapsing in the street, paralyzed by what could have tasted so sweet, I break a smile and think … there will always be another cake.”

Amabile also has “no resentment” toward Long, he told Us following the finale.

“It was a little confusing,” he said at the time. “The timing, I would say, wasn’t the best. I was just really focused on Serena and getting to that moment. I had a ring in my back pocket. So it was more like, ‘OK, I get that you’re here, you know, I wish you the best, but it’s not the time. Now is not the time.’ But I hope she’s happy.”