Kelly Clarkson has thrilled fans with her gorgeous rendition of Little Mix’s Heartbreak Anthem on her talk show, hours after the band officially began their hiatus.

Hearts across the nation were left broken after Little Mix revealed they would be temporarily separating this year, with one final tour to round things off.

They performed their last show – for now – at London’s O2 Arena on Saturday night, in front of thousands of dedicated fans.

But someone else who showed their support for the band was pop star Kelly, during her Kellyoke segment on her US talk show.

She wowed on Tuesday’s edition with her gorgeous vocals, which perfectly summed up the bittersweet mix of feelings from fans themselves.

Those who’ve tuned in are already calling for more, with some begging for collaborations with Jade Thirwall, Leigh-Anne Pinnock and Perrie Edwards.

Reacting to the performance on Twitter, one fan wrote: ‘I would pay a sickening amount of money to hear Kelly cover Touch.’

Another shared: ‘CHILLS ALL OVER MY BODY. Literally crying over this cover.’

‘This is magnificent! Now can we get a Kelly x Jade collab?!’ asked someone else.

A social media user commented: ‘OMG COLLAB WITH PERRIE SOLO YOUR VOICES WOULD FIT SO WELL!’ 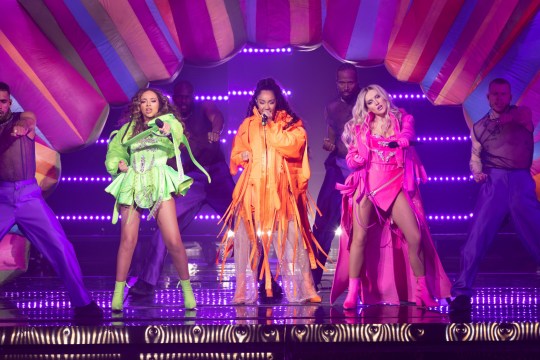 Little Mix bowed out (for now) at the weekend (Picture: Georgie Gibbon/REX/Shutterstock)

‘So glad we finally got a Little Mix cover!! Praying we get Secret Love Song one day,’ another echoed.

We need to see Kelly on Little Mix’s next album, please.

It’s the latest in a long line of stunning Kellyoke covers, having put her spin on tracks from artists such as Harry Styles, The Smiths and Labrinth in recent episodes.

Luckily, it doesn’t seem as though it will be too long before the band are back together, with the girls stressing just how excited they already are to reunite.

At the wrap party after their final gig, they shared: ‘We love each other so much. We are sisters. We are family. It is very bittersweet but it is the best time to do this because we are stronger than ever.

‘We are happier than ever. And we’re already counting down to the reunion, so don’t worry about it!’