Kate Garraway and Alex Beresford ripped into housing minister Robert Jenrick over the free school meals vote on Good Morning Britain, asking him if he regrets voting against it.

Mr Jenrick, who is the Secretary of State for Housing, Communities and Local Government, appeared on the ITV show to speak about the next phase of his Supporting Families government scheme.

When the minister, who appeared with his infamous flag in the background, spoke about how important it is to support children and families amid the coronavirus pandemic, Alex pointed out that he had voted against continuing the free school meals scheme over the school holidays before Boris Johnson made a U-turn on the decision.

‘The families definitely need the support and it’s so great to hear you supporting this scheme,’ Alex said.

‘I just wonder why you voted against free school meals, then, knowing just how important it is that children are fed and watered, and actually can live their lives as [in the best way] possible?’ 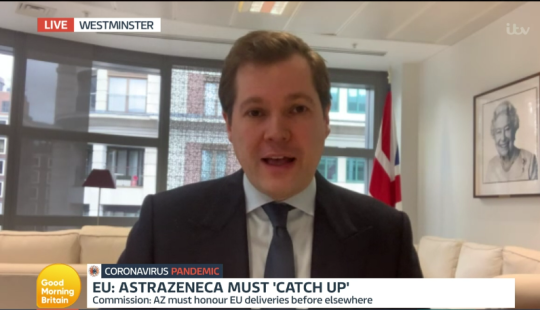 ‘You did in October,’ Kate interjected. ‘You specifically voted against free school meals, not the voucher system, but you personally did.’

Referencing the Prime Minister’s U-turn, she continued: ‘I wonder if, in light of that, you regret voting against it?’

‘Let’s not get distracted on that,’ Mr Jenrick said, with Kate responding: ‘I don’t feel it is a distraction, I feel it’s kind of critical’.

Mr Jenrick clarified that he was referring to the vote itself, insisting he believes the issue is ‘clearly very important.’ 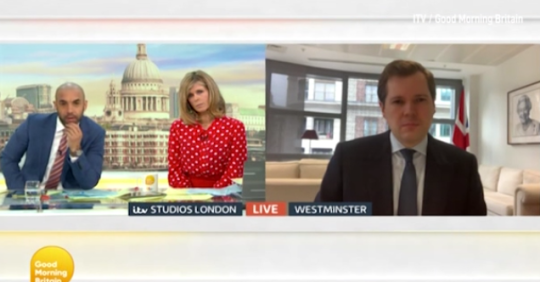 ‘The vote itself was an opposition day debate in parliament, which doesn’t change government policy,’ he said, adding that it was an ‘opportunity for other political parties to make a statement.’

Not letting up, Kate continued: ‘It’s also an opportunity for you to make a statement of your intent. I wonder if maybe you had to do it because you were instructed to do it, and now there’s been a U-turn, maybe you regret that or do you still believe that it was right to not extend free school meals?’

‘I think tackling the issue of child hunger and poverty is absolutely critical, it’s always been important but it’s going to be even more so,’ Mr Jenrick responded, with Kate telling him: ‘I’m so sorry, but that isn’t answering the question.’

Mr Johnson previously made the U-turn decision that the free school meals scheme would continue over the school holidays after a campaign from footballer Marcus Rashford.

Meanwhile, the next phase of Mr Jenrick’s Supporting Families scheme has recently been announced. It includes work to support people to leave abusive relationships, get the right joined-up support for those with mental health issues and help people to find work.

Kate and Alex’s comments come after the weatherman and presenter returned to the GMB presenting panel following Piers Morgan’s exit from the show.

Fans have supported him against trolls, with many thrilled to see him back on their TVs.