Kate Garraway revealed husband Derek Draper burst into tears as he returned home after spending over a year in hospital battling the devastating effects from coronavirus.

It was revealed on Thursday that the 53-year-old had returned to his family home in north London after spending much of the last year in a coma to continue his recovery surrounded by his loved ones.

Appearing on today’s Good Morning Britain, Kate became emotional as she recalled the moment he first entered their house, with children Darcey and William rushing to greet him.

‘When we came in the door, as we pulled up – because I went to the hospital to help bring him home – I could see two little faces of Darcey and Billy looking out the window,’ she told hosts Ben Shephard and Ranvir Singh.

‘They ran out and ran forward and opened the door, and he immediately burst into tears. There was a lot of hugging.

‘We got him inside and he absolutely knew he’s home.’ 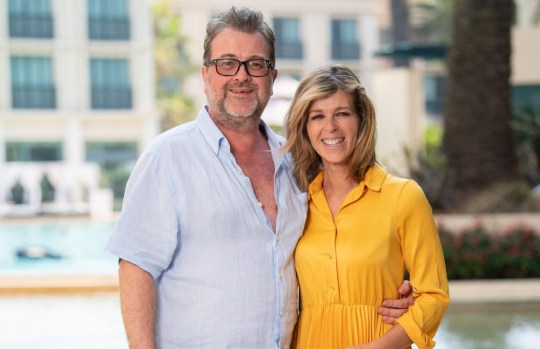 Sharing an update on his health, the I’m A Celebrity star explained he is ‘responding all the time’ but isn’t able to converse as he normally would.

Kate also explained there had been ‘so many lovely little moments’ since his return, including the first time she set the dinner table for four people.

‘I don’t know, it just feels like the start of a huge chapter but a really, really big and important one.’

Speaking of their kids’ reaction to having their dad back in the house, she added: ‘They’ve both just not stopped cuddling him. 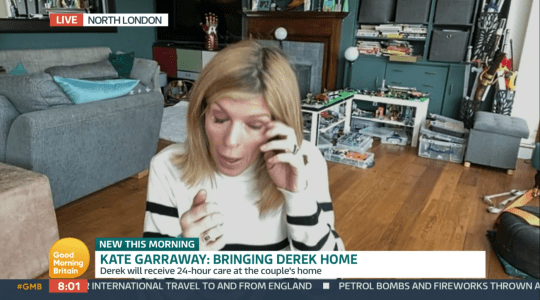 ‘Actually it was a very late night… all lying in a bed, I came back downstairs to sleep in the same room as Derek.

‘Bill said, and Darcey agreed, they both just said, “Mum, he is home, let’s just take that in, he’s home”.

‘They’re just delighted he’s home. I’m trying to balance the emotions of the next stage.’

Earlier in the episode, Kate’s co-stars celebrated the news of Derek’s homecoming, with Richard Arnold describing the update as a ‘godsend’ for the family.

Derek had been one of the worst-affected coronavirus patients to survive in the UK.

He was rushed to hospital last March with coronavirus symptoms, and had been fighting for his life in a coma ever since – with the illness affecting his entire body.

It is hoped being around his family will boost Derek’s mental health and help him make further breakthroughs in his recovery.