Kate Garraway and Ben Shephard are officially film stars, as they unveiled a surprise cameo in the upcoming Tom and Jerry movie.

On today’s instalment of Good Morning Britain, Richard Arnold shared a clip of the hosts in action, alongside Chloe Grace Moretz and Rob Delaney, as they caused chaos as two cartoon elephants.

Giggling about the appearance, Kate, 53, joked that the part of an animated elephant was ‘made for her’.

‘Suggestions that we’ve been typecast are harsh but probably fair,’ Ben, 46, replied. ‘What a thrill though, Tom and Jerry is such a hugely important part of my life and Kate’s life as kids growing up and watching it.

‘So the fact they’re bringing it to the big screen, it’s that mixture of animation and live action. I initially was really nervous because I’m so fond of Tom and Jerry, but watching what they’ve done is amazing.’ 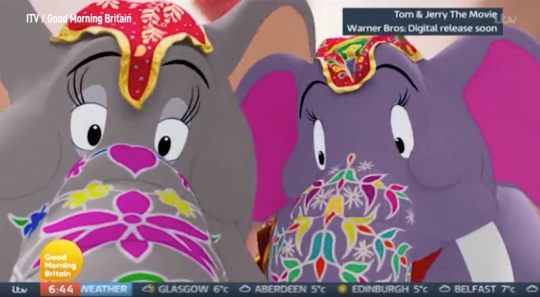 The mum-of-two agreed: ‘They’ve kept the energy of the original Tom and Jerry, haven’t they?

‘They’ve kept the fun and the frivolity which I was desperate for, the humour and the wryness of it, and that rivalry. But they’ve just really updated it beautifully and made it more fun.

Tom and Jerry is set to be released in May, so we’ll get to see the pair steal the show for ourselves. 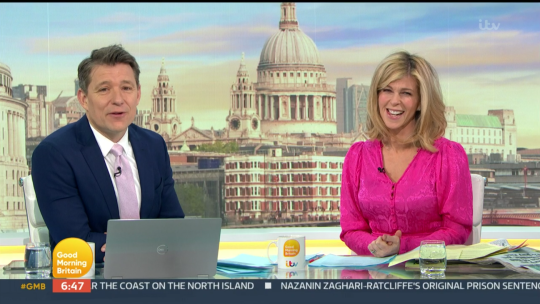 Ben Shephard and Kate Garraway lifted the lid on their Tom and Jerry stint (Picture: ITV)

Spilling the beans about life on set, Kate laughed: ‘I was accused of being a bit too Margaret Thatcher, wasn’t I?’

‘A little bit of Margaret Thatcher in there, dial down the Iron Lady,’ Ben said. ‘It was a real thrill to do it.

‘We recorded this quite a while ago now, and to be able to go in and do it when everyone’s socially distancing.’

Kate added: ‘It was so much fun to do, we were so thrilled to be asked. I think the movie is going to be brilliant.’

The news comes after it was revealed that the I’m A Celebrity… Get Me Out Of Here star would be fronting a documentary about her difficult year – as her husband was hospitalised with coronavirus.

Derek Draper, who has been married to Kate since 2005, has been in hospital since March 2020 after testing positive for Covid-19.

Despite being free of the virus, it has wreaked havoc on his body, leaving holes in his heart and lungs, and he is still battling for his life almost one year on.

Announcing the special show on Thursday, ITV bosses said Kate will ‘open up about the challenging year for her family’ in the scenes.

Good Morning Britain continues on weekday mornings, at 6am, on ITV.