What is the truth? (Picture: AP/HYBE)

What a morning for the BTS ARMY – not only have they been gifted with a new BTS single and video, but they also have to cope with the news that Jungkook appears to have a new facial piercing.

Never a moment’s rest with these boys.

The video is serving black and white mugshot scenes, slick choreography and looks a-plenty – even a shout-out to the ARMY via some rather adorable cheerleader moves.

But one styling choice has had more of an impact on social media than most.

In the Butter video, Jungkook sports purple hair and what looks like an eyebrow piercing, although seems to be two crystals stuck on – think Euphoria (the show, not the song) chic. 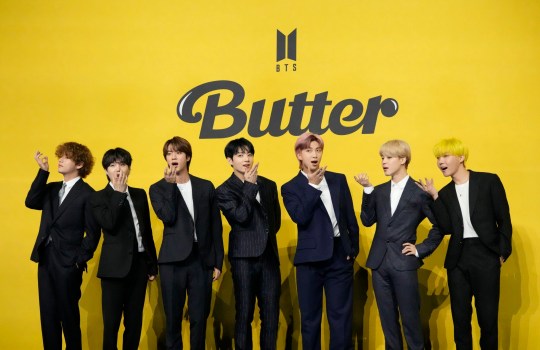 The boys were back to promote their new music (Picture: AP)

Fans were loving the accessory – but were not expecting Jungkook to rock up to this morning’s IRL press conference with what seems to be the real deal.

The maknae appeared to have had a silver bar pierced through his eyebrow, and while it has yet to be confirmed if the piercing is actually real, ‘THE PIERCING IS REAL’ began trending on Twitter as fans struggled to cope.

For what it’s worth, the piercing does look pretty real, and wouldn’t be totally out of the blue, considering Jungkook also has a large collection of tattoos.

The 23-year-old also shook up his look by dyeing his colourful hair black again and getting a shorter cut.

Meanwhile, at the press conference, Jin joked about V’s perm curls, asking the room: ‘Doesn’t it look like a poodle?’

V explained why he chose the bold look, saying: ‘This is a hairstyle I could only do once in my life, it’s something I’ve always wanted to do.’ 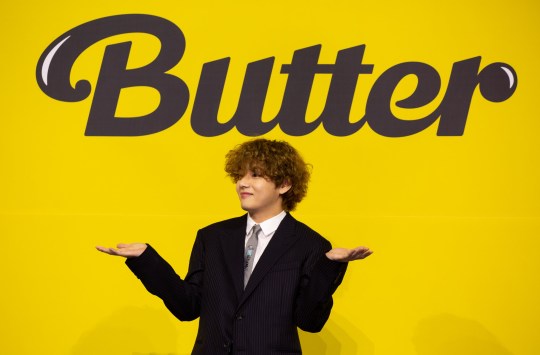 BTS are hoping Butter will be a song of the summer, and the Billboard Music Awards this weekend will host their debut performance of the upbeat track.

Their last two big singles, Dynamite and Life Goes On, reached number one on the US Hot 100, and considering the power of the ARMY, we wouldn’t be surprised if they managed the triple.

BTS also seemed to smash the YouTube premiere record with the release of the Butter MV this morning, with Forbes reporting that the video drew an estimated 3.89 million concurrent views to its midnight premiere.

Butter is out now.