Joanna would love to reunite with Mathew Horne for another episode (Picture: Baby Cow)

Joanna Page is desperate for Gavin & Stacey duo Ruth Jones and James Corden to write another episode before she’s too old to reprise her role.

The 45-year-old actress played Stacey in the hit BBC sitcom and she has urged the writing duo to return to the comedy sooner rather than later as she still wants to look good on screen.

She said: ‘If they are going to do another special I hope they do it soon because seeing yourself up on a screen after having children and it’s 10 years later is a bit shocking, it’s like, “Oh my gosh!”

Joanna – who has four children with her husband James Thornton – has not spoken to Ruth, 55, or James, 43, about the possibility of a new episode but she is certain that if the time comes then all the cast, including Rob Brydon, Mathew Horne and Larry Lamb, will be up for returning.

‘I never ask them if they’re going to do anymore and they keep us in the dark, they never tell us,’ she told the Andy Jaye Podcast. ‘I thought it was completely over last time, I only found out we were doing it again when Ruth phoned and said, “Do you want to do this special?” 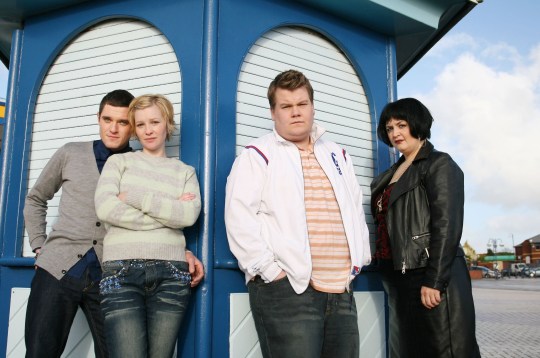 Joanna wants James and Ruth to get a move on (Picture: David Tarling/ BBC Picture archives)

‘I thought it was completely over. They’ve not given us any signs that they’re going to do another one so I wouldn’t be surprised if they left us all hanging and never did another one again and just left us all wondering what happens.

‘But then I wouldn’t be surprised if I suddenly got a phone call from Ruth again going, “Right, we’re going to do another one.” I think we’d all love to.

‘We’re all like family, so I think if they said we’re going to do more then we all definitely would be wanting to do it because it’s great working with them all.’

The 2019 Christmas special ended with Nessa (Jones) proposing to on/off lover Smithy (Corden) on Christmas Day in Barry, Wales, and Joanna, just like all the show’s fans, is desperate to know if he said yes.

Joanna added: ‘I’m dying to know what happened. When I read the last special I was reading it on my phone in the car park and I was just scrolling up and I could see that she got down on one knee and proposed and I was like, “Oh my gosh.”

‘And I kept trying to scroll to see what happened and it was the end. I couldn’t believe they left us like that.

‘I’ve gone to being like the rest of the audience, because they just don’t tell us anything, “Are they going to get married? Does he say yes? What’s gonna happen?” ‘

Gavin & Stacey is available to stream on BBC iPlayer.