“It was traumatic,” the 45-year-old reality TV alum exclusively recalled during an interview on Us Weekly‘s “Here for the Right Reasons” podcast. “It was life-changing. It was eye-opening [and] put things in a perspective that life can kind of take a turn like that, you know? But after a couple months, I was really back to normal.”

The illness causes the immune system to react against the nervous system, which can lead to paralysis and weakness throughout the body. “It can become a chronic condition, but fortunately I am not one of those [cases],” the Bachelorette alum explained. “The odds of me getting it again are the same as me getting it in the first place.”

The New York native has been “doing well” since his initial episode, recalling that “it came on within less than 24 hours.” The recovery process was “really, really challenging,” Rosenbaum told Us, adding that it “took probably close to two full months” to regain mobility.

During a recent Q&A with his Instagram followers, Rosenbaum said that it was “humbling” to “make a full recovery” after struggling with his health. “I was very lucky to be diagnosed quickly and treated quickly,” he wrote. “It limited the damage to my nerves so they were able to heal … Many other people are not as fortunate.”

Rosenbaum was hospitalized in December 2019, revealing in an Instagram Story video at the time that he was struggling with “things you do every day, like picking up this phone, or buttoning buttons, tying shoelaces, putting on deodorant.” His then-wife, Ashley Hebert, noted in a social media upload of her own that the construction manager was “in treatment and doing well.” 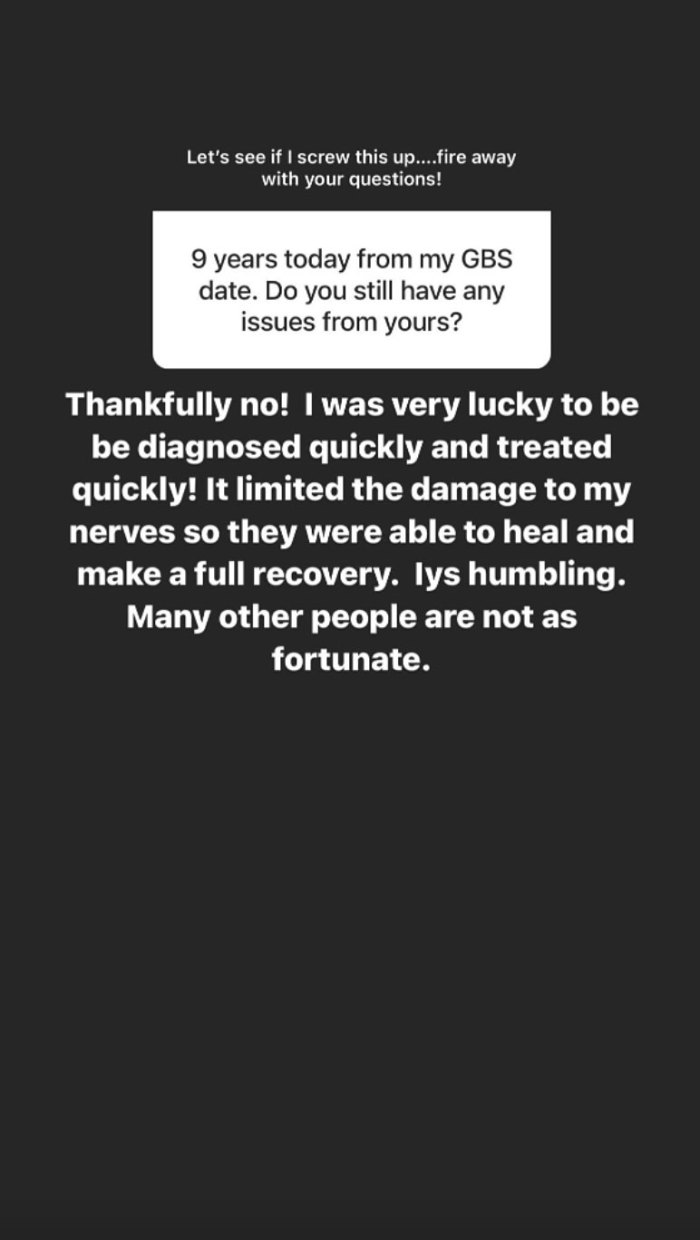 Less than one year later, the ABC personalities announced via Instagram that they had split. The former couple met on season 7 of The Bachelorette in 2011 and got married in 2012 before welcoming son Fordham, 7, and daughter Essex, 5.

“Our ultimate focus is to co-parent our kids to the best of our ability and to maintain stable and healthy lives for Fordy & Essie,” Rosenbaum wrote in his statement at the time. “From the bottom of my heart, thank you for all your love and support throughout the years. It has really meant a lot to us! Wishing you all love, happiness, and good health.”

Hebert, for her part, noted in a post of her own, “We created the most beautiful children and shared memories that will never be forgotten. Our differences have taken a toll on our relationship and after years of attempting to repair the damage, we’ve decided that it is in our family’s best interest to create new and separate lives for our children.”

Us broke the news in October 2021 that the duo finalized their divorce and reached a confidential settlement. Hebert has since moved on with boyfriend Yanni Georgoulakis, but there’s no tension between the exes when it comes to coparenting.

With reporting by Sarah Hearon