It’s been exactly one year today since It’s A Sin crash-landed onto British television, forever transforming the landscape of LGBT voices both past and present, shaping our future like nothing before it.

The world finally paid attention to the ongoing HIV pandemic which runs through the LGBT community when Russell T. Davies’ blistering drama launched on Channel 4, following a group of gay people looking forward to their colourful futures packed with sex, dancing, creativity and love, unaware their lives would be cut short by the deadly virus.

Few television shows have had quite the force of It’s A Sin, if any.

Immediately thousands of people got tested for HIV, gay activists found their platform reached incredible new heights and the conversation around LGBT lives was booming.

One year on, It’s A Sin’s impact is still thriving and will no doubt be talked about for years to come with generations that will long outlive the viewers of 2021 feeling the effects of what was truly a ground-breaking moment in LGBT television.

And to think, most mainstream channels rejected It’s A Sin while even Channel 4 slashed its initial eight episodes down to five.

Metro.co.uk spoke to some of the people whose lives were transformed by It’s A Sin, looking back at a year since Richie, Jill, and the residents of the Pink Palace became trail-blazing heroes of the community. 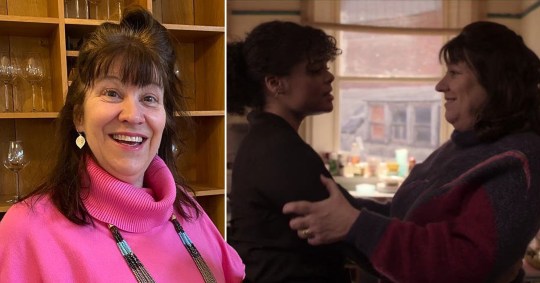 Jill was the real-life hero behind It’s A Sin (Picture: Channel 4)

I’ve had a coupe of lovely things happen to me. The families of the people who passed away, more the nieces and nephews and siblings, said It’s A Sin prompted them to get in touch to say how it made them feel about their uncles, how they’re proud of them now and it doesn’t feel like a secretive thing.

That’s happened to me personally and I think a lot of people around the country.

The gay prides this year, a lot things were focusing on It’s A Sin and people had the chance to be honest and open about their diagnosis. I’ve had a few people personally share with me they are HIV+, and said It’s A Sin helped them come to terms with it, which is an amazing thing that’s happened.

It made me realise we did have a difficult time, you set it as part of your own life and you don’t really think about it much until people look back and say, “that must have been horrible.” Obviously it’s horrible when you lose people but you don’t realise how quite how prejudiced and how stigmatised gay men were until you realise things aren’t like that now. It’s pulled things into focus, I now reminisce about people a lot more than I would have.

Personally I’ve also been asked to write a book! I’m piecing together the information from the 1980s and that’s been amazing because I never would have thought about doing anything like that. 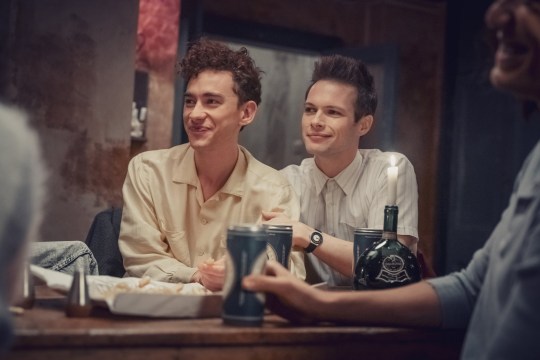 I was the only openly HIV+ person in the cast of It’s A Sin. The whole team took the responsibility for telling our community’s stories seriously, but for me, the show had a deep and personal resonance. The show came at pivotal moment in my life. I was diagnosed in 2003 aged just 16, and up until 2017, the shame of the diagnosis plagued my life. My family didn’t know and the trauma of my past had led me into toxic relationships and to drink and drugs.

But in 2017, I decided to rid myself of my own internalised shame about being gay and HIV+ through my solo stage show First Time. It was First Time that got me noticed by Russell and the producers of It’s A Sin, in fact I found out I got the role whilst performing First Time at the Edinburgh Fringe in 2019! First Time was already making waves and I was proud to join a long line of activists fighting HIV, but It’s A Sin helped amplify the work we were doing massively.

Now the show is coming to The Pleasance in London this National HIV Testing Week (7 Feb) in the Pleasance Main House. I’m thrilled to be working closely with Terrence Higgins Trust on their campaign.

From drug and alcohol fuelled rock bottom, to loud and proud actor and activist, shame just doesn’t get a look in anymore.’

Chris Ceegan, who reached out to the nurses who cared for his partner Lawrence when he was dying of Aids 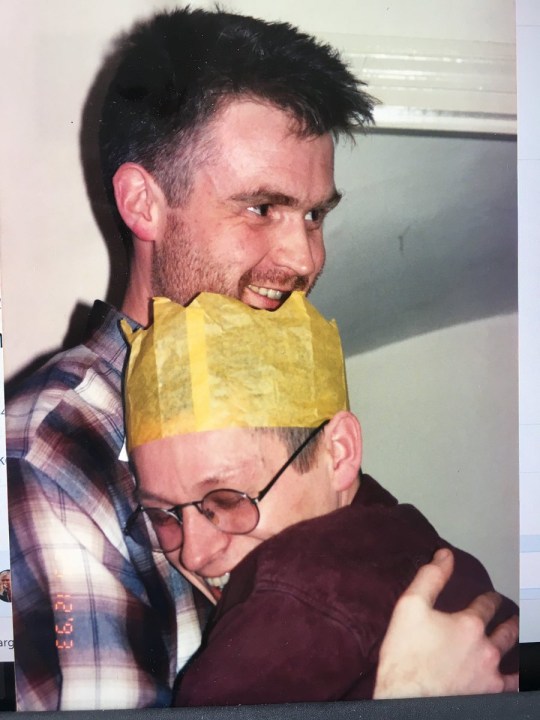 Chris (left) was inspired to reach out to the nurses who cared for his dying partner Lawrence (Picture: Chris Ceegan)

All the way through It’s A Sin there were multiple moments which resonated with my experience and what happened to Lawrence. I found it profoundly redemptive, millions of people now know what we went through and that’s had a profound impact on me.

Lawrence was put in a room on his own and people wouldn’t touch him, people wouldn’t clear up his vomit. There was a lot of fear and a lot of ignorance and he experienced a lot of that. He was very angry about having to deal with all this, probably inherently skeptical and questioning what that health service would provide.

Every now and again I’ve tried to find the nurses and doctors who cared for him on social media and I haven’t managed to find them, but as all of the noise and the coverage around this period began it made me determined. Initially, I found one of the doctors who had worked most closely with Lawrence over the last six months. When I spoke to her, I was recounting other people I remember and she was still in touch with them so she put me in touch with the nurse.

Marc Thompson, co-founder of Prepster and director of The Love Tank 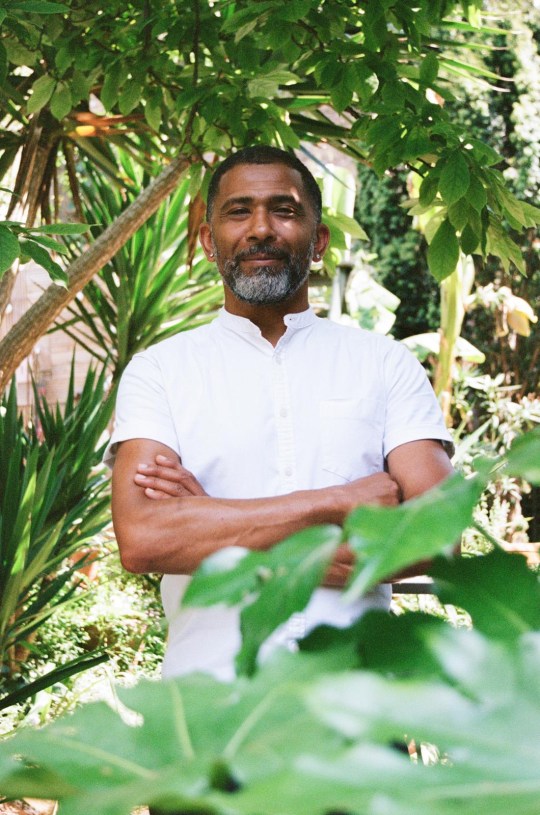 ‘It’s A Sin brought the epidemic back on people’s lips’ (Picture: Marc Thompson)

It’s A Sin had a huge impact on me because a man who has been living with HIV since 1986 a lot of those characters weren’t even diagnosed yet, and took me back to a particular place and time.

It was a reminder of what we as a community and a particular generation have gone through, how painful it was, how the inaction of government, the harsh reaction from media lead us to a really dark place and lead us to being infected, isolated, alone and managing a condition on our own.

It also reminded me of how our communities – and I say communities, not just our gay community – came together and responded when nobody else cared about us.

I’m glad it kickstarted the conversation again, I’m glad it saw an uptick in HIV testing, although I have my own views about that, and the epidemic was back on people’s lips, the narrative was back in the public consciousness. However, it didn’t remind people that HIV impacts a wide range of communities, it didn’t reflect the devastation that was brought upon Black communities and women and that hasn’t been changed since It’s A Sin and we missed a trick on that.

Regardless, it meant I was called to do lots of reaction about where we are and how far we’ve come. It gave activists and health promoters the opportunity to walk into a door to say, “You saw that but this is what it means today.” So it could provide that opportunity.

The series made me think hard on what my struggle of being a south Asian gay man was and where the struggle of being gay and part of society really began from. It amazed me, made me research and go out and want to learn even more than what I thought I already knew, not just out of curiosity, but from a point of respect and reverence for those that pushed boundaries and sacrificed for the rest of us that are part of the community today.

The Focus on the issues of aids and HIV at the time was hard hitting, I had known of the struggles and issues and heard stories from gay men that experienced all of that first hand but seeing it come to life was beyond emotional.

It certainly made me question my own levels of safety when it comes to sex and I immediately felt this need to go out and get tested and to be more on top of my own sexual health and it’s a feeling that’s kind of stayed with me, not out of fear, but more out of awareness for my own self.

The biggest lasting impression of the series for me is a feeling of gratitude, seeing the experiences of the characters in the series is moving for sure, but I’m grateful to learn and see what the previous generations have done for us and very grateful for what they built and what I have now.’ 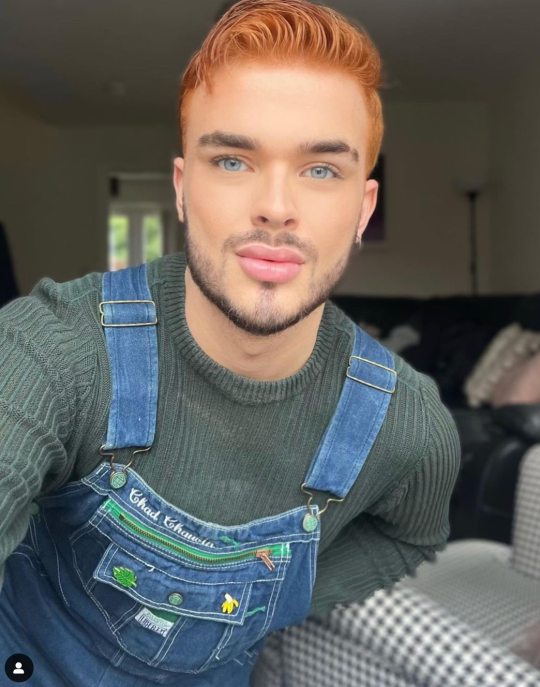 It’s A Sin gave me a wake-up call I need to practise safe sex myself (Picture: Instagram/Toby Lee James)

‘As a gay man who moved to London who is heavily involved in the gay scene I could relate to “It’s a Sin” a lot. I moved away from my home town because I never felt accepted by the people around me, I grew up in a very small minded town and me moving to London helped me escape, grow and become the person that I am today.

‘Watching It’s A Sin makes you realise for one that you aren’t alone. Growing up as a queer kid can be really scary, feeling all kinds of emotions and feelings that you aren’t taught as being normal.

‘It’s so nice to have representation on television for younger generations to be able to relate too and also to be taught the harsh reality of the HIV and Aids crisis, and gave me a wake-up call I need to practise safe sex myself and look into sexually transmitted diseases more.’

It’s A Sin is available to stream on All 4.