‘I’m scared that I might throw up but I gotta hold it down because I’m the first black person to host SNL y’all,’ she later joked, before adding: ‘I’m not, but you believed it for a sec.’

Issa went on to reveal that she was meant to host the show back in March, when she had two films and season 4 of Insecure, and now her only current projects are puzzles.

‘I have nothing going on,’ she pointed out. 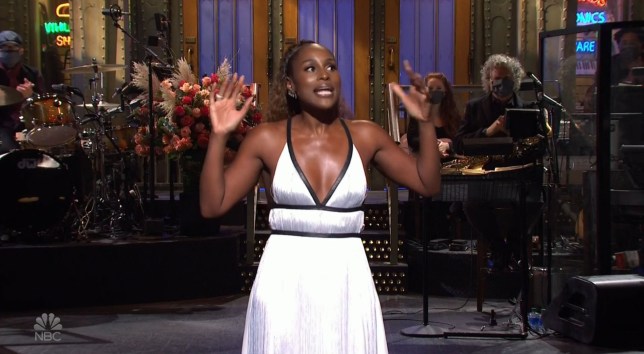 Discussing her show Insecure premiering around the 2016 election which saw Donald Trump win, Issa commented: ‘It felt really awkward for my life to be going so good. It was rude to be peaking while democracy was collapsing.’

Viewers were over the moon to see Issa hosting the show and flooded Twitter with their sentiments.

Wow as proud of @IssaRae . From awkward black girl to insecure to snl. Her ascension to superstardom is inspiring and had me tearing up a bit tbh

Iâm beyond proud of @IssaRae letâs never take away from her Journey from her YouTube series over 6 yrs ago where I constantly watched it to Now hosting @nbcsnl letâs never forget tonight seriously! Itâs a marathon not a sprint TMC. ðð#ISSAOnSNL #InsecureHBO

Watching @IssaRae on SNL and Iâm like, so proud. Iâve followed her career since Awkward Black Girl on YouTube.

From ABG to SNL! I’m so proud of Issa Rae #SNL

I’m so proud of Issa Rae! I know she’s gonna do the damn thing tonight on SNL. 13 year old me is jumping for joy but she should probably stop jumping because the whole house is shaking.

‘I’m so proud of Issa Rae!’ penned one. ‘I know she’s gonna do the damn thing tonight on SNL. 13-year-old me is jumping for joy but she should probably stop jumping because the whole house is shaking.’

Meanwhile, another wrote: ‘In 2011, I was watching Issa Rae’s YouTube sketch show with my mom and now we get to see her on SNL. I’m so proud.’

Issa first garnered attention for her work on the YouTube web series Awkward Black Girl, which premiered in 2011.

In 2013, she began working on a comedy series pilot for Insecure, in which she would star as the main character, Issa Dee.

The show first premiered in 2016 and it’s currently on its fourth season.

Saturday Night Live airs Saturdays on NBC in the US.