GASPING for breath, Lucy Lewis made the nerve-shredding walk towards the bomb – knowing one wrong move would be the difference between life and death.

She had seconds to identify the huge explosive, defuse it and save everyone in the nearby area. 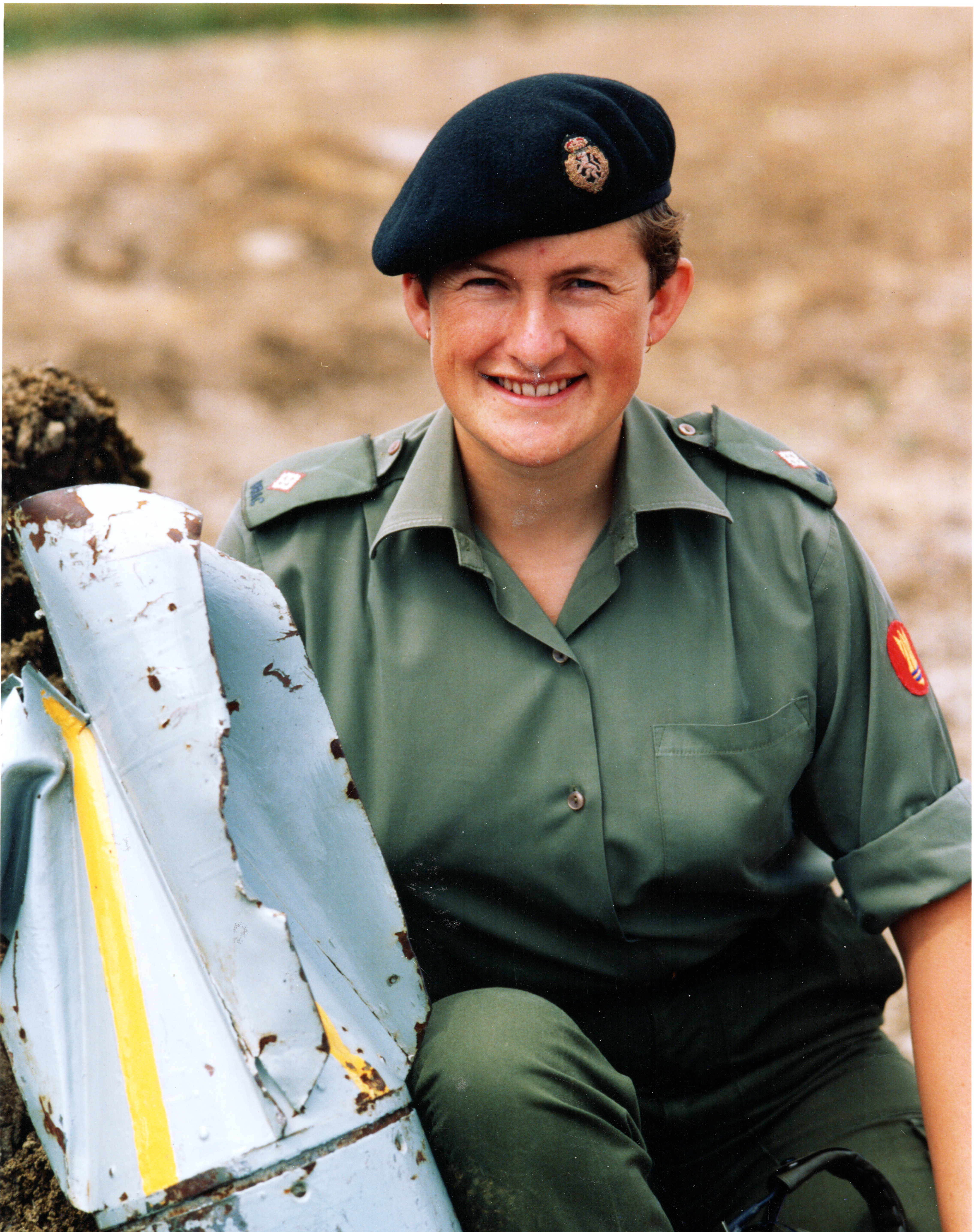 In the process she became the first ­British woman to work as a bomb ­disposal expert.

Lucy was one of the bomb disposal officers — known as “expos” in London’s Met police, who deal with explosives in the capital — producer Mercurio studied for the show.

And today she reveals the intense pressure of the job and the startling parallels between her life and that of Vicky’s character Lana.

Speaking exclusively to The Sun, Lucy said: “On my first job, I remember the nerves on the ‘long walk’ to the bomb and thinking, ‘This could be it’. There is no adrenalin rush like it.

“As a bomb disposal officer you have to think like a bomber. You have to always be one step ahead.

“These bombs now are complicated things.

“They’ll have wires that will double bluff you, ones that are weight sensitive so they would kill a heavier man, rather than his wife.

“The stakes are so high. There is no other job quite like it.”

Vicky stars alongside Adrian Lester as her colleague Joel Nutkins.

Mercurio has said he hopes the drama will lead to the recruitment of more female bomb-disposal experts.

Army major Lucy says women are perfect for the role.

She explained: “Woman can be more methodical and calmer. There are some great men doing it but women are just as capable.”

On my first job, I remember the nerves on the ‘long walk’ to the bomb and thinking ‘This could be it. ’ There is no adrenalin rush like it.

She said: “As a woman there was a feeling that we are being set up to fail.

“The obstacle course was for taller men and even the issue Browning 9mm pistol is designed for a large male hand.”

After months of gruelling training, Lucy and other would-be officers were called to a meeting to find out what role they would be taking on with the Army if they passed.

She was asked if she had a steady hand — before being assigned as a bomb disposal officer in 33 Engineer Regiment EOD.

Lucy said: “I knew if I screwed up it would make it harder for any woman trying to become a bomb disposal officer in future.”

She went on to do further specialist training, where she and other recruits were taught to stay calm in even the most ­terrifying circumstances.

Lucy said: “We were flung into boats, had ‘explosives’ thrown at us, people shouting at us, it was dark.

“We were made to sprint then be expected to stay cool and detonate a bomb. It was exhilarating.” 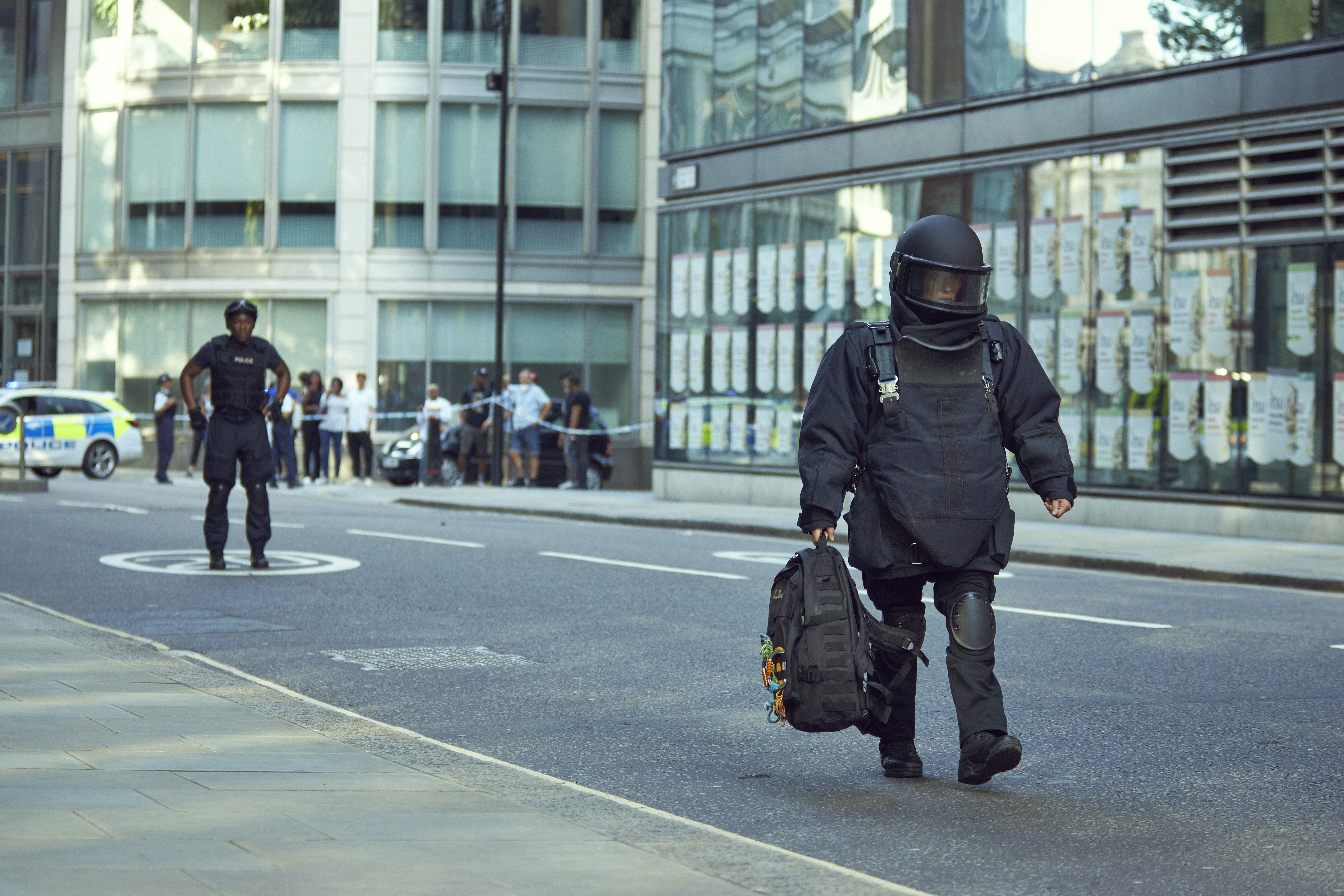 Her career put all her training into ­practice — and more.

She said: “I could defuse all types of bombs and was a battlefield expert on chemical weapons, how to locate buried bombs and mines.

“I could also clear improvised explosive devices (IEDs), the terrorist bomb, by thinking like the bomber, ‘What do I want the victim to touch? Where would they stand How can I catch them out?’

“It was like a game of chess, how can I get two steps ahead of the bomber?”

When Lucy got her first official call-out — clearing 18 40ft World War ­Two unexploded mines at an airport in Hampshire — her heart was racing.

She said: “The risk of explosion was so high that six miles of the nearby M27 was closed, trains diverted and 14 homes ­evacuated.

“Everything was going through my head like, ‘What if this goes wrong?’ I was also aware that this was the first time a woman had ever done this, which was ground-breaking.

“I remember the long walk. I was full of nerves. But when I defused the bomb, the elation I felt was like nothing else. I’m proud that moment led the way for other women.”

Bomb disposal officers are targets for terrorists, so I would change how I travelled to work every day, anything to break a predictable pattern. And I always checked under my car.

Her career had plenty of hairy moments — and one call-out to unexploded bombs in Shoeburyness, Essex, almost spelt ­disaster after she had set a small explosion and moved back.

Lucy said: “I was counting down — ‘five, four, three, two one’ — over and over again and nothing happened.

“We were a distance away. I looked through my binoculars expecting to see a small puff of smoke but instead I saw this huge mushroom of smoke building.

“My heart sank. I closed my mouth, which was open.

“The explosion would’ve blown my fillings and teeth out had I not. I’d got it wrong.

“It showed that even when you had done hundreds of these before, it could always come back to bite you.”

In the summer of 1990, the Gulf War began. The IRA were also plotting more and more attacks.

Lucy said: “I was constantly reminded that we could never escape the death aspect of the job.

“During the Falklands War, the casualty rate of bomb disposal officers was 100 per cent.

“My attitude was one of blind denial: It won’t happen to me. I kidded myself that if the worst ­happened then death would be ­instant and painless.

“Bomb disposal officers are high-value targets for ­terrorists, too. I adopted safety measures, such as changing how I travelled to work every day, varying the time I set off. Anything to break a pattern.

“I checked under my car carefully and always used different routes when I went out running.”

Everything was going through my head like, ‘What if this goes wrong?’ I was also aware that this was the first time a woman had ever done this, which was ground-breaking.

Lucy later transferred to the British Military Police, where she did tours in ­Germany and ­Northern Ireland.

She served for eight years until 1998 and became a major before retiring to start a family.

But old habits die hard. She said: “Because of what has happened to colleagues, I instinctively avoid getting too close to the car in front so that I can’t pull out and get away.

“When I visit a restaurant or a pub I still won’t sit with my back to the door. I also open all parcels standing up, as it saves getting your legs blown off. And not over a flat surface as it deflects the blast into your face.”

Viewers will tomorrow see Vicky McClure’s character deal with debilitating flashbacks — and Lucy told how she ­experiences the same thing.

She said: “I still get them, and have trouble getting to sleep. The smallest thing can take me back to an explosion and other people’s injuries.”

She said the death of Lisa Head, the first British female bomb ­disposal expert to be killed on the job, while working in Afghanistan, hit her and the bomb disposal ­community hard and served as a reminder of people’s fallibility in the role.

She hopes Mercurio’s drama stays true to her former profession — but understands that TV cannot always hit the nail on the head.

Lucy said: “Jed is much better than most with attention to detail. But in the show trailer I’ve seen a lot of countdown clocks. You don’t get that luxury in the real job.

“I’ve seen Vicky ­looking under a car with a torch. But you’d probably send a robot to check nowadays. Bombs can be tiny and covered in a mud-like substance so they just look like the dirty underside of a car.

“But Vicky seems like a great casting for a strong female role. 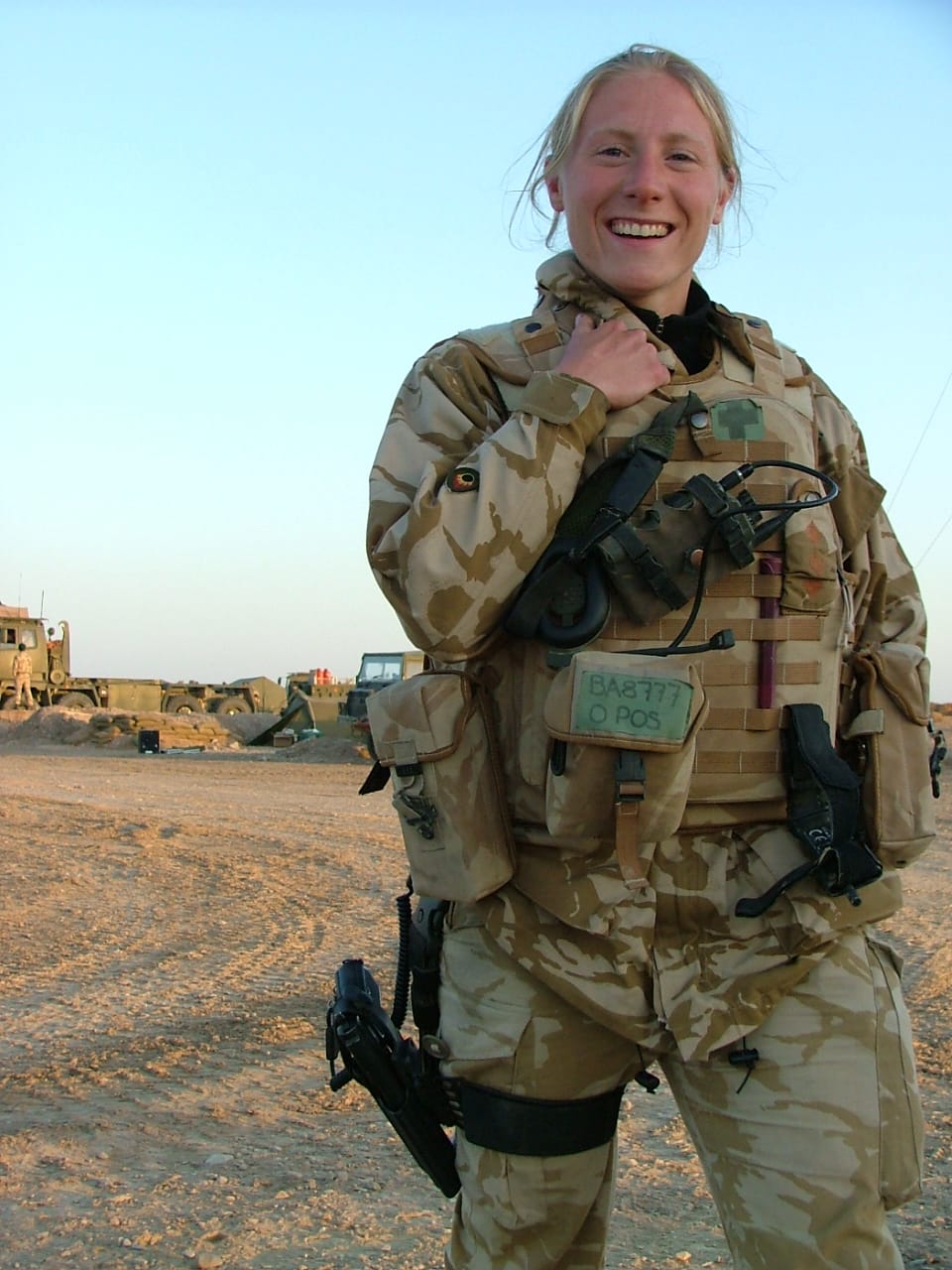 Lucy says: ‘I was constantly reminded that we could never escape the death aspect of the job’ 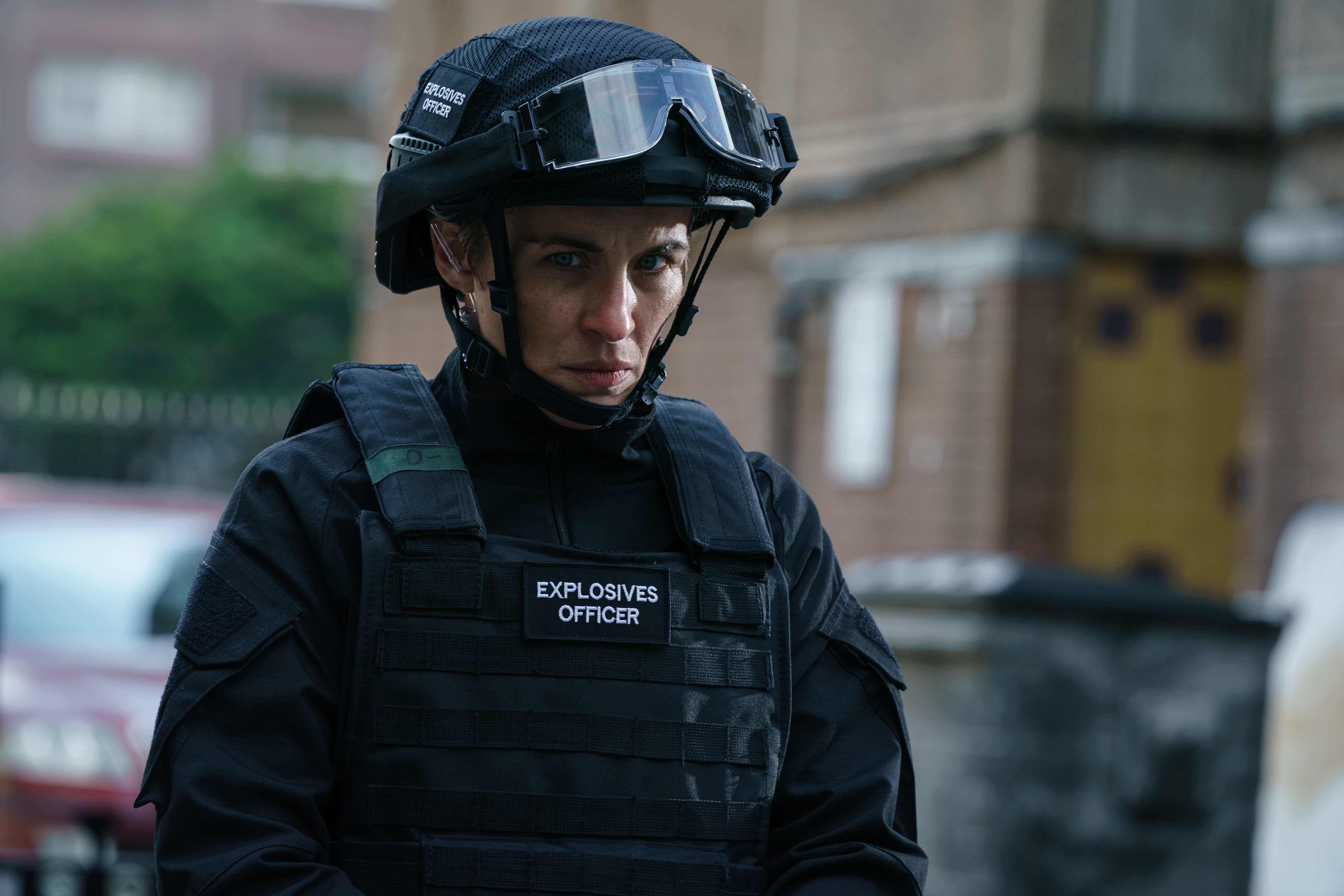