KYLIE Jenner’s sprawling headquarters is pink, white and stunning all over. 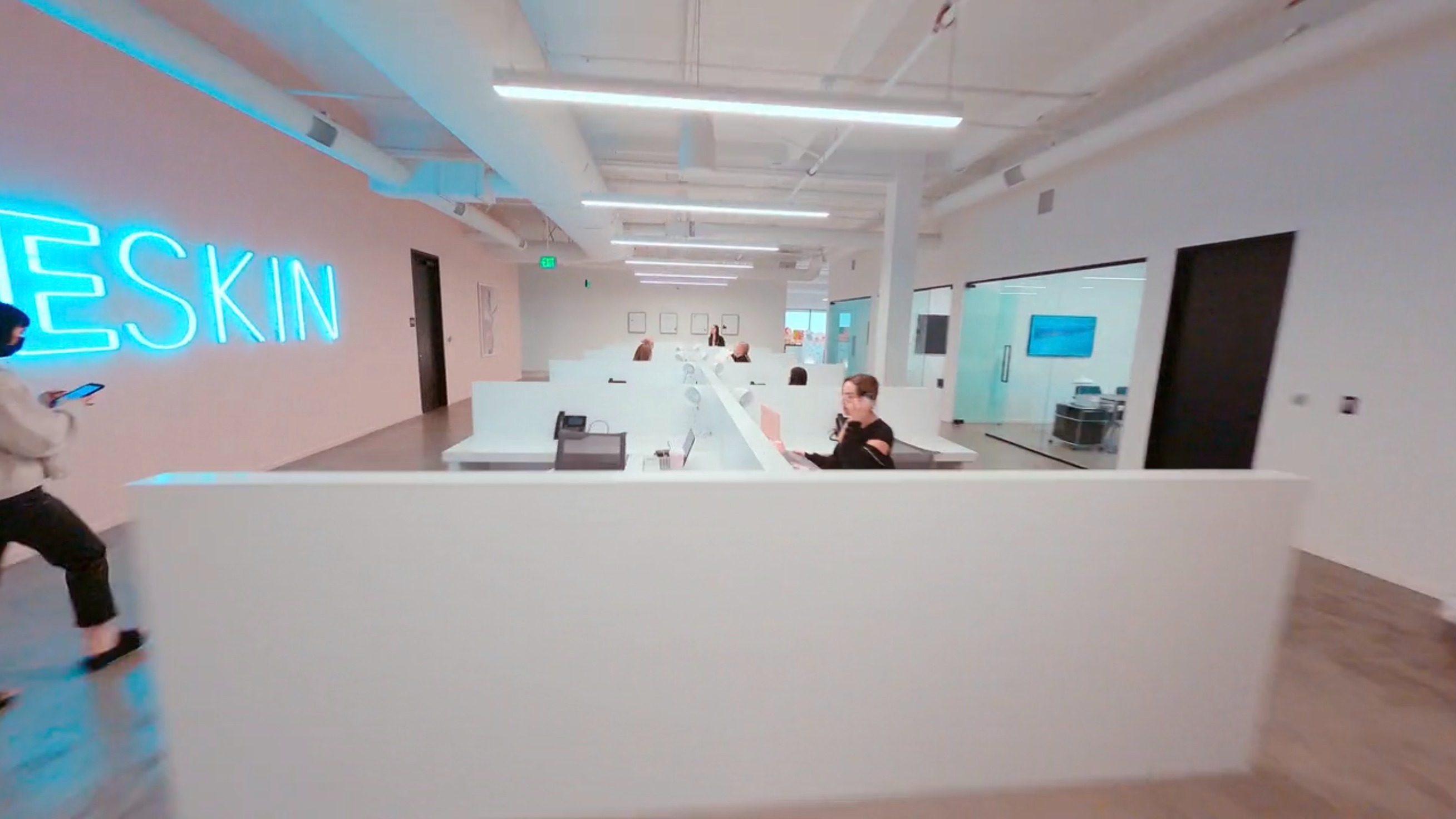 She gave fans a glimpse inside her sprawling pink & white brand headquartersCredit: Hulu 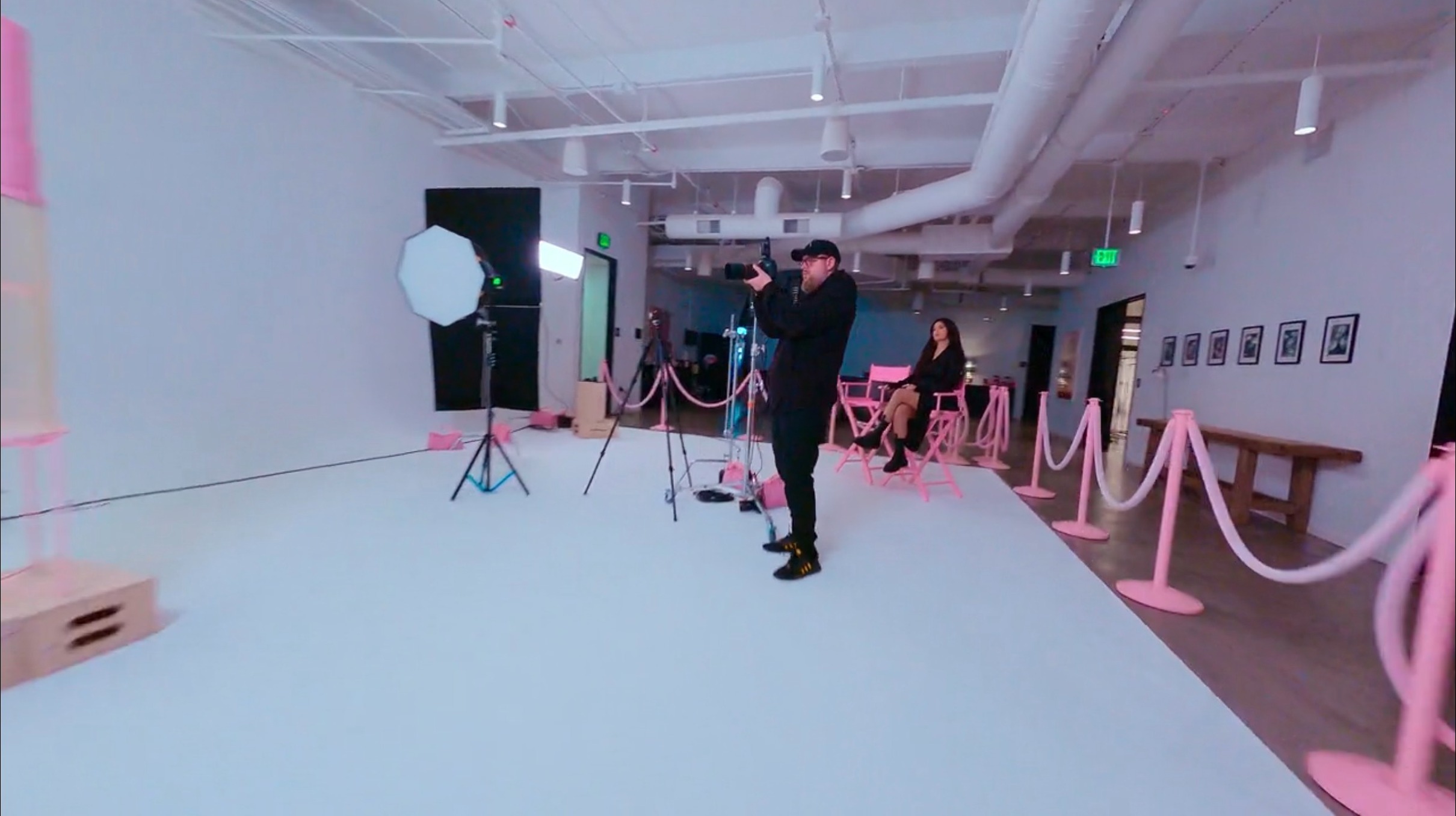 In the intro, fans saw leather couches, the photoshoot studio and so much moreCredit: Hulu

And she seemingly didn’t cut corners on her Kylie Cosmetics office – it all begins as the massive lip-shaped front doors open wide. 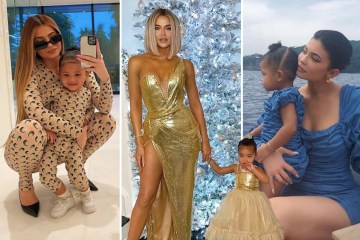 A sign reading “KYLIE” in lit pink neon greets visitors, who then walk to the right and enter the main space – if they’re allowed in.

The huge office opens up, lined in white fabric benches with multiple conference rooms to the right behind glass panes.

To the left in the airy main hall, a giant portrait of Kylie and her signature pout is placed. 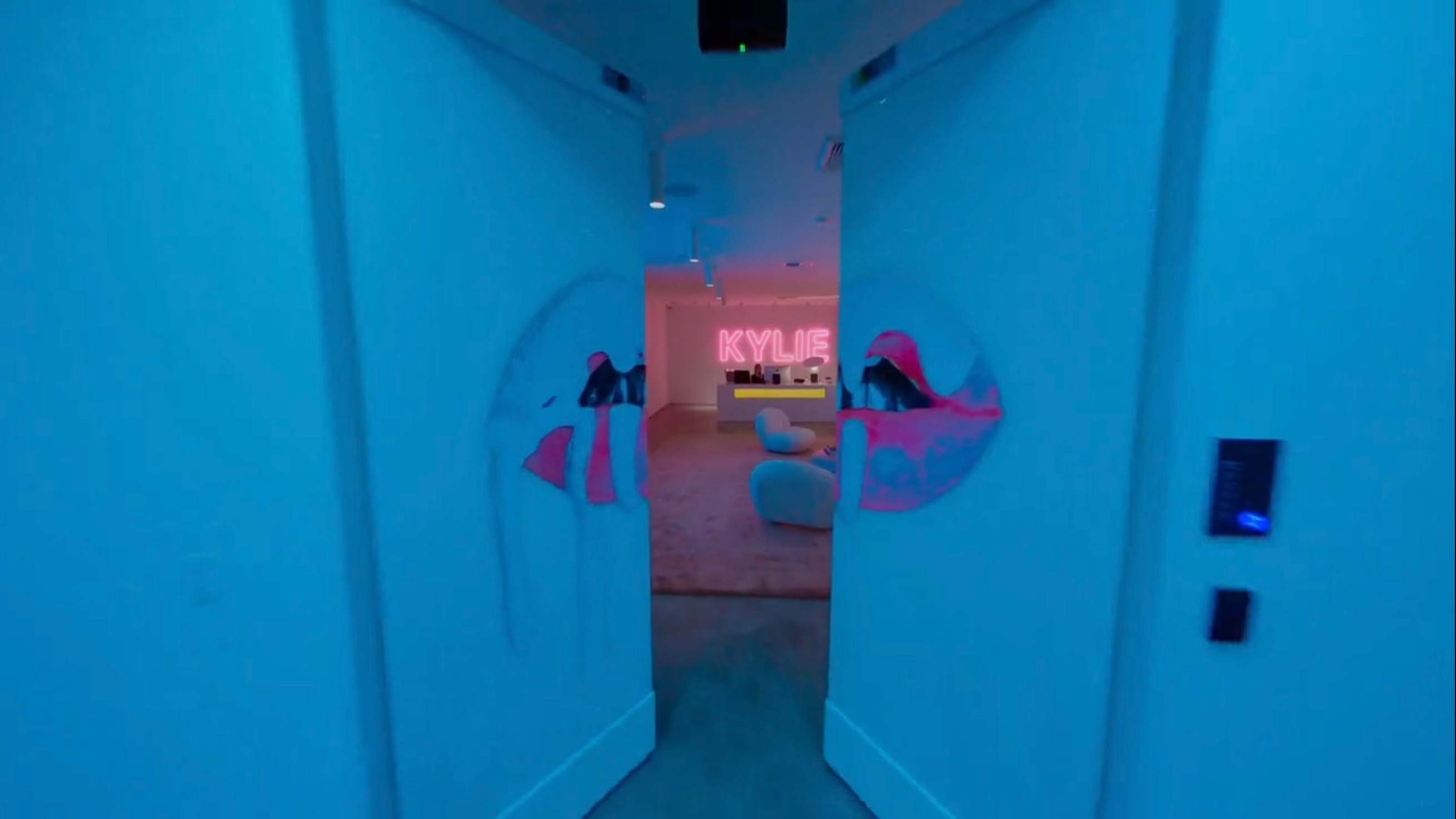 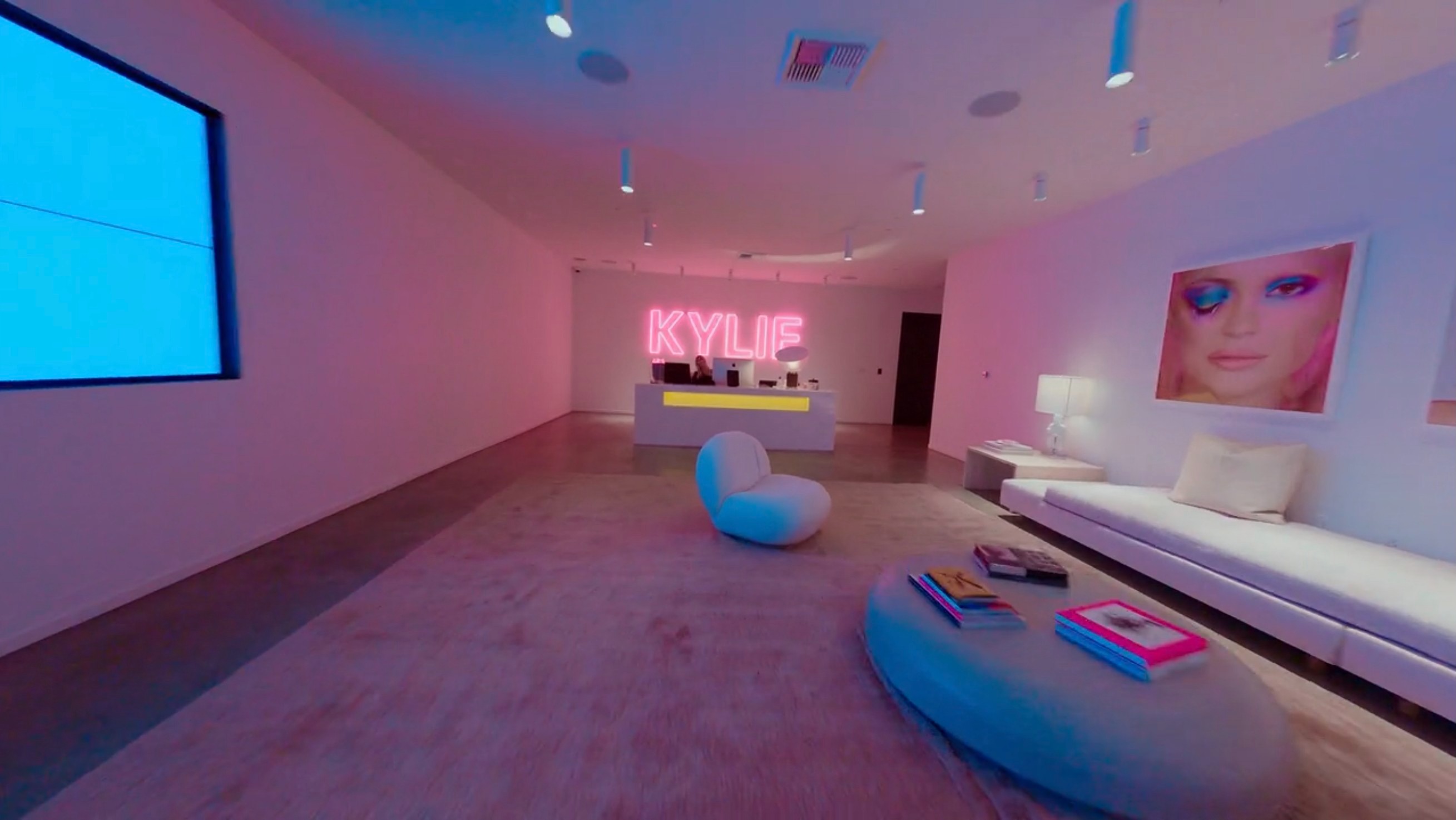 They open onto a minimalist foyerCredit: Hulu 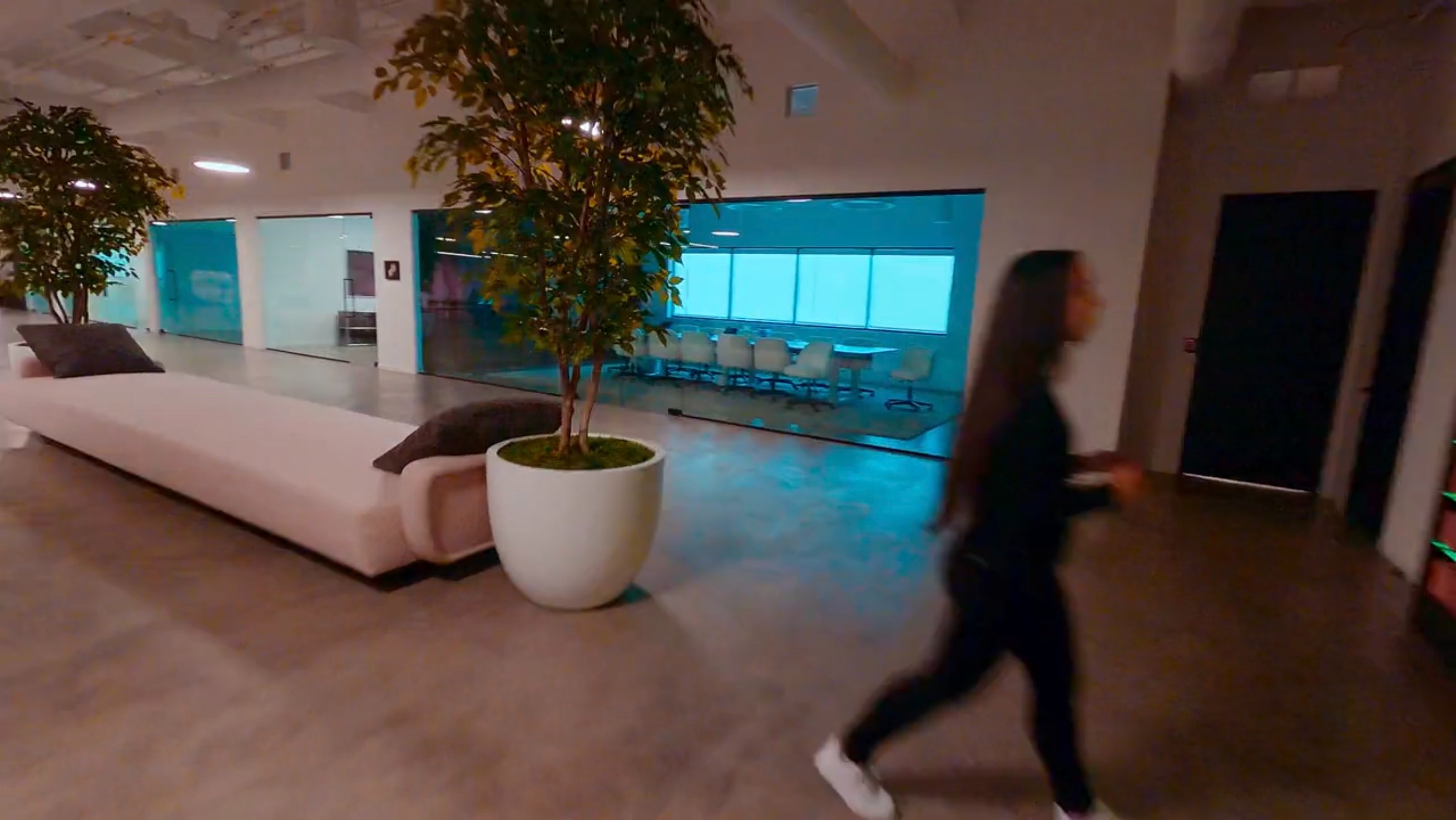 The office features rows of modern benches and conference rooms of glassCredit: Hulu 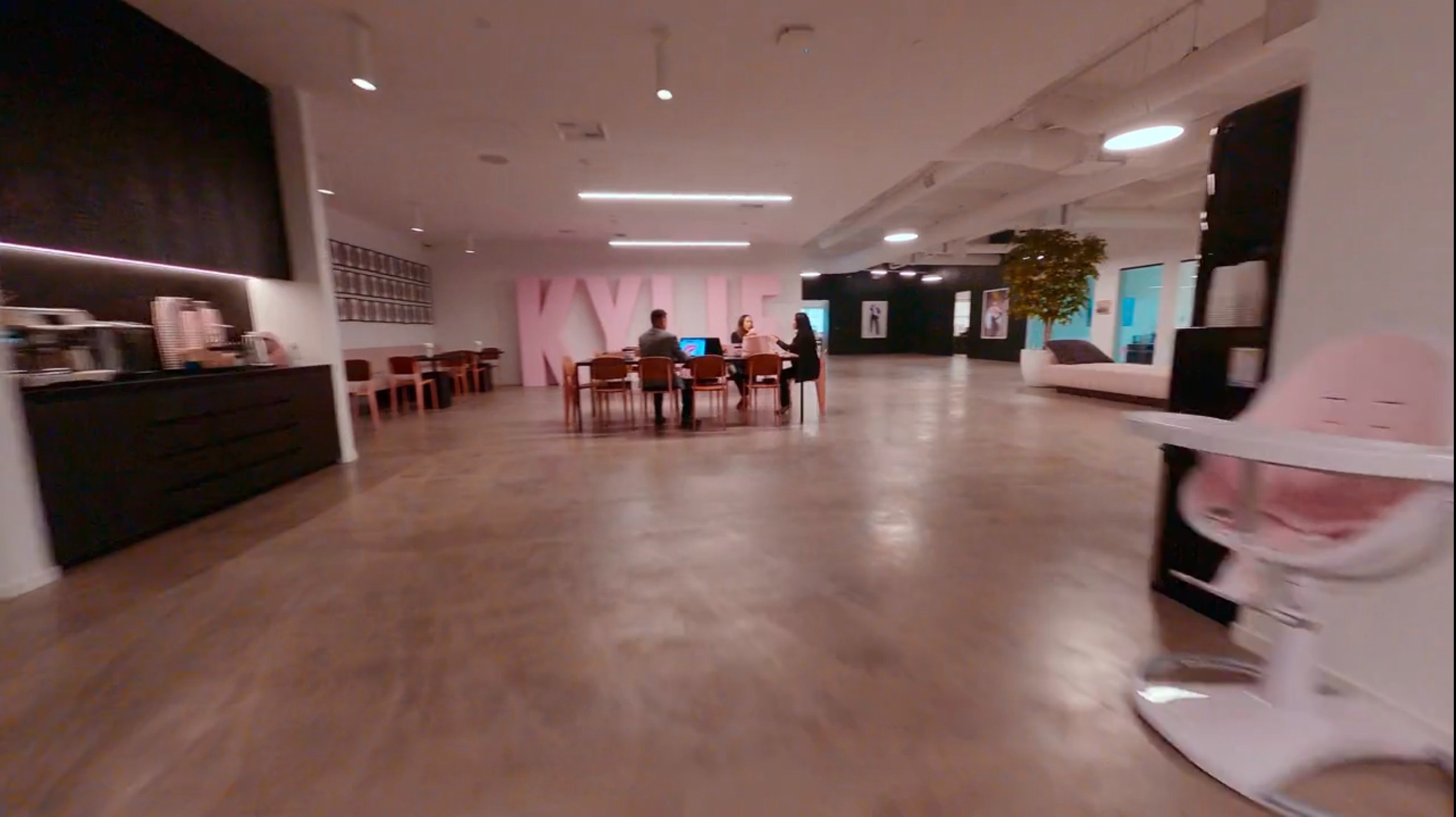 The pink and white sprawling space has Kylie iconography everywhere and fans haven’t seen it like this beforeCredit: Hulu

The mom-of-two started her brand in 2014 and it’s said to be located in Oxnard, California.

Planters and a bouquet of white flowers – her “favorite” – are placed throughout.

The spacious hall then opens up into a chic kitchen space and a conference table where multiple employees were talking shop.

Kylie recently posted a video on her Instagram Story showing off a Skittles vending machine in her office.

The machine featured two kinds of the candies decked out in her branding.

Behind the kitchen, another giant sign that read KYLIE could be seen – and towards the back would appear to be the executive suites.

As the camera continued, a statue of a plump pout could be seen as well as a rolled-up $100 bill pedestal – before flying into mom’s corner office.

Kris has her own room in the far right back, with a white sofa, TV and Teen Choice Award surfboard across from her desk. 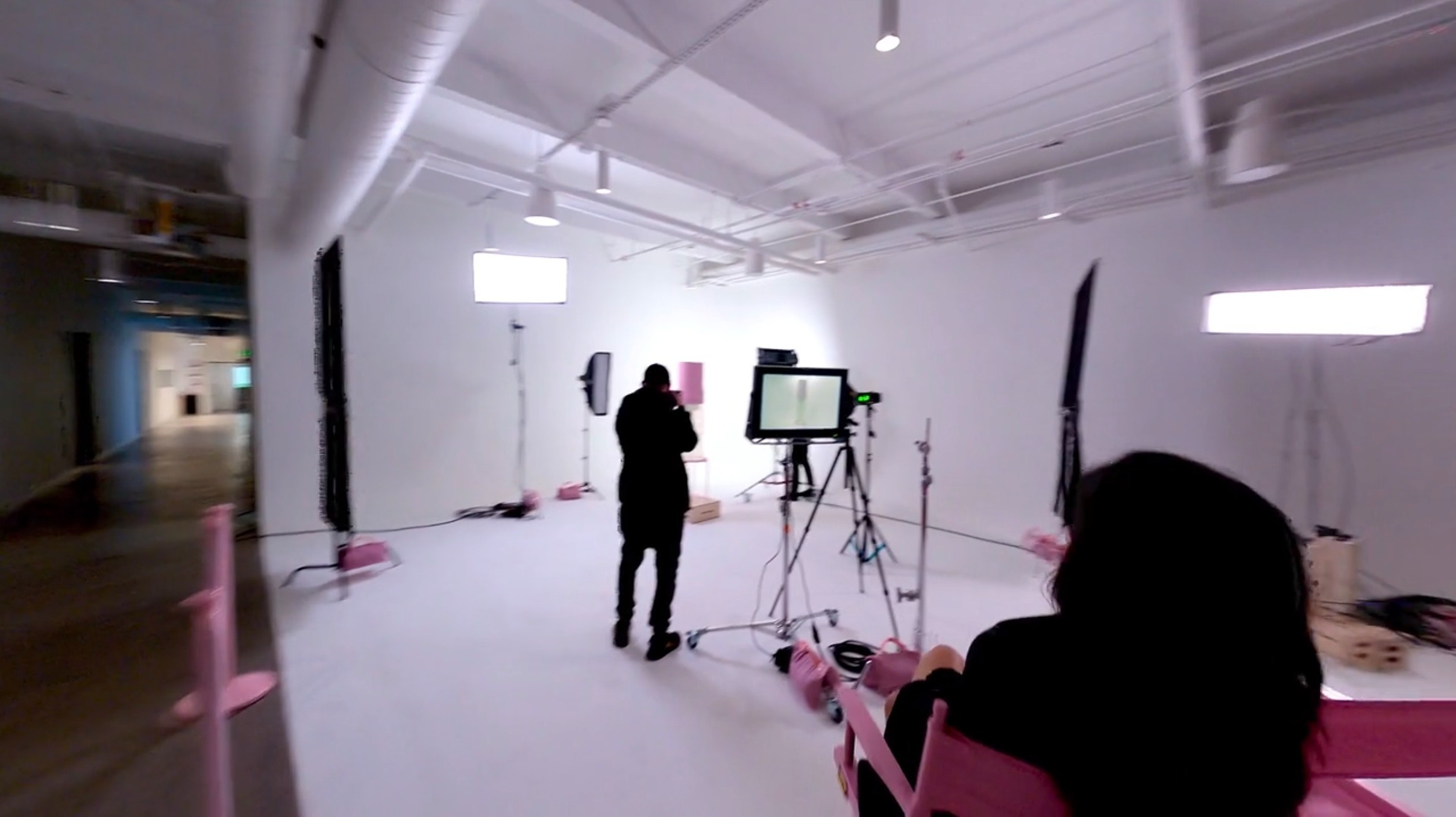 In The Kardashians Hulu intro, Kylie’s huge photoshoot studio can be seenCredit: Hulu 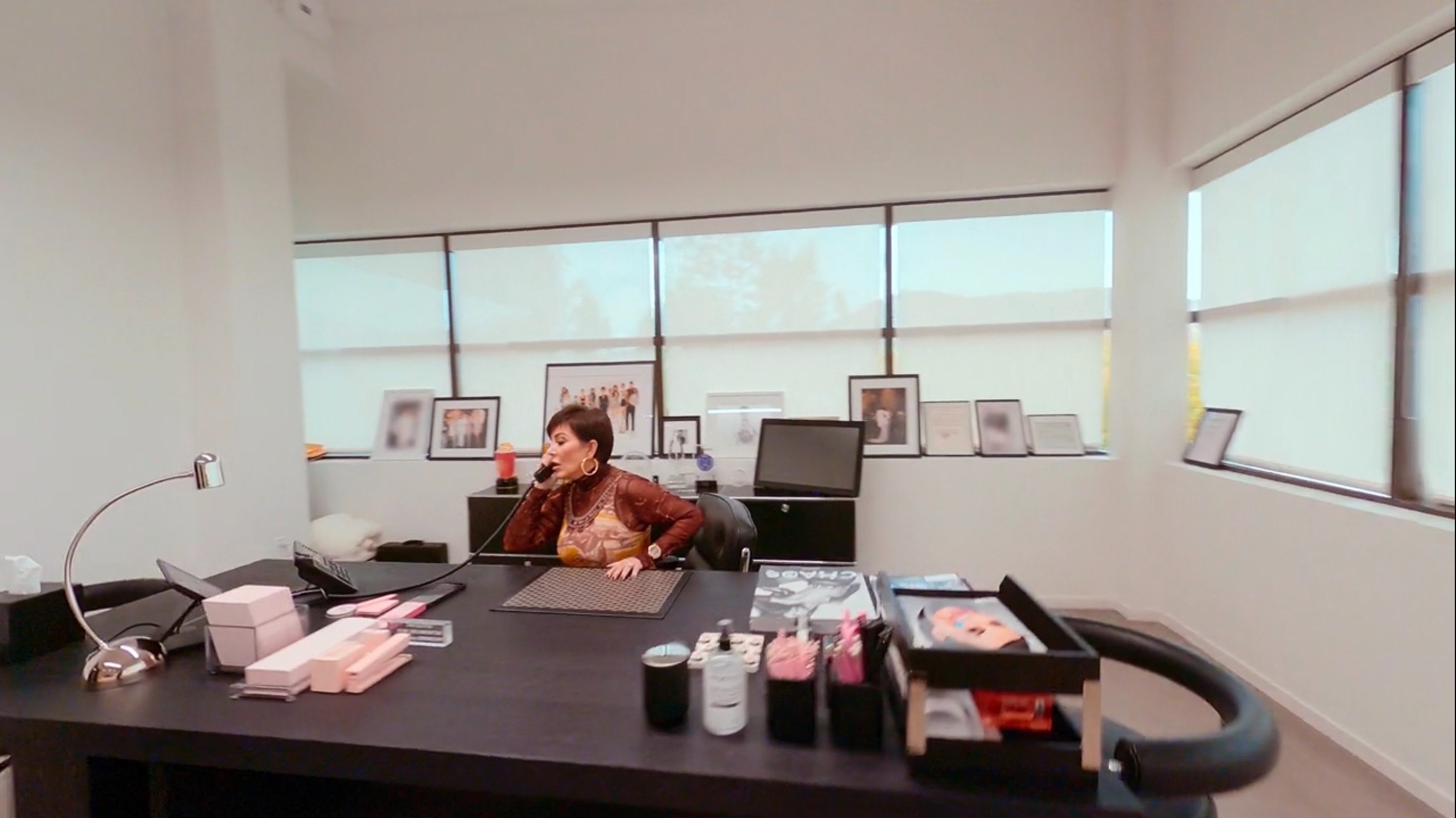 Mom Kris Jenner has her own office which appeared to have a ‘Kim crying’ stickerCredit: Hulu 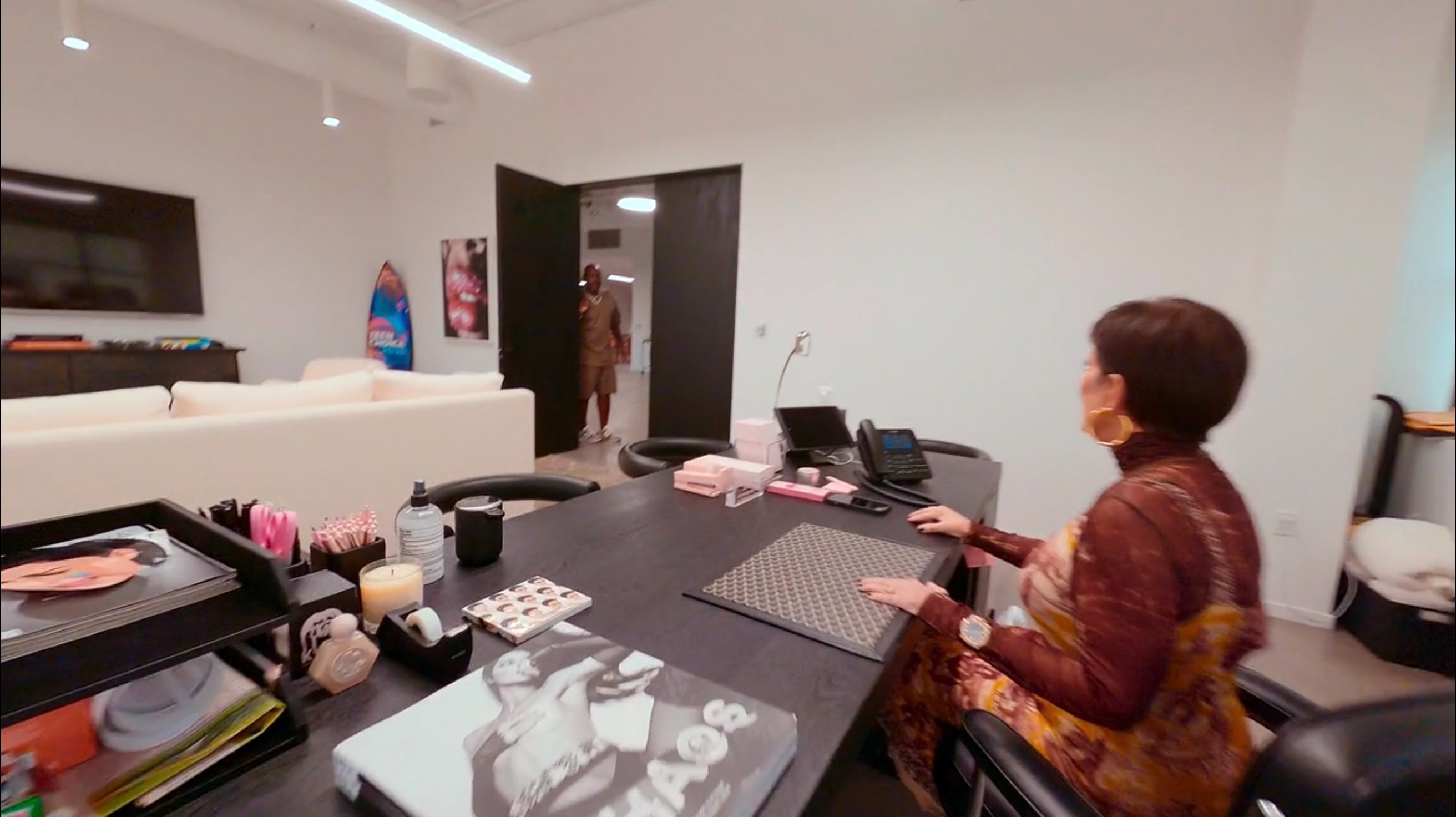 Kris’ office has its own couch, TV, and a Teen Choice Awards surfboard

“Kylie, we’re going to be late!” Kris yelled while holding a phone as her boyfriend Corey Gamble popped in.

To the left of Kris’ office, the business continued as a row of chic white cubicles could be seen with a “Kylie Skin” logo behind them.

Another 180-degree spin through a long hallway with photos of Kylie brought fans to a photography studio.

Lined in pink velvet ropes, a photoshoot appeared to be in session as the ‘SHE.E.O’ herself posed in a matching pink director’s chair.

As Kylie and Kris joined in exiting the building – and in all, it appeared to be a massive makeup mogul space.

Not shown was Kylie’s own office though it’s said to have a personal shower with water pressure once slammed as “weak” and “faulty” by Instagram fans.

Though she was accused of pumping up her assets for “years” by Forbes, Kylie Cosmetics slammed the unproven claims as “absolutely false.”

Either way, the office is stunning even if an exact valuation is a little hard to brush on.

And with every one of Kylie’s brands in mom Kris’ Instagram bio – not to mention her very own huge office – it’s no wonder fans think the youngest daughter is Kris’ “favorite.” 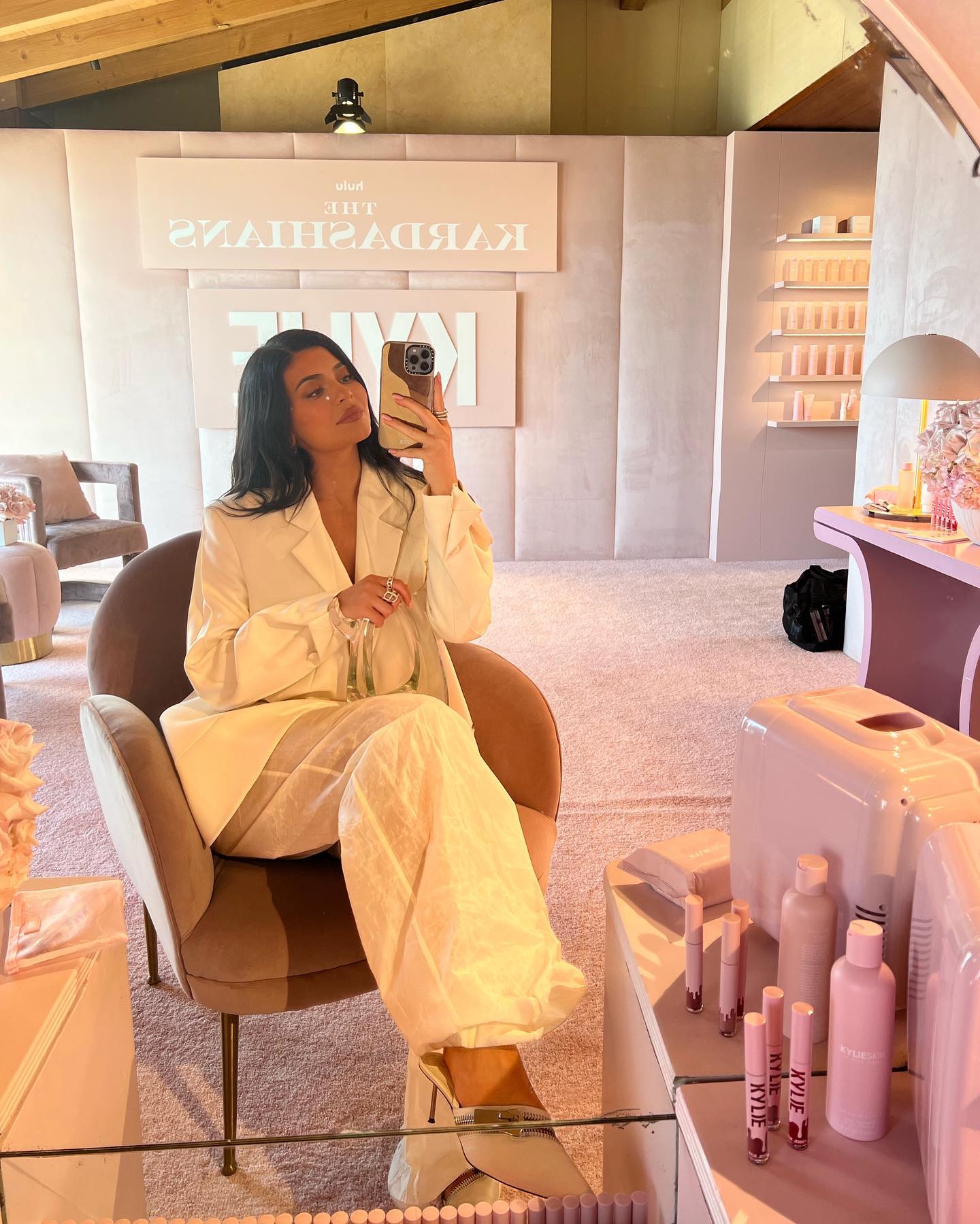 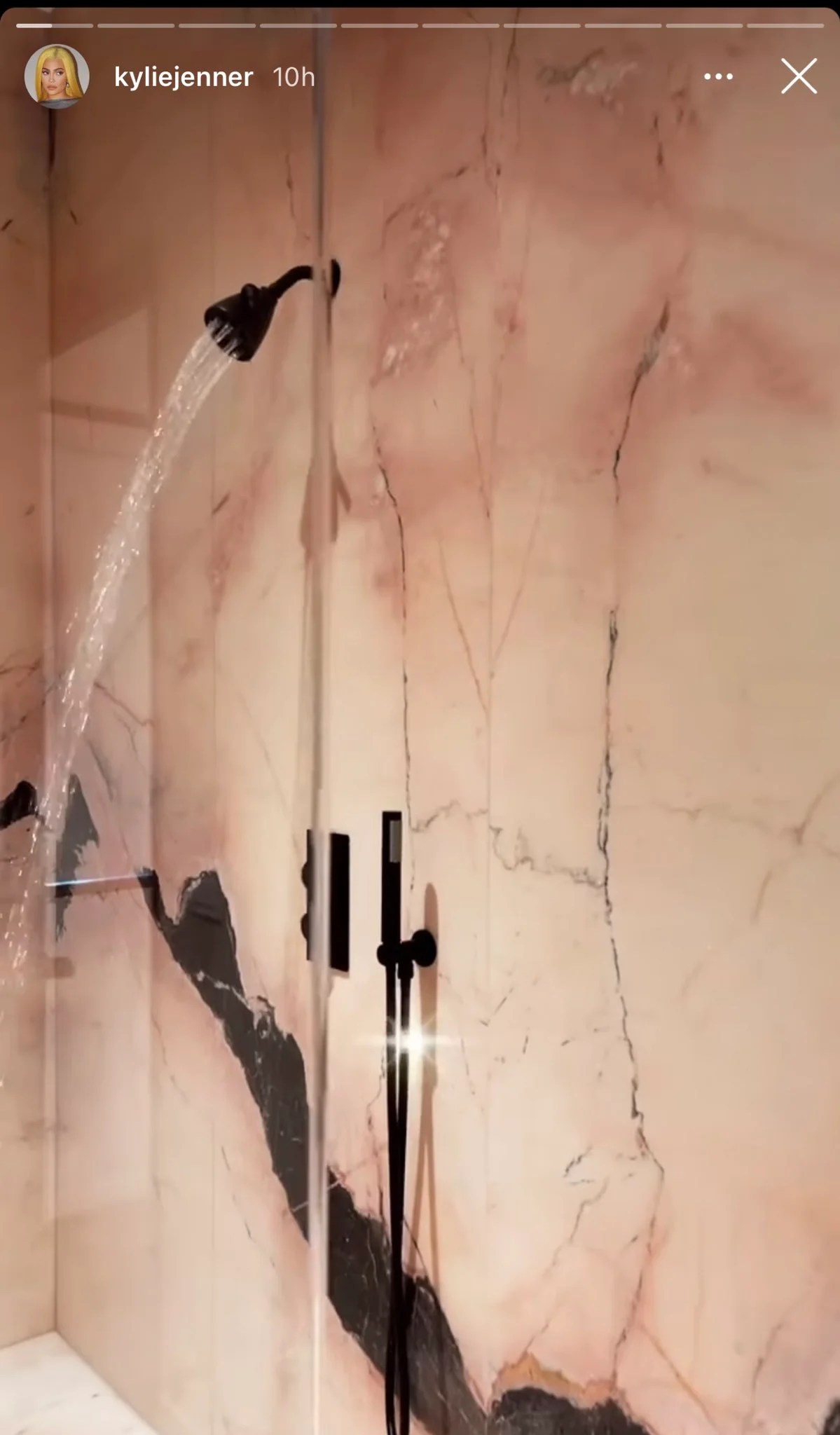 Not featured was her marble personal office shower once slammed by fans as ‘faulty’Credit: Instagram/KylieJenner 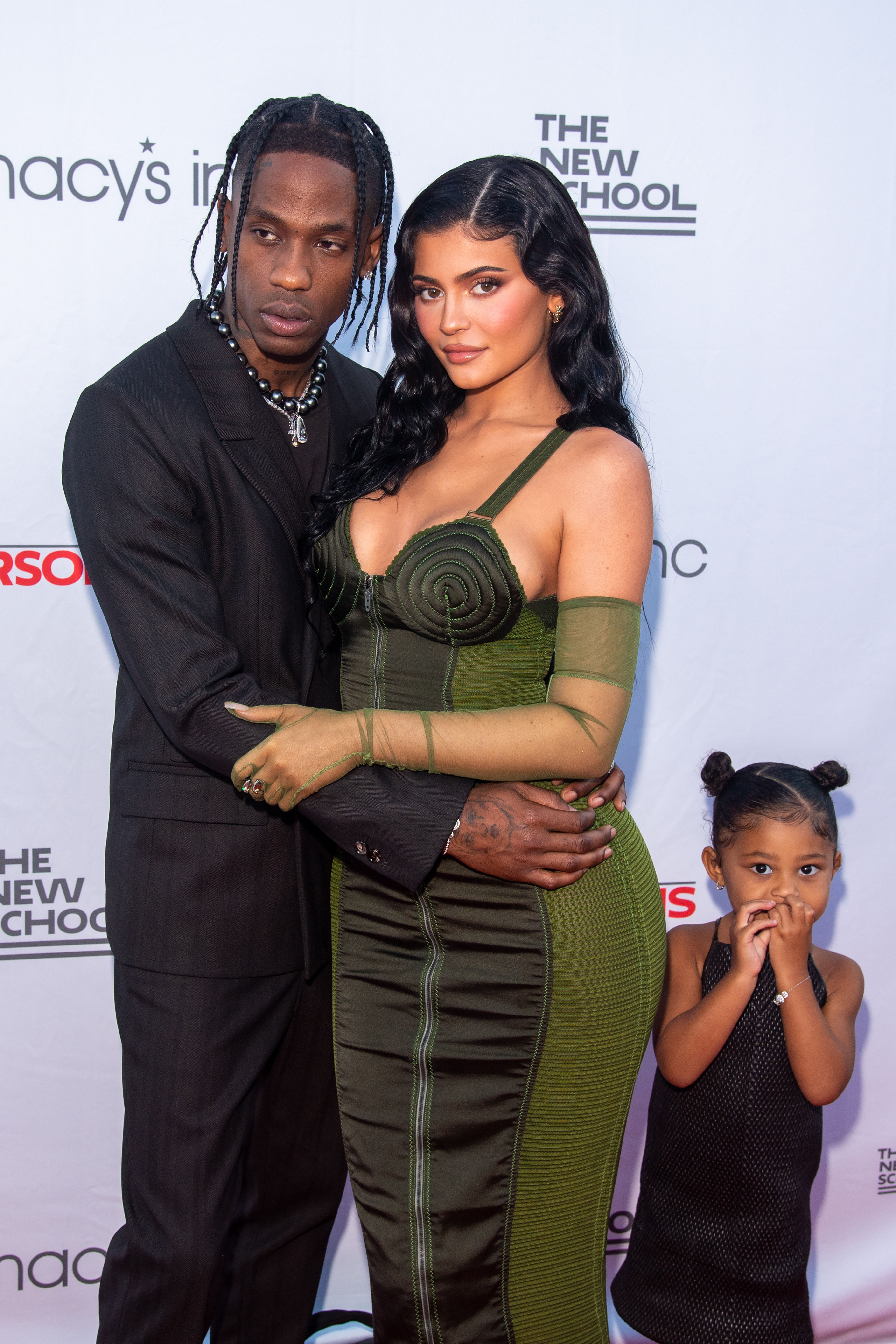 Kylie shares Stormi, 4, with Travis Scott as well as her newborn son who arrived in FebruaryCredit: Splash