Fans thought Issa and Lawrence were endgame, but sadly not (Picture:HBO)

Fans are preparing to say goodbye to Issa and the gang as the show is on its final season. However, so many questions need to be answered before we say farewell.

Are Issa and Lawrence going to get back together? Will Nathan make his feeling known to Issa? Will Kelli be getting her own spin-off?

Only time will tell.

The latest episode of Insecure saw Issa Dee’s new business venture, The BLOCC (Black Life Opportunity Connection and Culture) getting a lot of attention online – but it was clear to see that this was all a front to take her mind off Lawrence, after ending things for good.

Things are finally good between Issa and Molly

Episode two kicks off with scenes that transitioned between Issa and best friend Molly Carter in the prime of their careers, with Issa’s blog getting major attention online, as Molly continues to shine in the boardroom.

The comedic duo have put all the past shadiness behind them and their friendship is stronger than ever, and the timing couldn’t be more perfect as both parties were really going through it in the relationship department.

Molly gets back into the dating game

Molly did everything in her power to ignore her mother’s cheap digs over when she plans to settle down and have kids, as she was cruelly told: ‘By the time you’re married, your father will be in a wheelchair because he will be old.’ Yes Molly’s mum has no shame, but if you thought a bit of peer pressure was going to get the best of her, then you were right.

Molly found herself back in the dating game following her breakup with Andrew (Picture:HBO)

Issa struggles to get over Lawrence

Elsewhere, Issa continued to push new designs for Crenshawn, a local Black designer, but the brand bosses weren’t all that impressed and agreed for a minimal look, which didn’t sit well with Issa she but went along with it anyway, to Crenshawn’s annoyance.

Tensions ensued when the designer changed ideas at the very last minute, without Issa’s knowledge – a move that resulted in a heated exchange in which he branded her a ‘sell-out’. 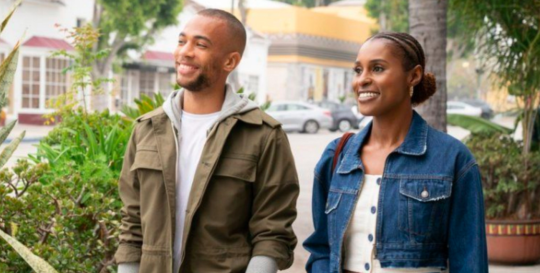 Issa turned to Nathan for support, however, Nathan had more on his mind (Picture:HBO)

Thankfully for all involved, the last-minute plan ended up working in Issa’s favour, giving her a hectic win – not that she seemed all that thrilled. She eventually asked Nathan, who has been trying to get with her forever, to spend the night.

However, when he made a move, the elephant in the room was finally addressed, and she broke down in tears, sobbing: ‘I thought I was ready.’

The sombre look on her face said it all as the credits rolled – but as her professional career soars, will she be able to sort out her private life?

The upcoming episode, Pressure Okay, is set to arrive next Tuesday, which will see Issa trying her hardest to imagine a life without Lawrence as Molly’s search for Mr. Right continues…