Lin-Manuel Miranda’s Tony Award-winning musical In The Heights is heading to the big screens this summer, and the new trailer is already getting fans in the mood for the cinematic event.

The hit Broadway show centered on a bodega owner who has mixed feelings after deciding to close his shop and move back to the Dominican Republic.

A vibrant story all about exploring the idea of what ‘home’ means, it became an instant hit the theater lovers and now it’s been brought to life for the rest of the world as a movie musical.

Directed by Crazy Rich Asians’ Jon Chu, the movie sees Hamilton star Anthony Ramos play Usnavi, a bodega owner with big dreams living in the predominantly Dominican Washington Heights neighborhood of Manhattan – and a secret love for the girl who works in the beauty salon next door.

Alongside Usnavi is his childhood friend Nina, who returns to Washington Heights from university with big news for her parents.

Unfolding over the course of three days, the musical drama follows the lives, struggles and relationship of this Hispanic-America comminuty. 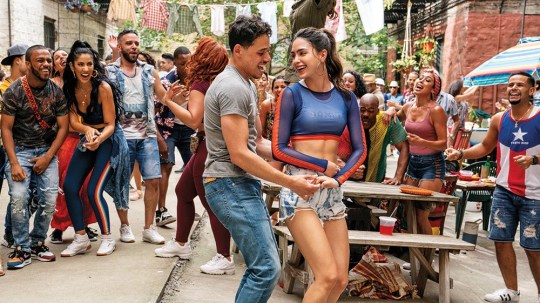 Lin-Manuel, who originated the role of Usnavi on stage, will instead portray Piraguero, the owner of a small piragua stand.

How many times is too many times to watch the new #InTheHeights trailers?
96,000? Â¡No me diga!

AND CHRIS JACKSON IS MR SOFTEE?!?! I wasnât ready.

The Warner Bros. adaptation of the play, penned by Quiara Alegria Hudes, was originally scheduled to debut last June.

However, it was postponed once the pandemic began to sweep the globe, halting film productions and shutting down cinemas.

Thankfully, the film will be out just in time to get the summer started this year instead.

In The Heights hits US theaters and HBO Max on June 18, while it released on June 25 in the UK.