Jimmy checked an item off his bucket list by taking part in a musical (Picture: Warner Bros. Pictures)

TV icon Jimmy Smits is not one to shy away from hard work, as he took on his first musical role in this summer’s joyful blockbuster release In The Heights, a film adaptation of the first show from Hamilton creator Lin-Manuel Miranda.

Jimmy is probably best known to audiences for his early work in LA Law and character arc as presidential nominee Matt Santos in the final two seasons of The West Wing – but he was ready to tick off an item on his bucket list when he joined the cast of In The Heights.

Speaking to Metro.co.uk, he said: ‘For any actor I was able to kind of check off that box on the bucket list of being able do something like this.’

He was also modest in his singing success, laughingly joking that ‘luckily it wasn’t heavy lifting for me’ in his role as business owner and proud father to his Stanford University-attendee daughter Nina, Kevin Rosario.

He continued: ‘The way our film is constructed, there was just enough there to keep me on the reel!’

But regardless, Jimmy was ready to do the prep, including eight to 10 weeks of choreography pre-shooting for the cast and the big production numbers, and his own individual work. 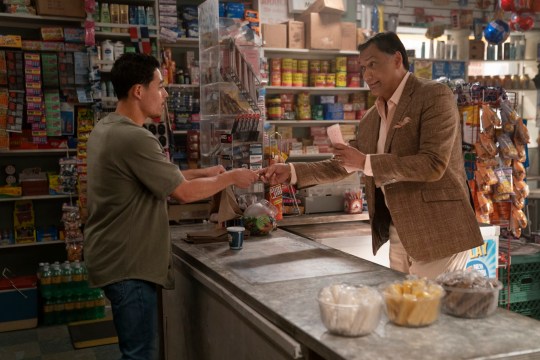 And fear not, Jimmy fans – he might not have big solos, but the actor has plenty of drama to grapple with during the film.

The Rogue One star also reflected on the importance of seeing and feeling representation among the cast, referring to the dancing cast ‘that ranges in sizes and shapes and colours’.

‘It’s the vibrancy of our community and [the film] displayed that on so many levels. So it checked off more than one box for me on my bucket list.’ 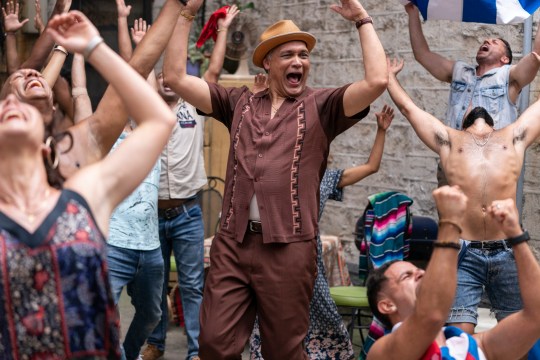 Jimmy pointed to the vibrancy of the community being reflected on screen (Picture: Macall Polay/Warner Bros. Pictures)

Chatting about his time filming major number 96,000 on location at a swimming pool, he remembered: ‘The energy was high, we had 500 plus extras on set – the majority of them from Washington Heights themselves – so there’s an authenticity to that.’

Describing the song as a ‘great homage to those old-school grand MGM musicals’ (eat your heart out, musical mermaid Esther Williams), the 16-year-old did admit to the slightly less glamorous side of filming.

‘We had to fill up the pool ourselves and unfortunately it was raining for those three days – the weather was not on our side – but we pushed through it.’

Although Gregory had to be in the pool for ‘two to three hours straight’ at a time, he was happy to have director John M. Chu in there with him, which ‘brought this amazing sense of comfort’, as well as (he agreed) a shared sense of suffering. 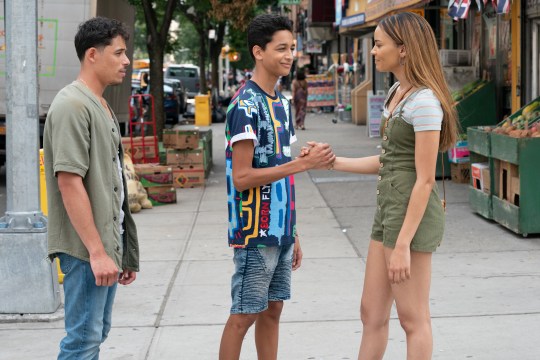 Gregory with his co-stars, Anthony Ramos (Usnavi) on the left and Leslie Grace (Nina) on the right (Picture: Macall Polay/Warner Bros. Pictures)

‘It was an amazing experience.’

Olga Merediz was singular among the cast in that she had originated her part – the role of Washington Heights’ loving matriarch Abuela Claudia – on Broadway from 2008, and was returning to it over a decade later.

Discussing her approach in revisiting the role, she explained: ‘I had to kind of go back, because as an artist you do something and you just close the chapter and move on.

‘So I was desperately looking at my old scripts – trying to find them in my apartment, and my music, and see what the notes I written down – to try and capture her again.

‘And then of course she came right back to me.’

Olga also noted the ‘many differences’ in performing the part as a screen role, going from ‘eight shows a week and a lot of energy’ to a cinematic approach, which also doesn’t allow for in-sequence shooting. 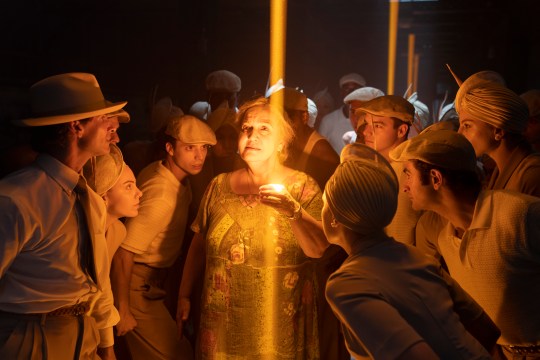 Olga in character, in a role she first played in 2008 (Picture: Macall Polay/Warner Bros. Pictures)

‘Here everything is very internal and the camera is right there so you just have to do everything inside, but still with those big feelings.

But Olga was another to sing the praises of Chu, adding: ‘He just opened it up and supported me, and it’s a whole new experience.’

In The Heights is out June 18.