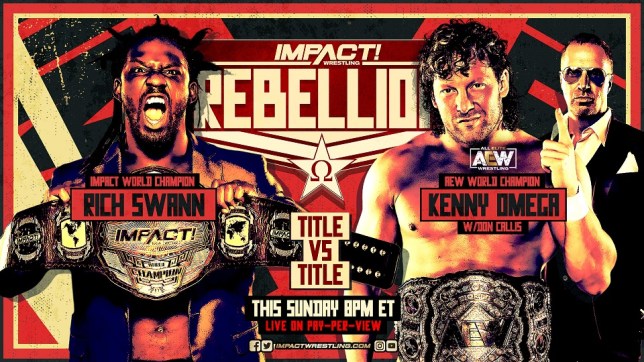 History will be made this weekend (Picture: IMPACT Wrestling)

History will be made at Rebellion as IMPACT Wrestling and AEW collide in a main event with unfathomable stakes.

Even in this whacky world, the idea of two major US promotions colliding in this way – with so much on the line – is largely unthinkable, but the night has finally arrived.

Even away from Rich Swann and Kenny Omega’s highly anticipated match, there is a lot to get excited about with IMPACT once again delivering what is, on paper, a card full of bouts sure to deliver.

The potential for the rest of the show – including a further four championship clashes, best friends colliding and what promises to be a brutal Last Man Standing match – shouldn’t be understated.

That said, it’s hard to get away from that main event, which also sees the pro wrestling return of veteran sports broadcaster Mauro Ranallo as the former NXT commentator is set to call Omega vs. Swann.

When is IMPACT Wrestling Rebellion 2021?

IMPACT Wrestling Rebellion takes place on tonight (Sunday, April 26) with all the action on the main card kicking off at 1am for fans in the UK.

How can you watch IMPACT Wrestling Rebellion 2021?

For fans in the UK, IMPACT Wrestling Rebellion is available to order via both Fite TV and on traditional pay-per-view on Virgin Media.

Mauro Ranallo returns for Rich Swan vs. Kenny Omega: What to expect from IMPACT Wrestling Rebellion 2021

It’s important to reiterate that Rebellion is far from a one match show, with a full card packed with talented performers across IMPACT Wrestling’s strong roster all set to impress.

However, it also can’t be denied that all eyes are on the inter-promotional main event pitting IMPACT against AEW, Kenny Omega versus Rich Swann – winner takes all.

Despite coming from two separate companies, on two different networks, the two wrestlers will collide with their respective world titles on the line with the victory walking away with both championships.

From an in-ring standpoint, fans can expect a quality bout, and the presence of Mauro Ranallo on commentary only adds to the big fight feel. 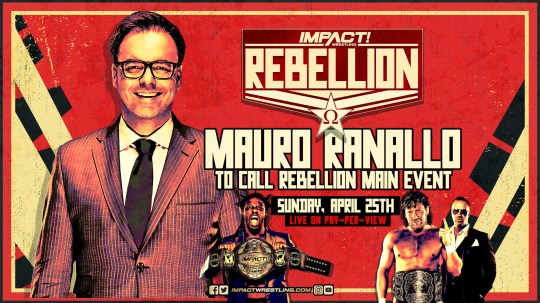 Fans are excited to have Mauro back on pro wrestling commentary (Picture: IMPACT Wrestling)

In terms of a winner, belt collector Omega – with Don Callis by his side – has to the the favourite to take home all the gold.

We already know that whoever wins will be appearing on both shows to defend the titles, and seeing IMPACT and AEW stick to that for a while would be a breath of fresh air.

Assuming there are no shenanigans (which would be a massive mistake after this much hype), Omega getting the W and being a regular presence on Thursday nights for a while is an exciting prospect.

An upset with Swann doubling up on Wednesday nights seems unlikely but would take the already memorable moment to a whole other level.

The only bit of disappointment going into this match is how little AEW have done to promote it on their weekly TV shows, which is a massive understatement.

Hopefully, the result has more significance to AEW than the build itself, because this is a big moment deserving of far more hype on Dynamite.