Although he cracked the UK Top 10 with his last album of warm and melodic country rock, 2019’s ‘Reckless & Me’, Kiefer Sutherland is under no illusions about how people perceive him. “Oh, I’ll be an actor to the death,” says the star of enduringly popular movies including The Lost Boys, Stand By Me and Flatliners – not to mention the game-changing US action series 24, which originally ran from 2001 to 2010.

As for the collective cynicism that greets any famous actor launching a singing career, Sutherland says bluntly: “You’ll never overcome it.”

Speaking on Zoom from his home in LA, where he says it’s so “rainy and overcast” that “it almost feels like London”, the 55-year-old Emmy and Golden Globe winner (both for 24) is a calm and considered presence. Throughout our 45-minute interview, he makes no attempt to gloss over uncomfortable truths the way some Hollywood stars might be tempted to.

“I’ll be an actor to the death”

In his opinion, this cynicism simply reflects the fact that some actors-turned-singers “just aren’t good”. “Look,” he continues, “there’s also a lot of musicians that have tried to work as actors and some of them really aren’t good. But I think Frank Sinatra got a bad end of the stick with this, because he was an extraordinary actor and his work in [Oscar-winning 1953 film] From Here to Eternity was really, really special.”

Sutherland says he’s “sure there’s a very rational, logical explanation for why people want [artists] to stay in their lane”. But for him, music has become much more than a hobby. On Friday (January 21), he released ‘Bloor Street’, his third album. It’s named after the main thoroughfare through Toronto, a place where as a teenager he had his first job, first kiss and first impromptu gig – “playing guitar for loose change on the corner”.

Since then, Sutherland has certainly earned his live stripes. He estimates that between 2016 and 2019, during the parts of the year when he wasn’t working on his hit TV series Designated Survivor, he and his band played around 500 gigs. “The truth is, I didn’t expect to like playing live as much as I have,” he says. “I didn’t expect to be frightened by it the way I was, and I certainly didn’t expect to experience the generosity that I received from audiences in the earlier days.”

When Sutherland first began gigging – around 15 years ago, nearly a decade before he released his 2016 debut album ‘Down in a Hole’ – he was so frightened that his hands would visibly shake. “As an actor, you just put your hands in your pockets, right? And then no one knows,” he says. “But as a guitar player, that doesn’t work. So it was just like ‘bang, bang, bang [on the fretboard]’. Fucking awful. I remember seeing one guy laughing and thinking: ‘You have every right to laugh’. But that same guy also said: ‘Come on, you’re gonna get through it.’ And I did get through it. And then I booked more shows.” 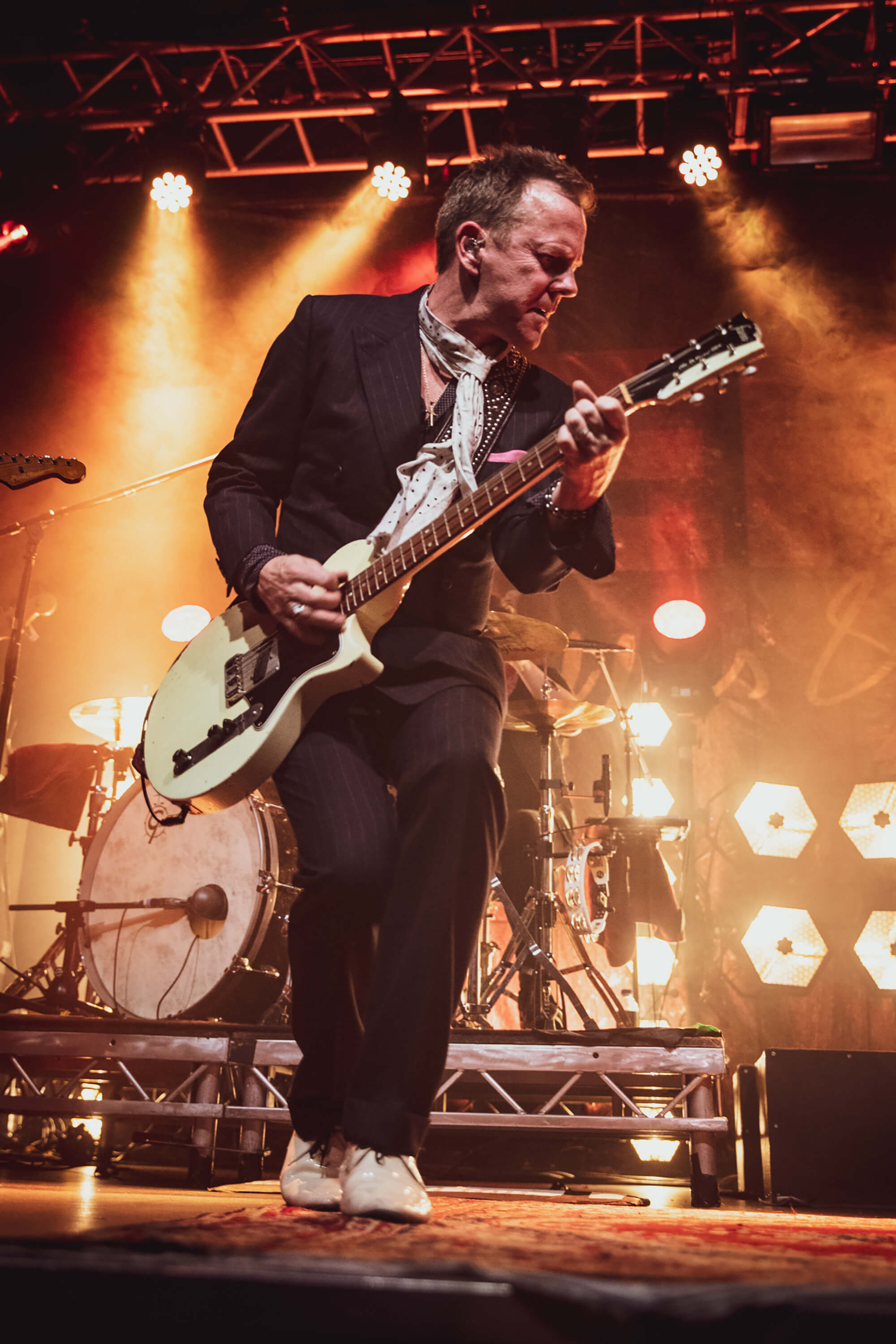 Sutherland is equally candid when it comes to discussing ‘County Jail Gate’, a poignant highlight from his new album. “Once you’re inside, there’s no place to hide/And you’re left to your wits and your fate,” he sings. “And there ain’t no sound I’ve learned more to hate/Than the sound of the county jail gate.”

Though the song isn’t strictly autobiographical, Sutherland says it’s very much rooted in his own story. “I stole a car when I was about 14 years old, so I wasn’t 12 [like in the song], but that was mine,” he says. “The longest I’ve ever gone to jail for was three months. [Whereas] clearly the person in the song is there for a long time. But the humility, the embarrassment and the sheer waste of time, yeah, that’s all mine.”

In 2007 – a year 24 achieved some of its best ratings – Sutherland was sentenced to 48 days in jail for driving under the influence of alcohol. “I don’t know what it’s like in the UK, but county jail in the US is not a great place – it’s not a safe place,” he says. “And they’ve got too much to worry about to actually take you into consideration. And I knew for a fact, during my time there, that I was a giant nuisance to the sheriff’s department [because they] had to make sure something didn’t happen to me.

“County jail is not a safe place”

County jails are typically used to detain prisoners serving shorter sentences, or people convicted of more serious crimes who are waiting to be transferred. “They’re overcrowded and they’re dangerous,” Sutherland says. “And [the officers] can’t even split up gang affiliations because they don’t know who’s who yet. This isn’t like prison, this is kind of a warehouse. In a way, prison is a refined experience compared to county jail.”

Sutherland says that for him, the worst part of doing time was “knowing I’ve done it more than once”. He now has three birds tattooed on his right arm to represent each of his stints behind bars. “But gosh, it’s been 15 to 16 years since the last thing like that ever happened to me,” he says with a sigh. “And at some point you can only beat yourself up so much before it starts to become counter-intuitive and kind of self-destructive. So really, I think the song was an interesting way for me to put it to rest.”

Sutherland speaks about his jail time with palpable regret, but also with a kind of wry wisdom. He says he spent his longest prison sentence, the one that lasted three months, quitting tobacco cold turkey. “I told myself: ‘If you get anything out of this, give up smoking – do not light up a cigarette when you walk out that gate,’” he says with a laugh. “And then I didn’t even make it to the fucking truck!”

Kiefer, son of acting legends Donald Sutherland and Shirley Douglas, is just as humble when the conversation turns to his pre-24 career lull. He began his career in the mid-’80s with an impressive opening run. A year after he appeared in 1986’s revered coming-of-age movie Stand by Me, he starred in teen vampire comedy The Lost Boys, which has become a cult classic. Sutherland credits director Joel Schumacher with giving The Lost Boys a “style that is reckless and free and checks off all the boxes.”

“And it’s young,” he adds. “It’s feasible that if you’re 10 or 11, this is the first horror film that your parents might let you watch. There are some films that make you feel part of the game – and The Lost Boys was one of those, though I had no idea about that when I was making it.” 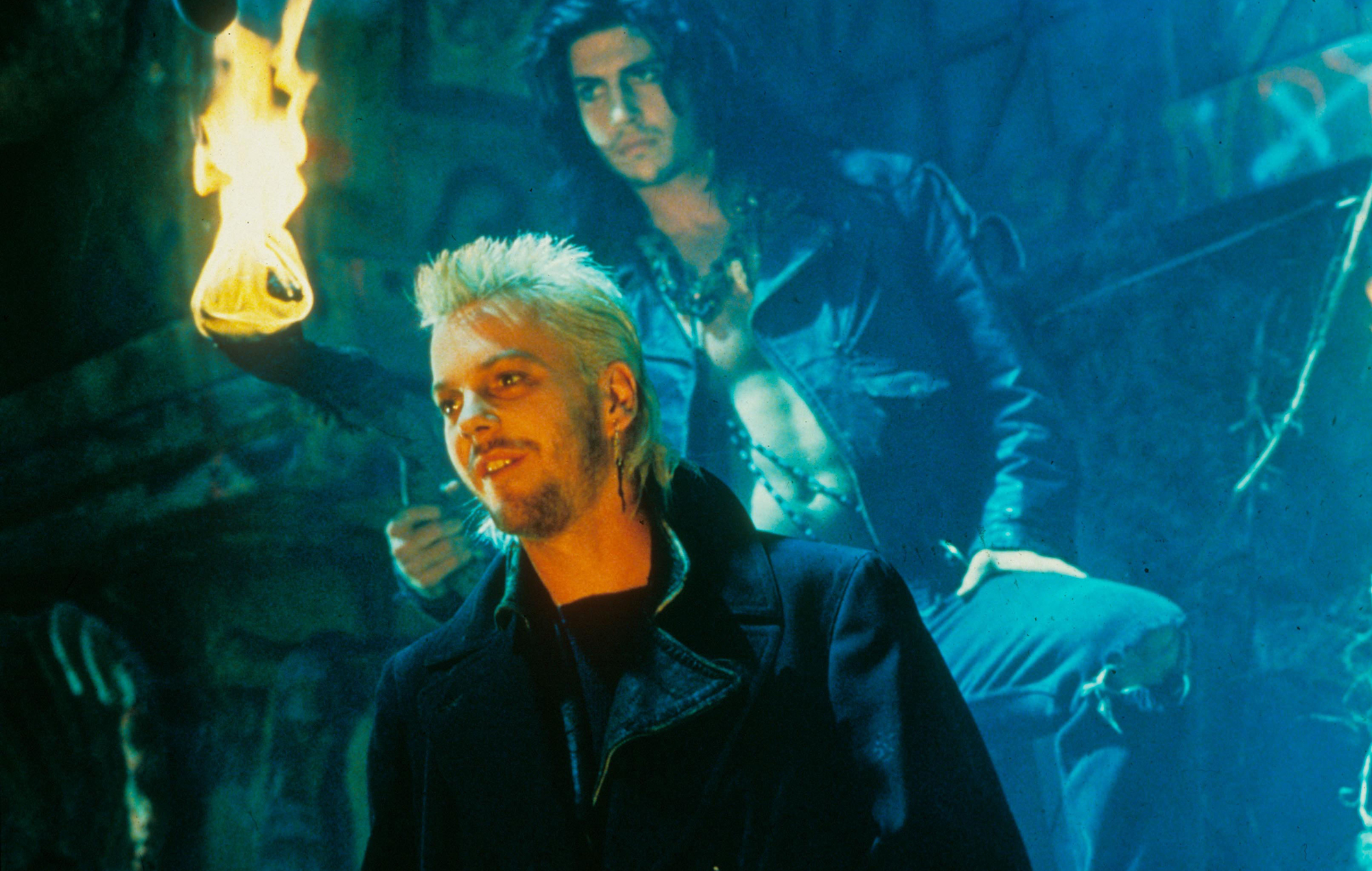 But a few years later, Sutherland’s career didn’t so much flatline as take a slow nosedive. “I had a hell of a start, and then I got to 30 and it just kind of stopped,” he says today. “It wasn’t even anything I did. It was just that directors want to work with someone new, and audiences want to see someone new – it’s part of the business, and I didn’t take it personally.” During this relatively thin period, Sutherland says he “wasn’t working as much, and certainly not on stuff that people were actually seeing.”

Sutherland’s comeback came in 2001 when he was cast in 24. For the next decade, this innovative thriller series followed his character, the eternally beleaguered Federal Agent Jack Bauer, in real time across 24 hour-long episodes per season. “The show hadn’t been out for more than a month and I remember opening the paper one day and seeing this huge article saying ‘Back from the Dead for Sutherland,’” he recalls. “And I remember thinking: ‘Well, it wasn’t that bad.’ But apparently it was, and yeah, I could feel the change. It was like night and day.” 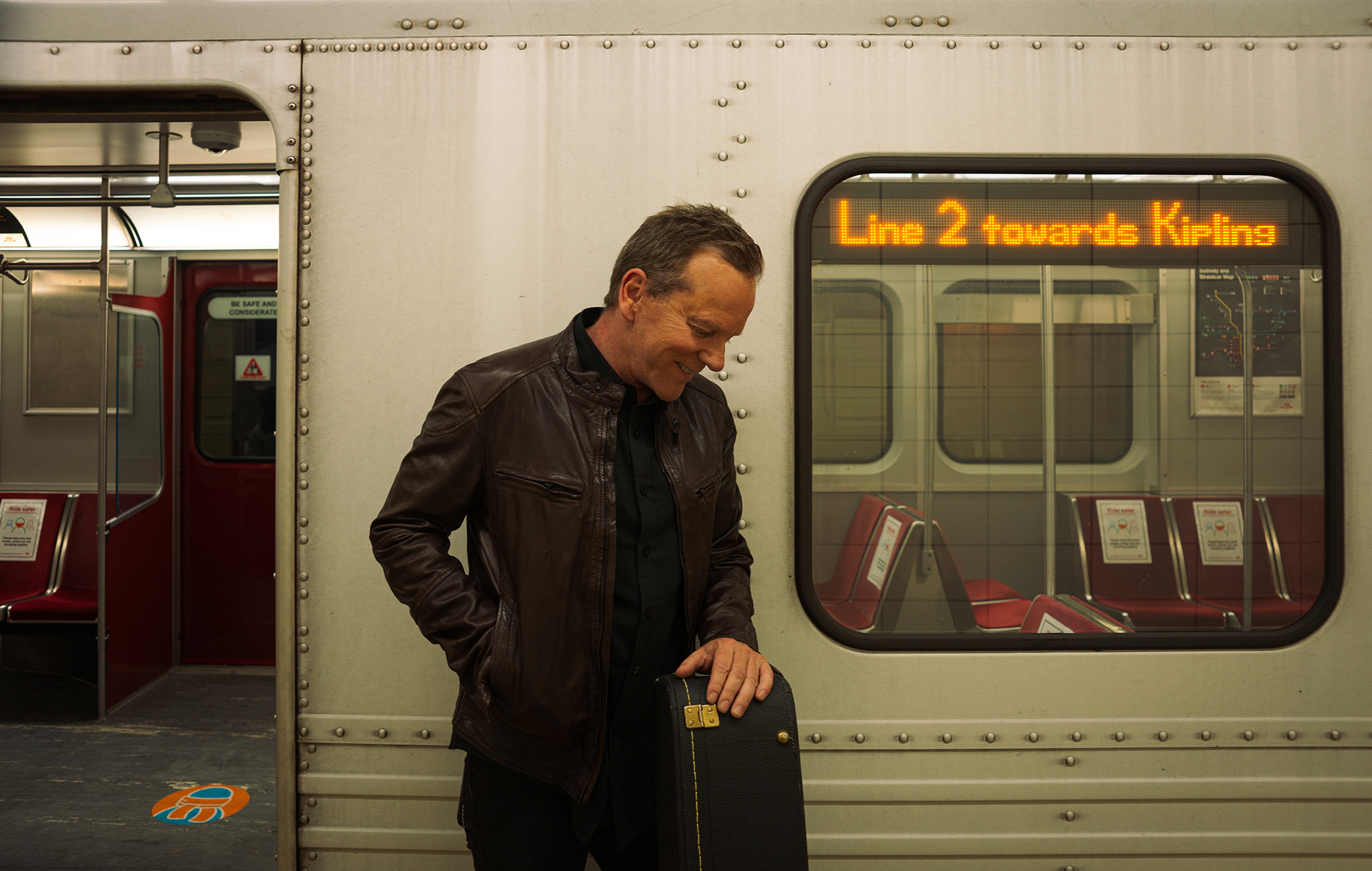 Sutherland points out proudly that 24 remains the last show made for one of the “Big Four” US networks – as opposed to Netflix or a cooler cable network like HBO – to win Outstanding Drama Series at the Emmys. It also became the longest-running espionage or counterterrorism-themed TV series in history. “I’ve got a picture of my daughter from season one – she’s 12 years old,” he recalls. “And I’ve got a picture of her from when we were finishing and she’s graduated from NYU [New York University]. It’s just a huge part of my life.”

Though 24 ended in 2011, Sutherland returned as Jack Bauer three years later in the 12-episode event series 24: Live Another Day. He also served as an executive producer on the short-lived spin-off series, 24: Legacy, which was axed in 2017 after just one season. His character didn’t feature in the spin-off, which instead centred on a war hero played by Straight Outta Compton star Corey Hawkins. “I really felt for the cast,” Sutherland says, before suggesting the spin-off wasn’t given enough time to bed in.

“We grew into the show – we figured out how to make it together, and it was slow,” he says. “But all of a sudden, you’re asking these [new cast members] to figure it out in a week.” Sutherland says he never felt “any barrier” between him and 24‘s writing team – they could discuss the mechanics of a scene at any point. “Whereas they did [on the spin-off],” he says, “because actors are naturally really respectful of writers. And so there were a lot of things that I felt were kind of just circumstantially unfair for that reboot.”

But what of 24‘s future? In September, a Fox network boss said that “active creative discussions” about another revival series were underway. Today, Sutherland denies any knowledge of this, saying: “My social media will just start going off the charts, and it’ll be the first I’ve heard of it.” However, he admits that the subject comes up when he meets former showrunner Howard Gordon for a beer. “I think the only thing that would ever make sense – and I’ve told [Gordon] this – is that you launch the new cast because they’re trying to get me back from China or wherever the hell it is that I ended up,” he says.

In fairness, Sutherland is hardly starved for acting work. He’s “absolutely thrilled” to have portrayed Franklin D. Roosevelt, the 32nd President, opposite Gillian Anderson’s Eleanor in The First Lady, out later this year. “I’d never played a historical figure before,” he says. “So the challenge of creating a character so well-known in terms of his voice and physicality was really exciting for me”. Then in May, he’s due to shoot another new series, currently untitled, in which he plays a private spy trapped in what’s being billed as a “paranoid thriller”. 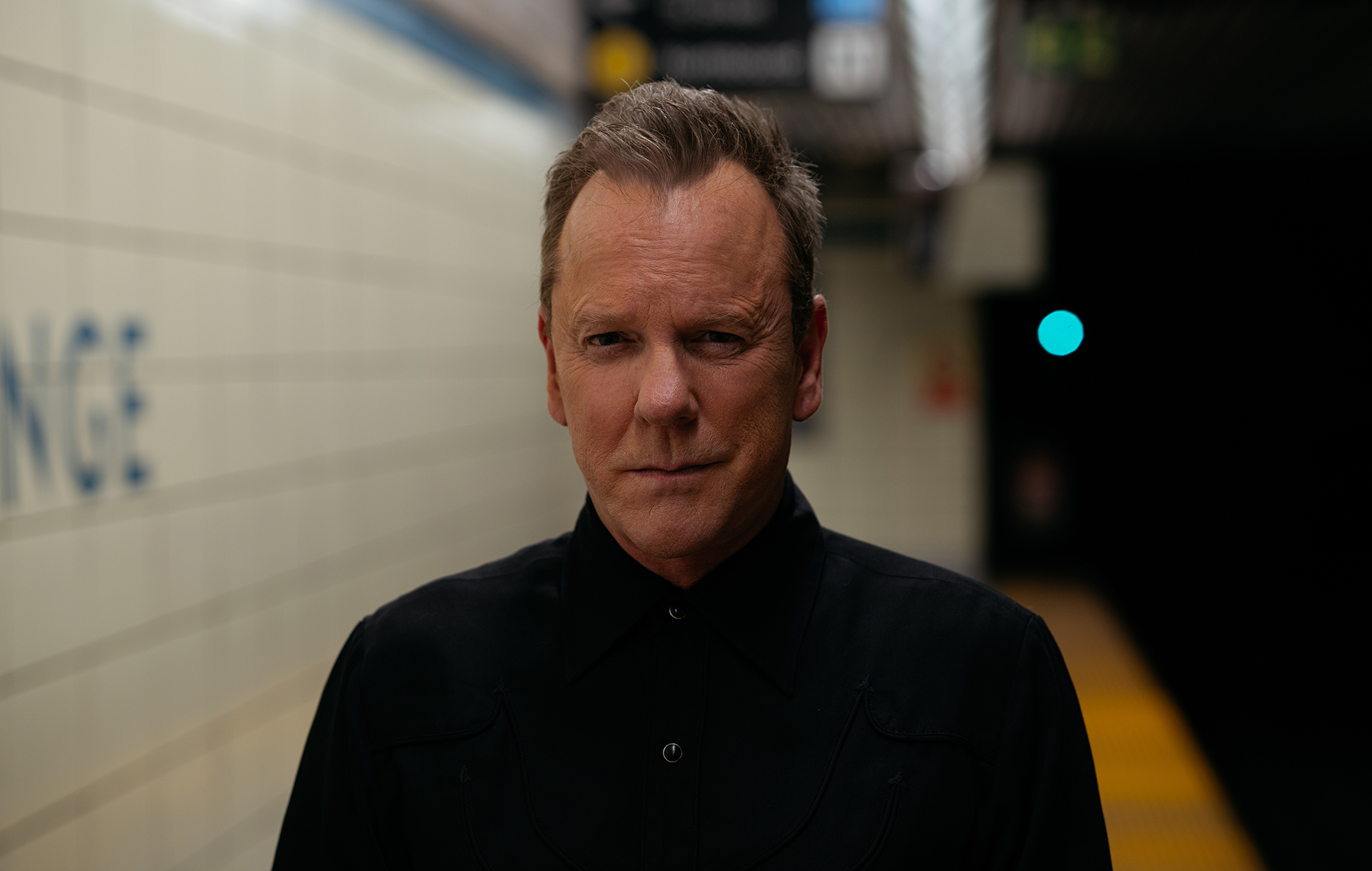 It already sounds like classic Sutherland, but he says the series reflects the way TV has evolved over the last decade. “We’re doing eight episodes – and when I suggested a round 10, they said no,” he explains. “Because writers can tell a better story in eight episodes. How they did 24 [episodes] on 24 is a miraculous thing.” Sutherland is a little more modest when pressed to name his own accomplishments. “I’ve been lucky enough to have ridden my way through those ups and downs,” he says after a pause. “Just the fact that I’m still here – yeah, I’m proud of that.”

Sutherland takes a similar worldly-wise approach to his music career, which is perhaps why he comes across like a bit of a rock and roll survivor after only three albums. “It’s really as simple as writing songs, working a lot with the band you like playing with, playing those songs live, and keeping going down the road,” he says. And at this stage, Sutherland must feel confident that he can overcome any bumps, big or small, along the way.