I’M A Celebrity’s Beverley Callard is definitely vegan and is being provided with special food in camp, her daughter has revealed.

Danielle Callard is looking after her mum’s social media accounts while she’s in Gwrych Castle, and last night took part in a fan Q&A. 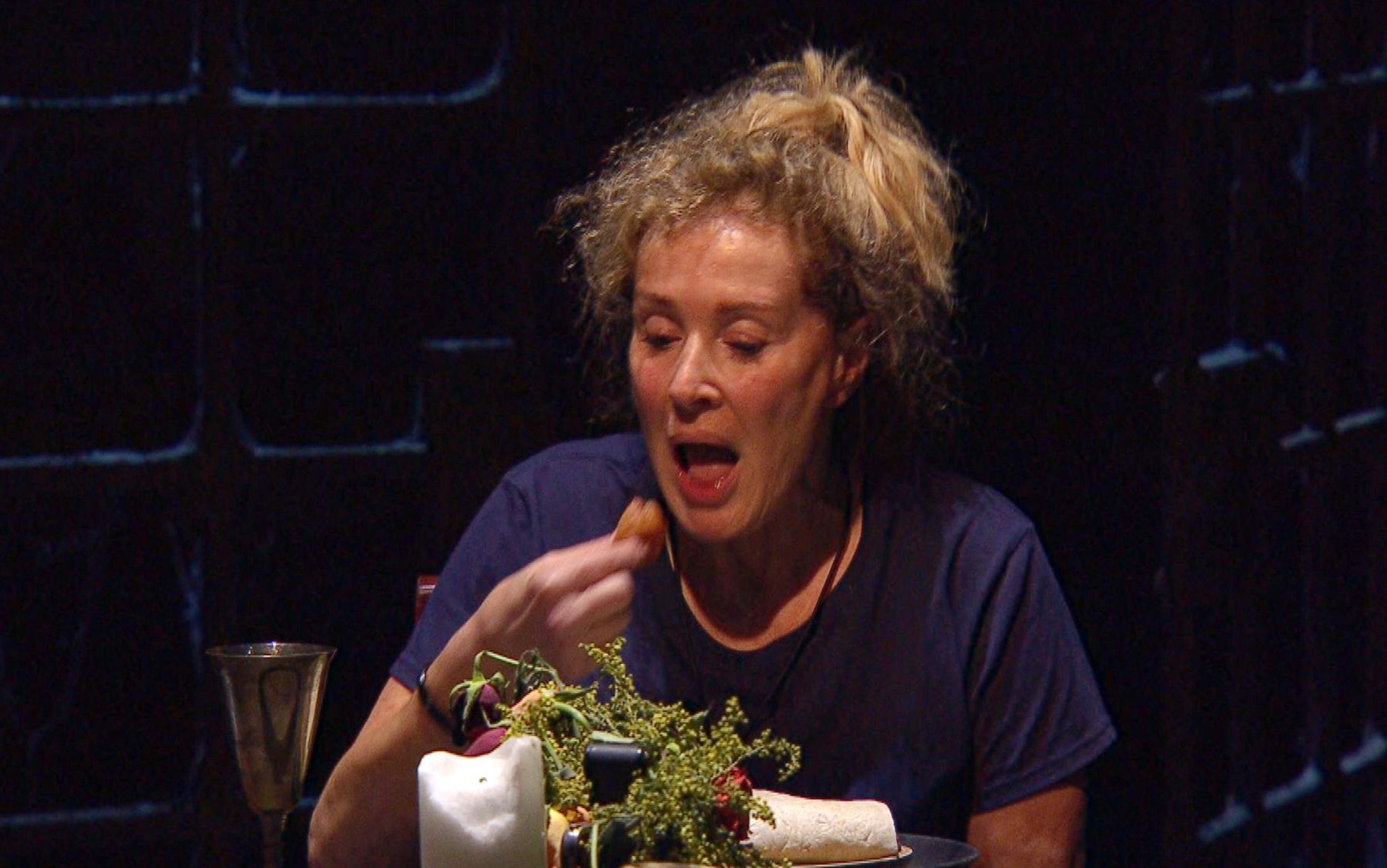 I’m A Celebrity star is definitely vegan, her daughter has saidCredit: Rex Features

One fan referenced the moment Beverley tucked into a Castle Coin Challenge reward that left some doubting her vegan credentials.

They asked: “How are you eating scotch eggs if you are vegan?”

Danielle replied: “Beverley will be getting vegan substitutes to what the others have.” 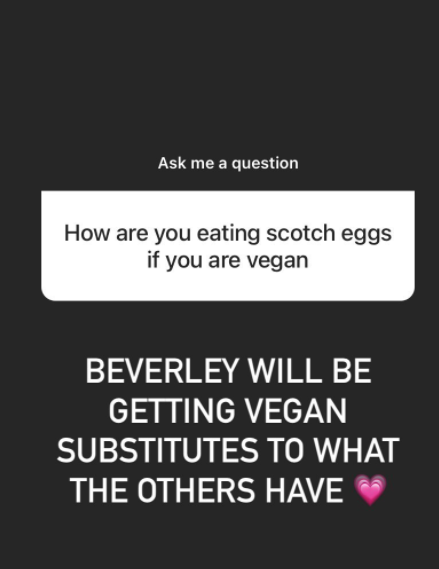 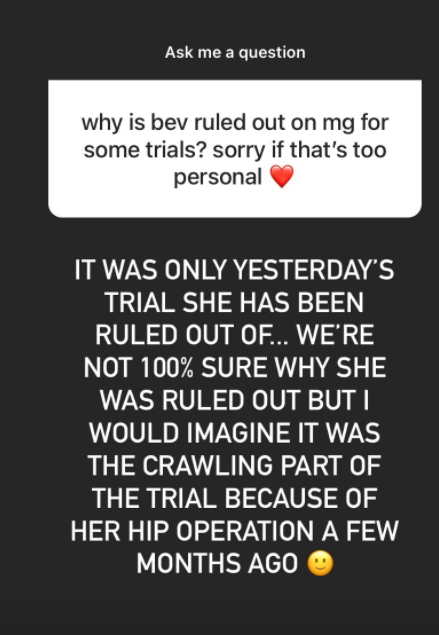 Danielle was happy to answer all questions

Another fan questioned why Beverley was ruled out of a trial on medical grounds earlier this week.

Danielle said: “We’re not 100 per cent sure why she was ruled out but I would imagine it was the crawling part of the trial because of her hip operation a few months ago.”

Hosts Ant and Dec have also stepped in to defend Beverley after Scotch egg furore. 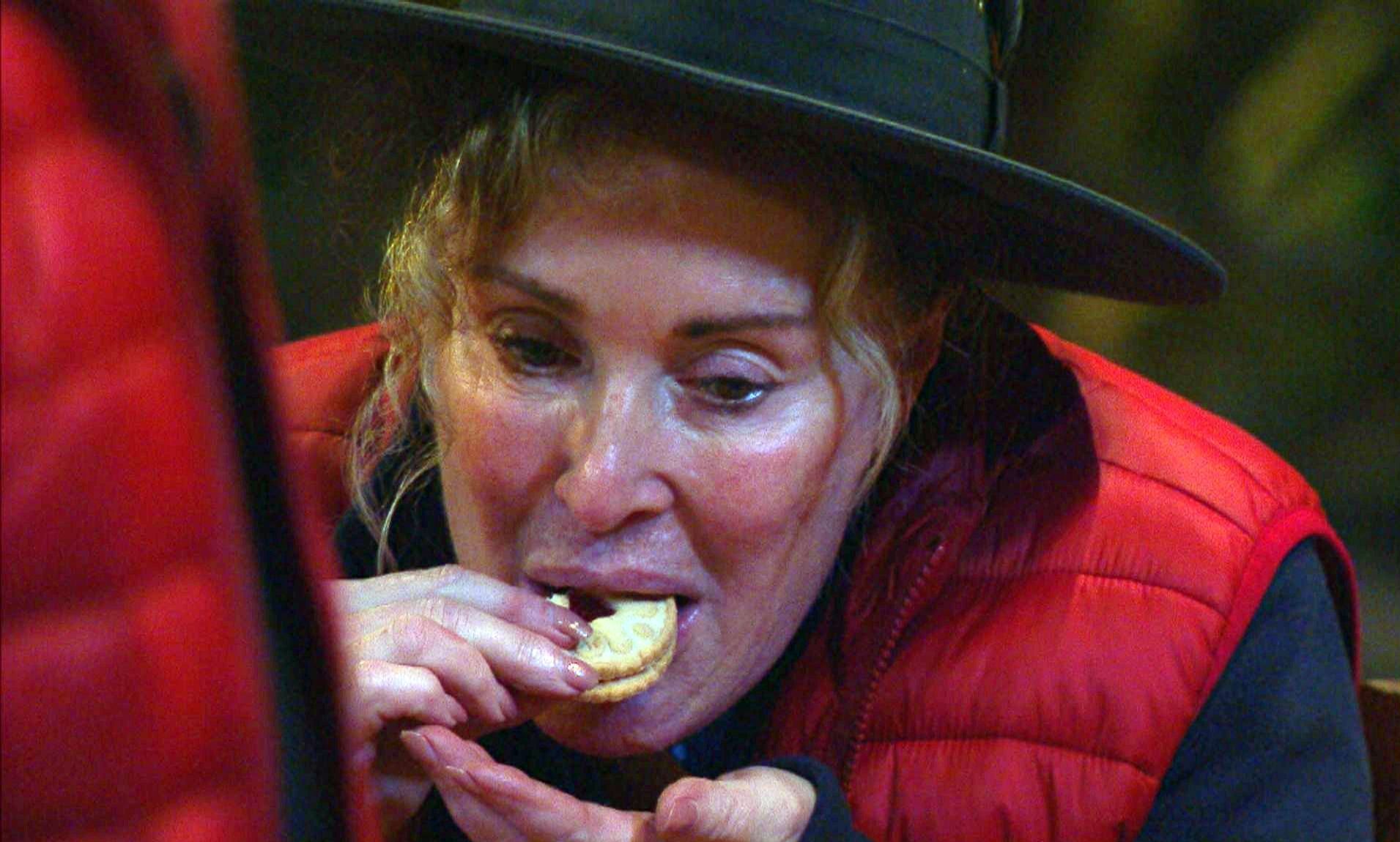 Beverley tucked into a Jammy Dodger the other dayCredit: Rex Features 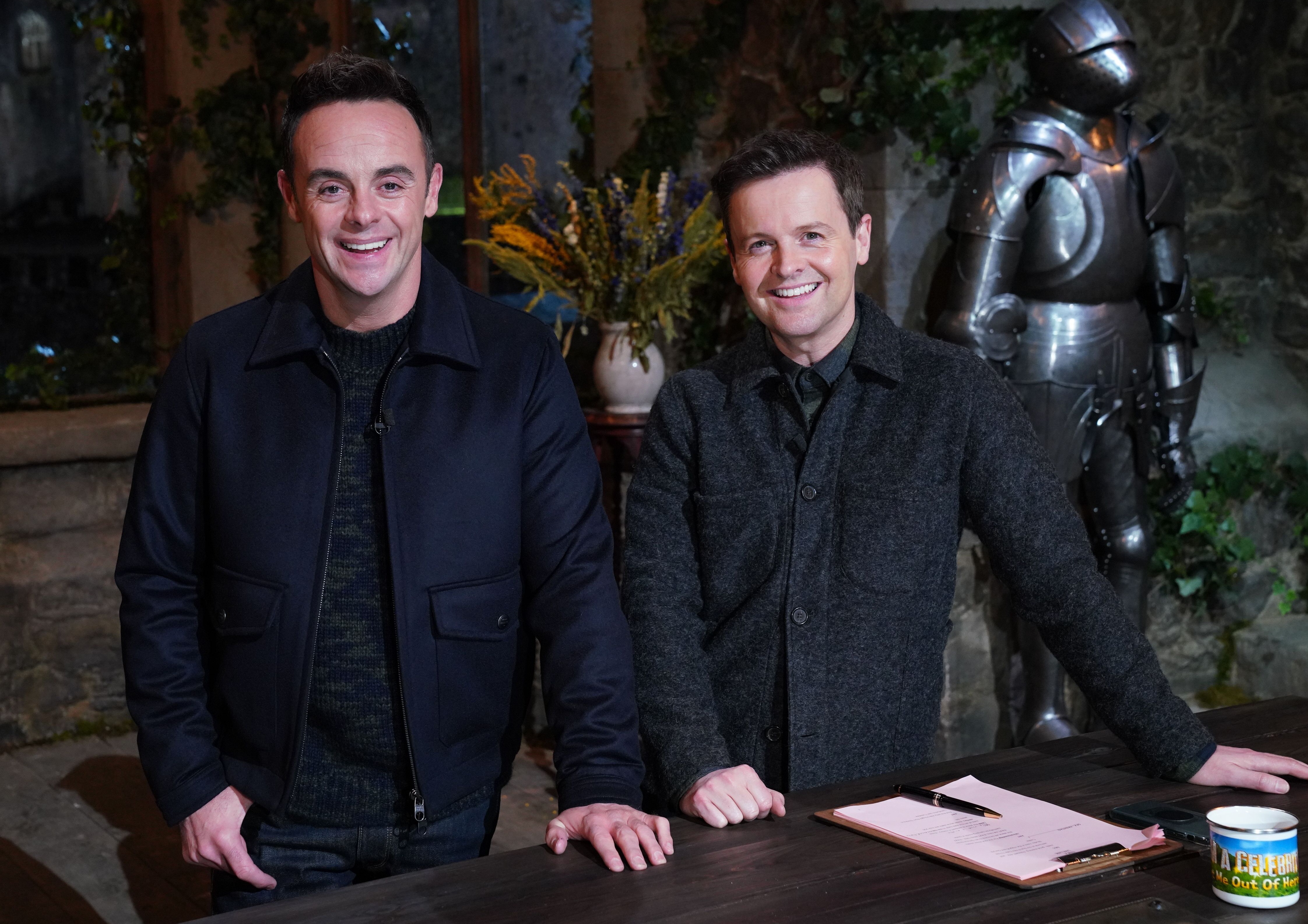 Ant and Dec stepped in to defend Beverley Callard – after the vegan star was seen munching a Scotch eggCredit: Rex Features

Taking to the presenters’ joint Twitter account, Dec responded to a viewer’s anger and wrote: “She got a vegan one tbf. D #imacelebrity.”

It’s not the first time Bev has faced the fury of I’m A Celebrity viewers over her veganism.

Last week, fans accused Bev of lying about being vegan to cheat her way out of eating gross bits of animal in a Bushtucker trial. 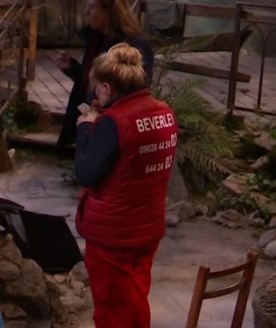 The meat-coated snacks were won in last night’s Castle Coin Challenge and she was seen tucking inCredit: ITV

Dec cleared up confusion about the treat and confirmed Bev’s was veganCredit: Twitter

The Coronation Street actress, 63, took part in the vomit-inducing Fright of the Round Table trial with Vernon Kay and Jordan North.

But she escaped horror plates such as sheep’s penis, cow’s tongue and deer testicles because she’s vegan.

Some viewers said Bev only revealed the dietary requirement to avoid the gruesome grub.

One viewer asked: “Didn’t she have rabbit and eel the two nights previous?!” 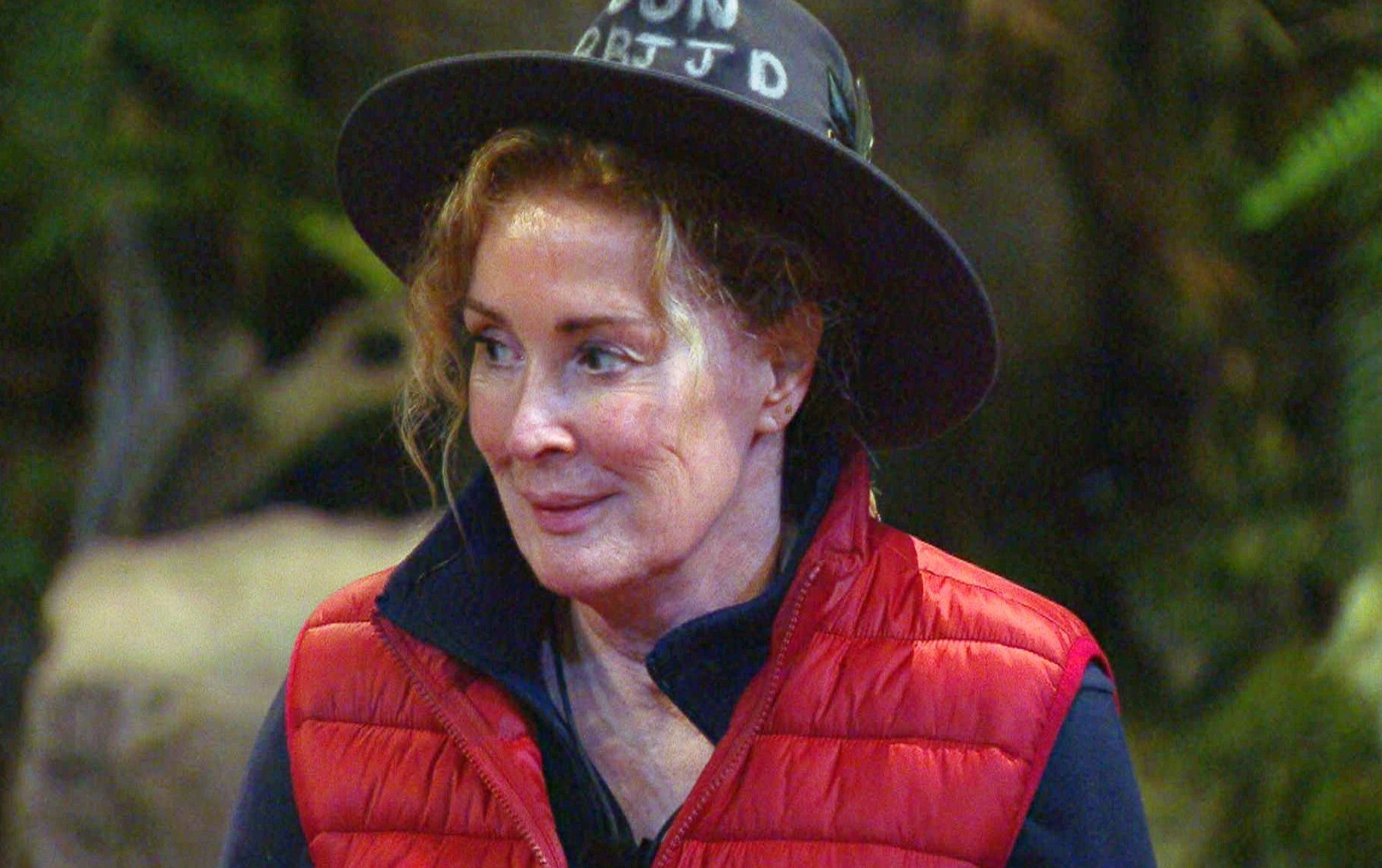 I’m A Celebrity fans have questioned whether or not Bev really is on the plant-based dietCredit: Rex Features

Another fumed: “Being a vegan is cheating on an eating challenge in I’m A Celeb surely? Fermented plums and tofu against testicles and penis?”

They grew even more suspicious when she revealed she’s only been following the plant-based diet since March.

However, The Sun revealed she turned to the diet before signing up for the ITV reality show.

The food she ate was also highly unpleasant, according to crew, and made two veteran workers ill.

Didn’t she have rabbit and eel the 2 nights previous?! ???

A source said: “Fermented plums and tofu are absolutely horrendous and will leave a taste in the mouth for hours afterwards. And vomit fruit is like eating your own sick. It’s not a walk in the park by any stretch.

“Bev has been a vegan since before she signed up for the show. So unless she had a crystal ball she hasn’t done it to cheat.”

The source added: “Some of the crew have worked on the show for years and test the trials every year. When they were running through this specific trial, the two people who had the dishes that Bev had to eat were both sick.

“The fermented plums and tofu are worse than any animal willy.” 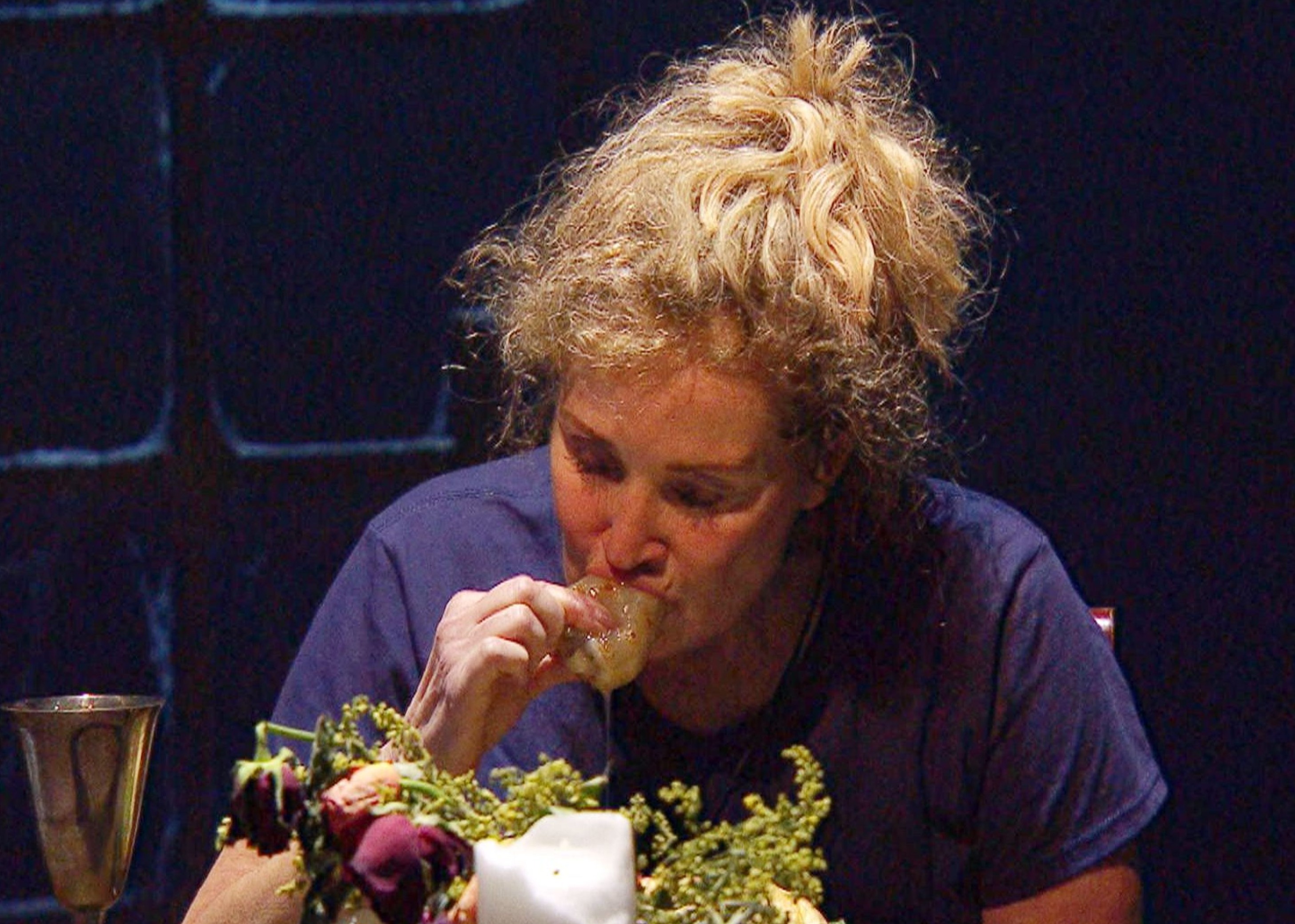 The Coronation Street actress, 63, took part in the vomit-inducing Fright of the Round Table trialCredit: Rex Features

Confused viewers pointed out she had been seemingly eating meat every night – with quail, eel and rabbit on the menu in the first three nights in Gwrych Castle, North Wales.

But we also revealed she has been secretly getting separate vegan portions at mealtimes.

A castle source added: “Most years there’s someone with an allergy, or a food preference, so producers always provide an alternative.”

Last week, Bev’s former Corrie co-star Simon Gregson joked that she had gone vegan “so she doesn’t have to eat animal willy.” 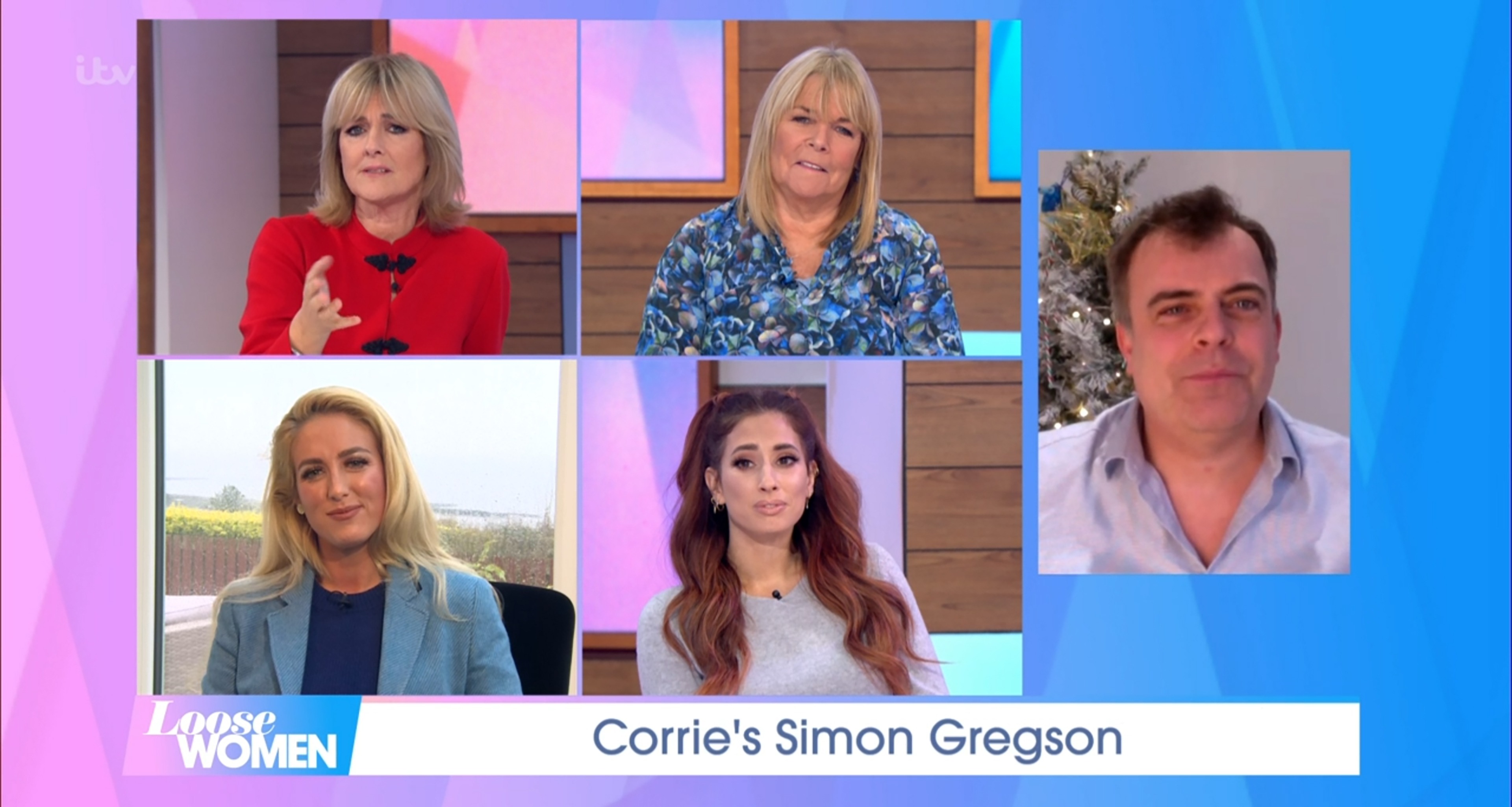 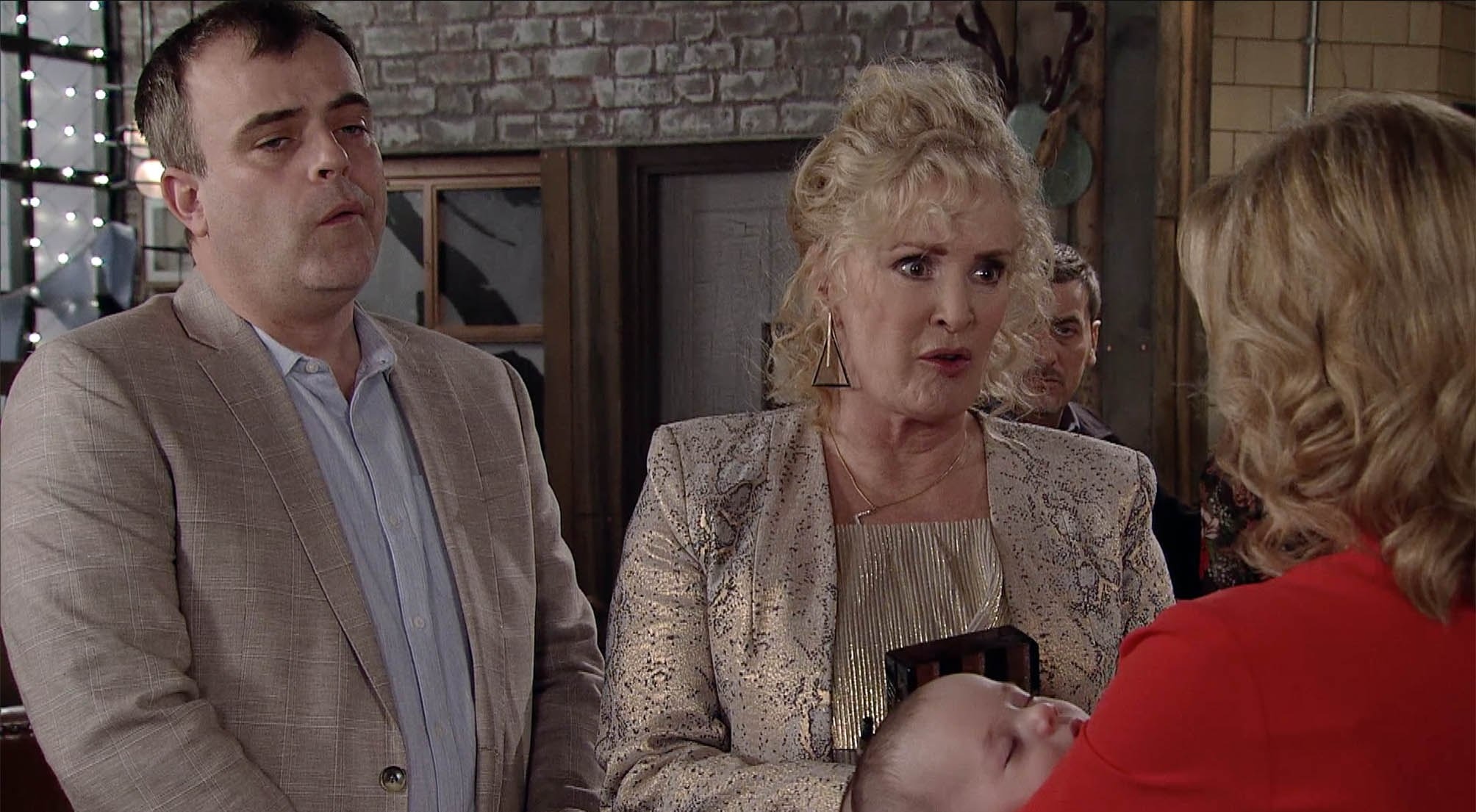 Simon has worked very closely with Beverly over the years

The 46-year-old Steve McDonald actor – who plays Bev’s on-screen son – opened up on Loose Women about how he thought his co-star is getting along on the popular ITV show.

During his stint on the daytime talk show, Simon was quizzed about Bev’s veganism, to which he replied: “Yeah! You see Rebecca her daughter is vegan.

“I’m sure Bev has done it for all the right reasons, health and to save the planet. If you believe that, I’m a mango!”

Presenter Linda Robson joked: “Are you sure so it’s just so she doesn’t have to eat anything disgusting?”

Simon, who has portrayed Bev’s on-screen son 21 years, added: “I’m pretty sure it’s because she doesn’t have to put a willy in her mouth, yeah.”

Bev made her first appearance on the popular ITV soap back in 1989, alongside co-star Simon as Steve McDonald.

Back in November 2019 it was revealed that the actress was leaving the show after 30 long years.